French politician and head of the 4th District of Paris Christophe Girard published and immediately deleted a post on his Twitter, in which he hinted that Russian President Vladimir Putin could somehow have been involved in the recent terror attack on the Champs Elysees in Paris.

The post said: "The terrorist attack in France a few days before the election! How strange! Ask, for example, a few questions to Mr. Putin."

The sentence was almost immediately deleted, but some Twitter users managed to make a screen shot and immediately responded to the move: "There is no point in deleting your tweets, we've seen them."

​Following the incident, Girard himself refused to give any comments to Sputnik France. However, Alexandre Vautravers, a terrorism expert at the Geneva Center for Security Policy (GCSP), revealed possible reasons behind absurd suspicions toward the Russian president.

"Those who don't have a program or a security concept immediately find themselves in a dead end and are forced to find quick explanations…. And when they have none, then speculations and conspiracy theories come into play: for example, that something has been influenced by the US or Moscow." 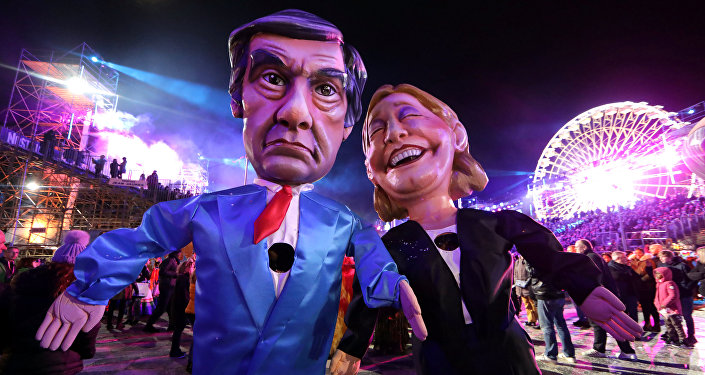 © REUTERS / Eric Gaillard
Paris Thursday Attack May Give Fillon, Le Pen Edge Over Rivals in Sunday Vote - Lawmaker
According to the expert, security should be part of an overall concept, which can't be invented overnight.

"I believe that in the current situation, the distrust toward [Presidential] candidates who downplayed or denied the reality of the terrorist threat as well as its connection with uncontrolled immigration… will grow," the expert argued.

In his turn, the chairman of the Christian Democratic Party, Jean-Frédéric Poisson, argued that the terrorist attack will not necessarily affect the preferences of the voters.

"Now the French condemn the terrorist act, but I don't know what kind of conclusions the voters will make," Poisson said. "The French are grown-up people and can choose those candidates who, they think, can better ensure security and make more efficient proposals to fight terrorism and radical Islam. From my point of view, the most reliable guarantees on all these issues are provided by François Fillon," the politician concluded.

© AFP 2019 / Tobias SCHWARZ
Merkel Expresses Solidarity With France After Paris Attack
On Thursday, a gunman opened fire on French police officers on the Champs Elysees in Paris, killing one law enforcement member and injuring two others, as well as a German tourist who was passing by. Daesh reportedly claimed responsibility for the attack.

Following the attack, François Fillon said that he intended to "fight terror with an eye and a fist," and promised to maintain the state of emergency and control the borders. Marine Le Pen said that the French authorities did not do everything necessary to protect the citizens.