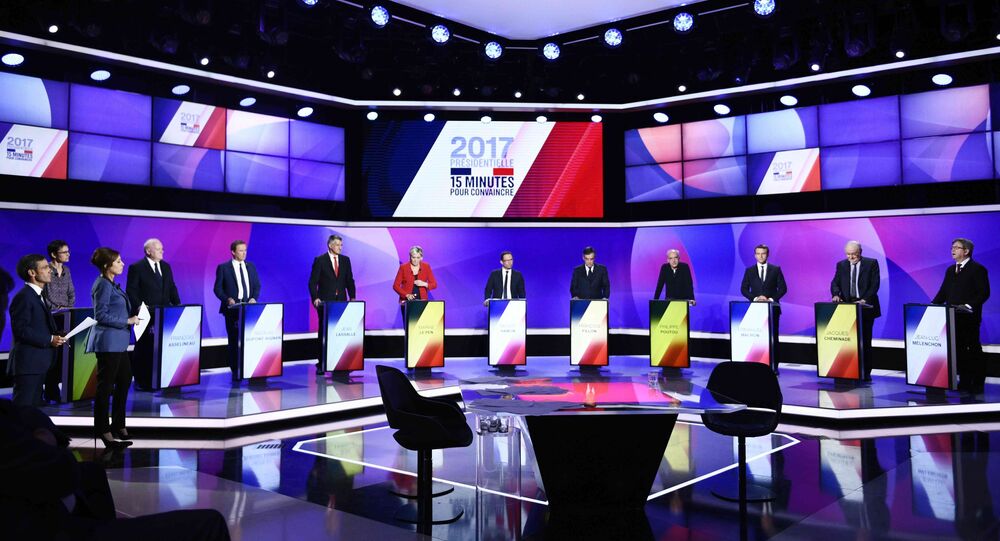 The first round of France’s presidential election takes place this weekend, and with it comes the chance that traditionally mainstream parties will be brushed aside by voters: candidates from the far-right and radical left are soaring in the polls.

© REUTERS / Charles Platiau
France Should Limit Ties With Saudis, Qatar Over Alleged Fundamentalism Support - Le Pen
The top two first-round finishers will proceed to a runoff election unless the frontrunner receives more than 50 percent of the vote. (Polls indicate that is not likely to happen.)

Fillon had been in low double digits after voters turned their backs on him due to allegations that he gave taxpayer-funded fake jobs to his wife and children. But recently he has surged and now is in serious contention to get into the second round.

"It's something that's exciting; progressive and left-wing people both in France and around the world [see it as] a major development," political analyst and Loud & Clear producer Walter Smolarek told the show's host, Brian Becker.

He pointed out that it is "highly significant" that far-left movements throughout the world are reviving.

"The fact that there are sort of new areas of growth for the left is something that is very significant, indeed," he said during an appearance on Radio Sputnik.

France's Melenchon is often compared in the media with the populist left candidate in last year's US election, Vermont Senator Bernie Sanders, who many say would have beaten now-President Donald Trump if Sanders had won the Democratic nomination.

"If you look at the latest opinion polls, [Melenchon] is just a couple percentage points off. It is… a huge accomplishment for him to rebuild the significant left poll," Smolarek said, implying that in France, the communist movement as the primary anti-facist resistance force has historically been strong.

According to Smolarek, if Melenchon or Marine Le Pen became president of France, it would be the end of the European Union "as we know it."

"It would have profound implications for the world and for Europe," he said.

At the moment, the race is tight, and any two of the top four candidates could end up in the runoff.

"The center is collapsing…There is a contest over whether or not people will take that frustration in a progressive direction, a left-wing direction, or if they'll retreat into xenophobia and neonationalism."

A Political Earthquake in France?