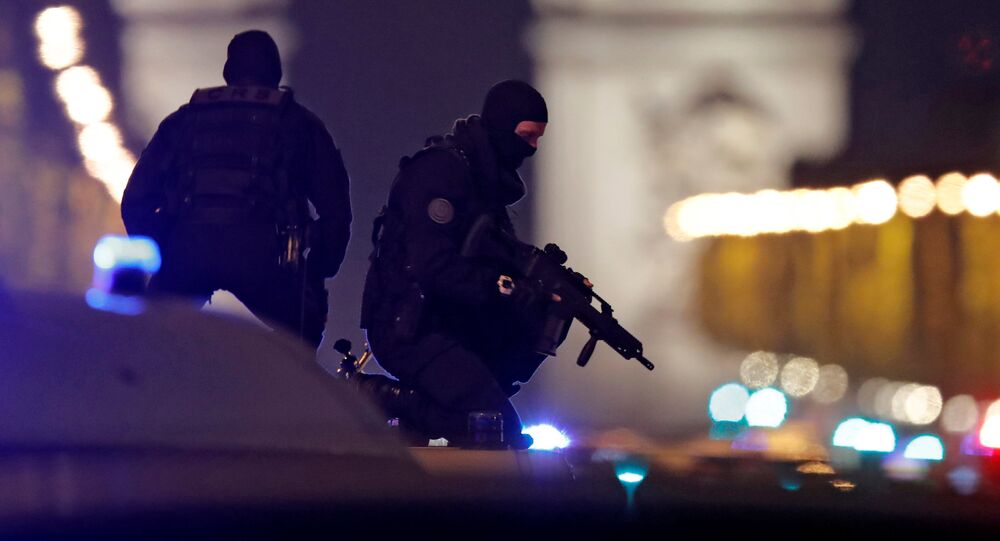 The French government said on Friday that the country's security forces are fully mobilized with 50,000 police officers and 7,000 army personnel being dispersed in order to ensure citizens' safety, ahead of the first round of the presidential election this weekend, and following on the heels of an attack on policemen in Paris.

© AP Photo / Kamil Zihnioglu
French PM Criticizes Fillon, Le Pen Security Stance in Wake of Paris Shooting
PARIS (Sputnik) — Late on Thursday, a gunman opened fire on French police officers on the Champs Elysees in Paris, killing one law enforcement member and injuring two others, as well as a German tourist who was passing by. Daesh, banned in Russia, reportedly claimed responsibility for the attack.

France's President Francois Hollande and Prime Minister Bernard Cazeneuve held an emergency meeting of security officials earlier on Friday to discuss security measures on the day of the election.

Emerging from the meeting, Cazeneuve said citizens should not succumb to fear following the attack and announced a full mobilization of security forces to back up 50,000 policemen already deployed to ensure safety during the election.

"The government is fully mobilized. In the coming days more than 50,000 of police officers and the gendarmery will be in place to insure a safe and calm election. Nothing must be allowed to impede the fundamental democratic process of our country," Cazeneuve said.

In addition to 50,000 police officers, some 7,000 soldiers will be also on patrol Sunday, according to a previous government statement. They are a part of a special security unit which provides antiterrorism surveillance, launched in January 2015 after the attacks on the offices of the satirical newspaper Charlie Hebdo and the kosher market in Paris.

© Sputnik / Irina Kalashnikova
Macron Urges French Voters Not to 'Give In to Fear' After Paris Shooting, Vote for Him
According to local media reports, the mayor of Paris, as well as mayors of smaller French towns have announced they intend to hire private security guards to be stationed outside the polling stations.

The mayor of Nice also plans to place a security guard outside all 250 voting stations, French media reported on Friday. This decision was made when earlier this week police announced they had foiled a terror plot in Marseille, arresting two suspects who were planning an attack to undermine the election.

Thursday's assault on policemen in Paris, with less than three days remaining until polls open on Sunday, has brought national security and terrorism concerns to the forefront of voters' minds.