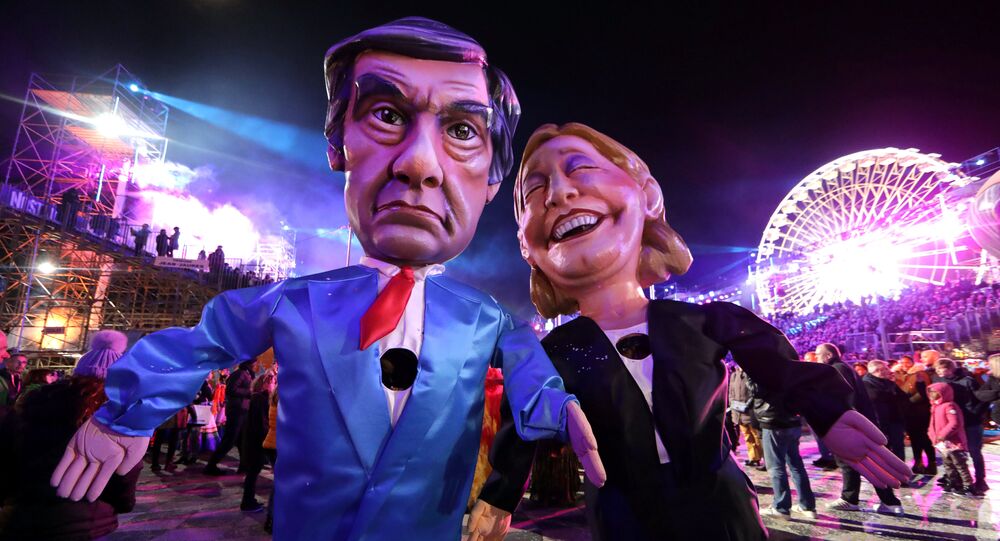 The attack on policemen in Paris may boost the chances of conservative candidates such as The Republicans party nominee Francois Fillon and far-right National Front presidential candidate Marine Le Pen, who advocate tougher security and anti-terrorism cooperation, a French lawmaker told Sputnik Friday.

© AP Photo /
Paris Prosecutor Confirms Paris Gunman Left Note Defending Daesh
MOSCOW (Sputnik) — On Thursday, a gunman opened fire on French police officers on the Champs Elysees in Paris, killing one law enforcement member and injuring two others, as well as a German tourist who was passing by. Daesh reportedly claimed responsibility for the attack. Following the attack, Fillon said that he intended to "fight terror with an eye and a fist," and promised to maintain the state of emergency and control the borders. Le Pen said that the French authorities did not do everything necessary to protect the citizens.

"I think it can give an impetus to Fillon and Le Pen, because this symbolic attack brings up terrorism and security issues on the forefront. It may boost support for more realistic candidates and by that I mean candidates which are not saying that we should open our arms to everyone," Nicolas Dhuicq, who is a member of The Republicans party, said.

© AP Photo / Kamil Zihnioglu
French PM Criticizes Fillon, Le Pen Security Stance in Wake of Paris Shooting
According to the lawmaker, Fillon, who is tough on terror and crimes and who promised to make the freedom and security of the French people a priority of his administration, is the best fit for a country which has been living under a state of emergency since 2015.

"Fillon wants to toughen laws against those extremists who are listed in the S files [terrorist watch list], and he is the only candidate with an understanding that jihadists with French citizenship who are returning to France after fighting alongside Daesh in Syria, must be put into jails," Dhuicq said.

Dhuicq stressed that in order to prevent future terror attacks, France needs stronger ties between states fighting against extremism in all its forms.

"We need stronger ties between Russia and France, Russian and the EU, Russia and Washington and so on, so we can share files [terrorist watch lists]. France needs to change its foreign policy and forge an alliance with Moscow on Syria," he noted.

During the last round of the French presidential debates, which took place Thursday, Fillon said that counterterrorism would be the issue of highest priority for the next country's president and called for a broad international coalition against terrorism adding that it was impossible to defeat it without the cooperation of Russia and a dialogue with Iran.