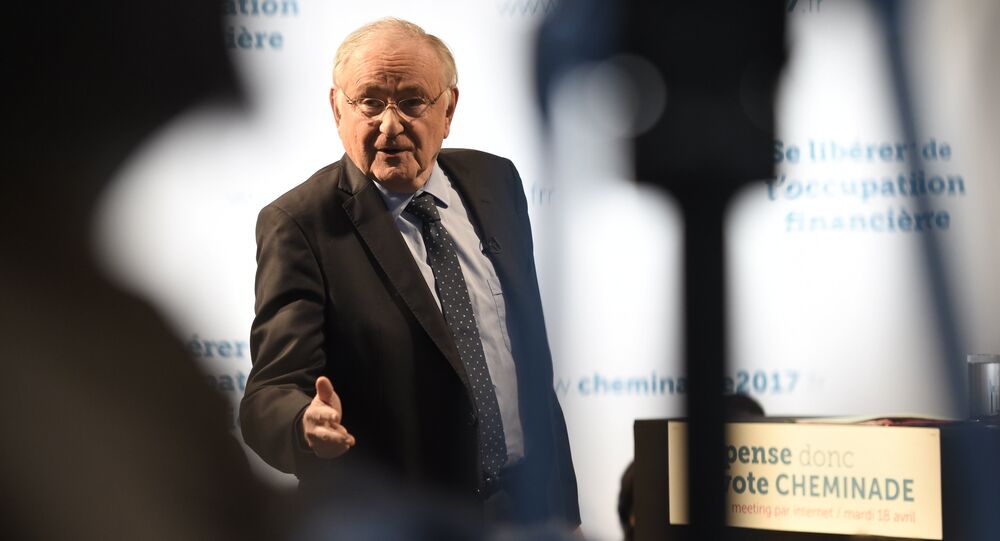 Cheminade 'Wants to Become Catalyst for Alliance' Against Financial Occupation

Today's "Europe is a fraud" serving "a world power of finance", according to French presidential hopeful Jacques Cheminade.

PARIS (Sputnik) — French presidential hopeful Jacques Cheminade, the founder of the Solidarity and Progress party (Solidarite et Progres), seeks to become a "catalyst" for a movement against EU-backed financial globalization and the "financial occupation of France."

"I want to become a ‘catalyst’ for a new alliance against financial globalization … and the destructive global financial policies. We need to free France from the current banking system by adopting a new one, which would separate investment and commercial banking activities and by giving France back its monetary, economic sovereignty," Cheminade told Sputnik.

© AP Photo / Ford Williams/U.S. Navy
Fillon: Trump's Policy Reminds of 'the Wild West - Shoot First and Then Discuss'
Cheminade said he intended to make France completely independent in the management of its economic affairs, adding that the country's public debt was nearing 100 percent of its economic output.

The presidential hopeful pointed out that he advocated the idea of massive public credit which could be used for "peace and for mutual development to the benefit of all the people on the European continent and beyond."

"In 1979, France's external debt was 230 billion euros [some 246 billion]. Today, it is 2,170 billion euros, because we always pay interest on loans. That is, we get into debt to pay our interest. This is what I call a financial occupation… I advocate for France to allocate 100 billion euros as a public credit that would create jobs. This will solve the problem of unemployment. While Europe makes money for banks, we will use them for building the country’s future," Cheminade said.

Cheminade stressed that he was not a Euroskeptic but did believe that the European Union in its current form was only benefiting the financial sector and not the general public.

"The current Europe is a fraud. It works for a world power of finance. Half of the European commissioners after leaving the office start lobbying for the area of interest in which they were previously engaged," he said.

Cheminade further called for returning to "a real Europe" and a "Europe of great projects."

The first round of presidential election in France is set for Sunday. According to Tuesday's OpinionWay poll, independent candidate Emmanuel Macron is projected to win the first round with 23 percent of votes, while far-right nominee Marine Le Pen is expected to come second with 22 percent. Cheminade himself is not seen as the main contender.