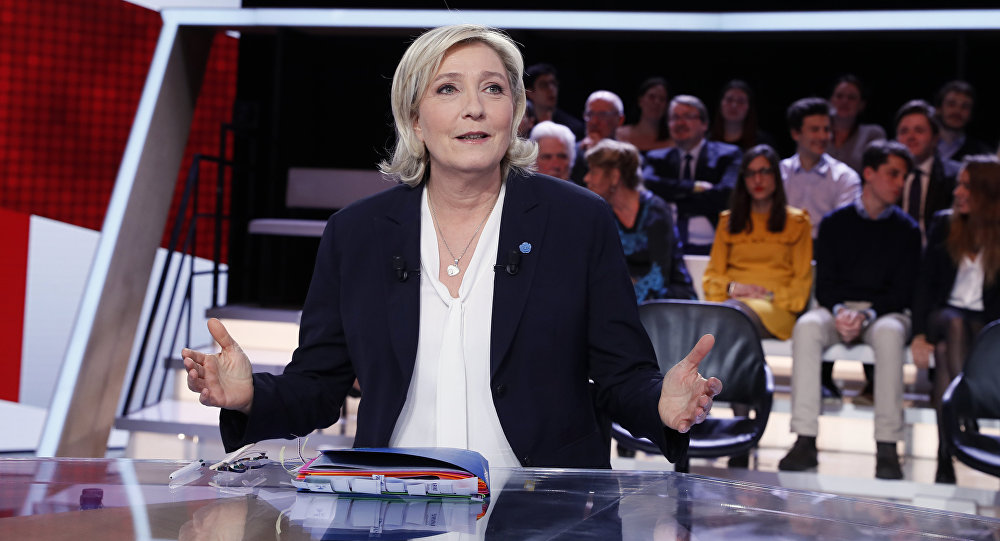 French Front National (FN) supporters are unlikely to heed the advice of twelve Nobel prize winners who have denounced its party leader Marine Le Pen's plans to stop all immigration and hold a referendum on EU membership as "dangerous" and a threat to the French economy and the European Union, Sputnik has been told.

Le Pen has long been calling for France to take back possession of its sovereignty and curb the powers of Brussels and has promised t6o hold a referendum on EU membership if she wins the presidential election, the first round of which is April 23. She has also said she would protect France from the powers of globalization, taking France down an isolationist road.

"I will protect you. My first measure as president will be to reinstate France's borders. The choice on Sunday is simple. It is a choice between a France that is rising again and a France that is sinking," she told a rally April 17.

Scenes from @MLP_officiel rally in Paris last night. Will the pollsters come unstuck for the third time in a year? #Brexit #Trump #LePen pic.twitter.com/RhcTLB9GZZ

​"Fight for victory, until the very last minute. If every patriot can this week convince just one abstentionist, just one undecided voter, we are sure to win! Mass immigration is not an opportunity for France, it's a tragedy for France," she said, encouraging the crowd to boo the EU and its Schengen open borders area.

However, in a letter to Le Monde newspaper, the twelve academics — all of whom have won the Nobel prize for economics — said that European integration is "essential not only to maintain peace on the continent but also for the economic progress of member states and their political power in the world".

"I think Le Pen voters — of all people — are not likely to heed these warnings for two reasons. It plays into the narrative that Le Pen propagates that the establishment is against whatever the FN is proposing and especially what the FN proposes in relation to the EU — the euro, Frexit etc.," Professor James Shields, Professor of French Politics and Modern History at the UK's Aston University told Sputnik.

© REUTERS / Patrick Kovarik
Macron, Le Pen Running Neck-And-Neck in 1st Round of French Presidential Elections - Poll
"The evolutions proposed by the anti-European programs would destabilize France and would call into question cooperation between European countries, which today ensures economic and political stability in Europe," the academics wrote.

"Isolationist and protectionist policies and competitive devaluations, all at the expense of other countries, are dangerous means of trying to generate growth. They lead to reprisals and trade wars. In the end, they will prove detrimental to France and its trading partners.

"When they are well integrated into the labor market, migrants can be an economic opportunity for the host country. Several of the most prosperous countries in the world have been able to welcome and integrate emigrants," they wrote.

​Tweet: "A few days before the presidential election, I send you this message: on April 23rd, do not be deceived!"

"Le Pen voters don't — by and large — tend to engage with politics on that level. Her support base is largely engaging with her about the big, crude notions of national identity, immigration, jobs, protectionism and they are — in many cases — a constituency that are poorly-off and not particularly well-informed, don't follow the news closely and, therefore, unlikely — in the main — to be affected by this. And I won't see Marine Le Pen's support dropping one iota," Prof. Shields told Sputnik.

Opinion polls have for months shown Le Pen and the center-ground ex-finance minister Emmanuel Macron qualifying for the May 7 run-off, but the gap with conservative Francois Fillon and far-leftist Jean-Luc Melenchon has been tightening.