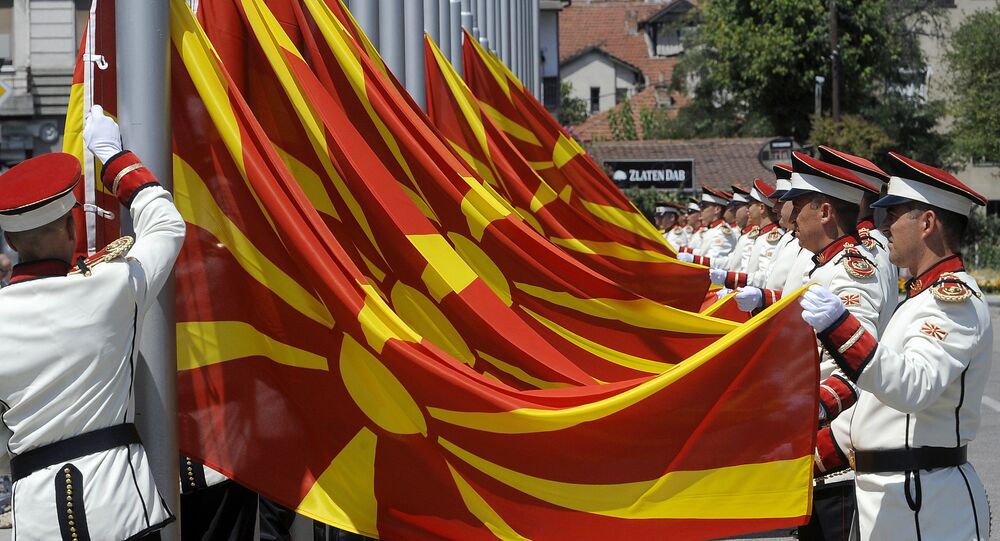 Macedonia, one of the successor states of the former Yugoslavia, has been marred by a long-running political crisis, which has once again raised ethnic tensions between Macedonians and ethnic Albanians. Political analysts interviewed by Sputnik Serbia examine the crisis and explain how it has long been manipulated by the West.

Macedonia has been marred by a political crisis for two years now, and there seems to be no light at the end of the tunnel. The situation deteriorated on March 1 when President Gjorge Ivanov, who was elected head of state as VMRO-DPMNE’s candidate, refused to grant Social Democratic Union of Macedonia (SDSM) leader Zoran Zaev the mandate to form a government, despite the opposition leader having secured a majority in parliament with ethnic Albanian parties.

Supporters of the right-wing VMRO-DPMNE party then took to the streets bearing cardboard shields, painted in the national colors, red and yellow, to display dislike for the Social Democratic Union of Macedonia (SDSM)-led coalition government.

Sputnik Serbia took a closer look at the crisis and interviewed a number of political analysts who described how the country has been the victim of Western manipulation.

Macedonia is the only country which peacefully seceded from Yugoslavia through a referendum of 1991, when the rest of the post-Yugoslavian space was engulfed by violence and was drowning in bloodshed.

The West, which had been working hard to split Yugoslavia, has ever since held up Macedonia to the rest of the world as an example of a peaceful solution to a political crisis.

© AP Photo
Macedonian Conflict: 'Greater Albania' Used by West to Destabilize Balkans
The authorities in the Macedonian capital of Skopje then vowed to participate in the processes of Euro-Atlantic integration, much to the applause of the West, which granted the country the status of NATO aspiring member state back in 1999.

In 2001, the country was marred by an armed conflict with Albanian separatists, which ended with the Ohrid Framework Agreement, granting the Albanian minority greater rights than usually given to minorities.

Skopje signed the agreement under the soft pressure of the West in exchange for the status of an EU candidate member state.

© AP Photo / Boris Grdanoski
A protestor holds the flags of the United States, Macedonia, Albania and the European Union while attending a march through downtown Skopje, Macedonia, Monday, April 18, 2016

It expected Brussels to find a solution to the Greek veto, however the international community seems to have had a change of heart.

Back in May 2015, the issue of ethnic tensions within Macedonia gained global headlines once again, after eight police officers and 14 others were killed during a two-day shootout between police and an armed paramilitary group of ethnic Albanians in the northern city of Kumanovo.

The events might have sobered the Macedonians, who understood that their authorities were no longer favored by the West. At that particular moment a new opposition figure appeared on the arena, namely Zoran Zaev, and the Albanian factor intensified.

With the success of 2001 in mind, the Albanian minority is now demanding a confederation, basically a change of the state structure of Macedonia, which currently remains a unitary state.

The crisis deteriorated after Skopje refused to impose sanctions on Moscow. In April 2016, the country was engulfed in protests against the incumbent President  Gjorge Ivanov and the government led by the interim Prime Minister Emil Dimitriev from the ruling VMRO-DPMNE party.

© REUTERS / OgnenTeofilovski
A demonstrator is seen with his face painted in support of a "colorful revolution" during a protest against the government, in front of the EU office in Skopje, Macedonia April 21, 2016.

Referred to by some as the "Colored Revolution,", the protests began after a controversial decision by the President to halt an investigation into former Prime Minister Nikola Gruevski and dozens of politicians who were allegedly involved in a wiretapping scandal.

The demonstrations were organized by "Protestiram" (I protest) and supported by a coalition led by the Social Democratic Union of Macedonia, and other opposition parties.

The December parliamentary elections, which were originally planned for April 24 and later June 5, were called as part of an agreement brokered by the European Union to end the protests against the government of Nikola Gruevski. The ruling VMRO-DPMNE maintained a small majority, however Zoran Zaev formed a coalition with ethnic Albanian parties and secured a majority in parliament.

He is now insisting on a mandate to form the government and has put forward the so-called "Albanian Platform", (or "Tirana Platform", after Tirana, Albania, where it was put together) a set of Albanian conditions for their participation in any new Macedonian government.

The Albanian Platform, according to the local media, could lead to a "series of moves that divide Macedonia on ethnic lines, into cantons or federal units."

Commenting on the situation in the country, Aleksandar Gajic, political analyst at the Institute of European Studies in Belgrade told Sputnik that Macedonia, in its current unitary, independent and sovereign state, might have been only buying time from the West, which now wants not so much to punish Skopje for its disobedience as to reward their faithful ally, the Albanians.

"It is clear that the Albanians want to re-consider the borders of the states in the region, starting with the separation of Kosovo and Metohija, then creating Ilirida on the territory of Macedonia and Chameria in Greece, and then annexing part of Montenegro where they also have territorial claims," he told Sputnik.

He also called Macedonia a victim, which is being sacrificed for the sake of greater strategic purposes.

"Macedonia has fallen out of favor after it tried to defend its territorial integrity and constitutional order and after its attempts to strengthen its economic and political relations by supporting some geopolitical processes. I'm talking primarily about the construction of a gas pipeline within the Turkish Stream project and further cooperation with other Slavic nations in the Balkans," he said.

He also suggested that the EU and the US in many ways are trying to support the claims of Albanians for the remodeling of Macedonia and turning it into a binational state, which could be easily separated at any moment and re-named for the sake of further Euro-integration.

"However, it won't be the state of the Macedonians any longer but an entity, one part of which will under the rule of the Albanians and the other – under those who obey the West against the will of the Macedonian people," he stated.

Aleksandar Mitovski, Director of the Center for Research and Analysis in Skopje also agrees that the West has been manipulating Macedonia for more than two decades now.

© AP Photo / Boris Grdanoski
Balkan Knot: Macedonia's Political Crisis Threatens to Redraw European Borders
He reminded Sputnik that back in 1992 the West promised his country that its name would be changed soon, but it still remains the same.

"Macedonia has been always obsequious and servile towards the West. Let's recall the protests when the authorities allowed NATO jets to use Macedonian air bases and fields to bomb Yugoslavia, however the authorities pursued with their decision," he told Sputnik.

"They know in the West that the ethnic conflict is Macedonia's sore spot which it can push at any time and get what it wants. This is exactly what is going on right now," he concluded.