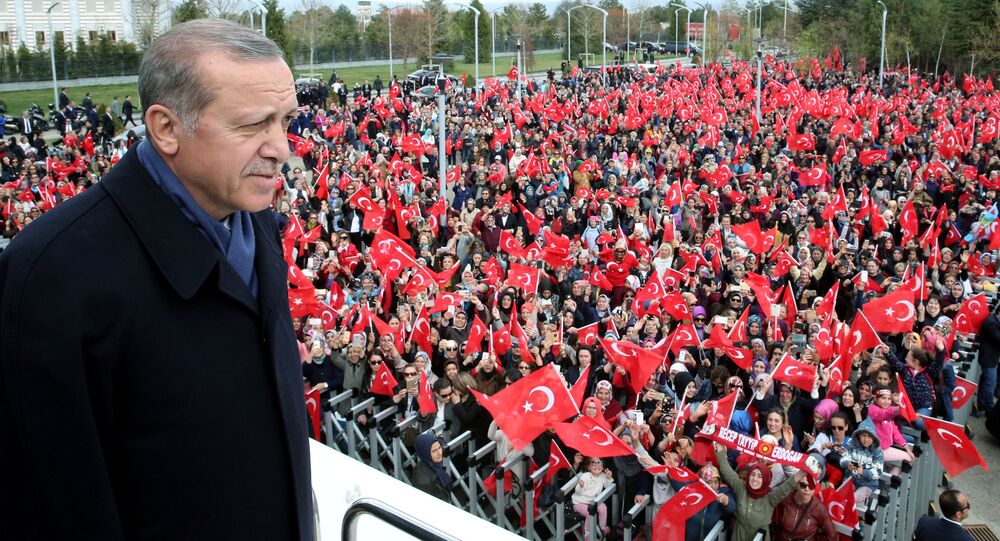 Members of the European Parliament (MEPs) have closed ranks in calling for negotiations over Turkish accession into the EU to be halted in the wake of the referendum in Turkey which is set to hand huge powers to its President, Recep Tayyip Erdogan.

© Fotolia / Megastocker
Deterioration of EU-Turkey Relations to Harm Cyprus Reunion Process - Ambassador
Turks voted, April 16, to accept controversial changes to the country's constitution — effectively handing him more power — with a new executive presidency replacing the office of the prime minister, as well as allowing him to appoint judges.

However, critics say it is a power-grab by Erdogan, which is already under fire for his clampdown on the  media and opposition supporters — especially following the failed coup, July 2016. Critics say his actions put Turkey at odds with the EU's principles of freedom of the media and political expression, as well as its rule of law policy on independent judiciaries.

The EU has been a force for change, turning dictatorships into democracies, but there is much work still to do. #IamEuropean pic.twitter.com/GS9il31Fdq

​"The proposed constitutional changes do not only grant President Erdogan authoritarian powers, they also disrupt the democratic checks and balances in Turkey and the referendum on which they are based didn't meet the standards of the Council of Europe," said former Belgian Prime Minister and leader of the Liberals and Democrats in the EU Parliament, Guy Verhoftsadt.

"A fair campaign has been prevented by the Turkish government who intimidated the "no" side and even resorted to jailing dozens of journalists. The Organisation for Security and Co-operation in Europe (OSCE) confirms that both media and opposition parties have been boycotted by the Turkish government, thus precluding a level playing field between the "yes" and "no" sides," he said.

"On top of that, the outcome was very tight. Turkey's big cities, for example, clearly voted against changing the constitution. The only logical conclusion of this all is that the EU stops accession talks immediately and rethinks its relationship with Turkey."

"Another harsh blow against democracy and rule of law has been dealt in Turkey. This is yet another decisive step away from Europe. Erdogan has closed his doors to the EU with this referendum. The EU accession talks should be suspended once Turkey decides to implement the 18 constitutional amendments," said Socialists and Democrats Group president Gianni Pittella.

"We must stand side by side with all those Turkish citizens who are still striving to bring their country towards a rapprochement with the EU. However, it is clear that the strengthened economic cooperation that Erdogan so aspires to cannot happen so long as he continues to lead Turkey in an ever more oppressive direction," said Greens/European Free Alliance co-president Ska Keller.

#TurkeyReferendum: EU must stand on the side of those who, despite intimidation, have stood up for democracy: https://t.co/jAnj62aOPH

​"Negotiations over the modernization of the customs union must not be opened until Erdogan has proven he is willing to make concessions and return to democracy,"

If talks do break down, it will put the EU-Turkey migrant deal — already under severe pressure — at risk, which could lead to another exodus of migrants into Europe. Under the deal, Turkish accession to the EU would be accelerated in return for Turkish assistance in curbing the number of migrants crossing into Europe.