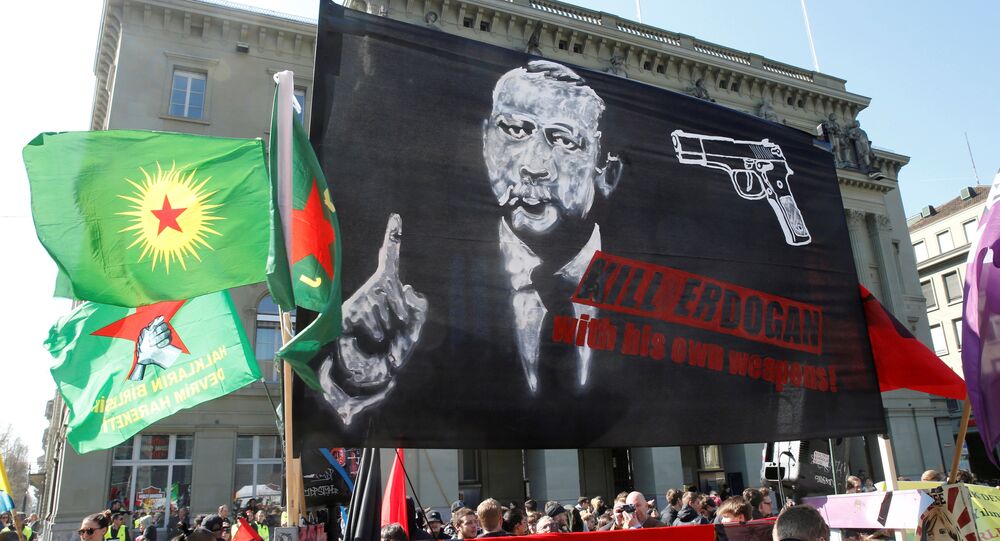 'Grave Digger of the Turkish Republic': What Germany Thinks About Erdogan Win

The victory of President Recep Tayyip Erdogan's constitutional reforms in Sunday's referendum is being seen in Germany as the death of the modern Turkish Republic, Sputnik Germany reported.

© REUTERS / Stringer
Turkey's Vote: 'No One Happy With Results of the Referendum, Even Erdogan'
On Sunday, Turkish President Recep Tayyip Erdogan celebrated victory in a referendum which asked Turks if they supported constitutional reforms giving the President a range of new powers.

In Germany, where the media is already critical of Erdogan's post-coup crackdown, the result is being viewed as the end of the modern Republic of Turkey that was founded by Mustafa Kemal Atatürk, Sputnik Deutschland reported.

Writing in the German newspaper Die Zeit, columnist Lenz Jacobsen points out that Erdogan and his supporters began celebrating their victory before the results of the referendum had even been counted.

"It is precisely this that makes the evening so symptomatic of the state of the country," Jacobsen wrote.

"Erdogan announced his victory nevertheless. He and his followers don't care about reliable, verifiable facts, nor about a peaceful coexistence in the country. They have split Turkish society into victors and vanquished and enforced poll results rather than leaving the people their sovereignty. If you are not willing, then I need (to use) violence."

Turkey's public institutions were not strong enough to stop Erdogan, who has purged the judiciary, police force, armed forces, interior ministry, media and educational institutions in the aftermath of July's failed coup.

© REUTERS / Umit Bektas
Why Erdogan Terminated Euphrates Shield Operation in Syria
The divisions within Turkey are demonstrated by the closeness of the result and the rejection of the proposals by a majority of voters in Istanbul, Ankara and Izmir. Erdogan was unable to get as many votes as his Justice and Development (AKP) and the far-right Nationalist Movement Party received in the 2015 parliamentary elections, Jacobsen noted.

"The vote shows the division of the country and therefore is actually no mandate to fundamentally rebuild it. Constitutional changes require particularly broad approval."

"All this damages the legitimacy of constitutional change. But these are unsuitable, democratic standards for an authoritarian ruler like Erdogan. Legitimacy does not matter to him."

"For years, the President has promised a 'new Turkey.' This was supposed to unite the almost hundred-year-old Turkish republic with the imperial Ottoman past. In fact, Erdogan is the grave digger of the Turkish Republic. What Mustafa Kemal Atatürk once began, now comes to an end," Jacobsen wrote.

Writing for the German website Der Spiegel, Maximilian Popp called the result a historic one, which Germany and the EU should fight with its tools of soft power.

"This is not just a constitutional reform, as the Turkish government claims, but a revolution, a putsch from above that sweeps aside democracy and transforms Turkey into a one-man state. April 16 will go down in history as the day when the Republic of Atatürk was abolished and replaced by the state of Erdogan."

© REUTERS / Fabrizio Bensch
Merkel Urges Ankara to Seek 'Respectful Dialogue' With Opponents in Turkey
Popp recommends that Berlin tie up aid for Turkey with commitment to democracy, and the EU, which is negotiating a customs agreement with Turkey, should force concessions on human rights in return for Turkish firms' ability to export their goods to Europe.

"Secondly, at the same time the EU should encourage Turkish civil society more than before. It should invest in bilateral initiatives – in programs for NGOs, trade unions and lawyers. Journalists and academics who are persecuted in Turkey should be able to find refuge in Europe. The visa requirement for Turks entering the EU should finally be abolished," Popp suggests.

According to preliminary results from Turkey's election board, 51.4 percent of voters voted in favor of the changes. However, Turkish opposition parties have said they will contest the result, alleging electoral irregularities.

Erdogan, who was previously Turkish Prime Minister for 11 years, took over the office of President, which had been a largely ceremonial role, in 2014.

As a result of the constitutional changes, most of which will come into effect after the next presidential elections due in 2019, Erdogan has the power to declare a state of national emergency and interfere in the judiciary.

The office of Prime Minister has been scrapped and Erdogan will be able to directly appoint public officials, including cabinet ministers and some vice-presidents.