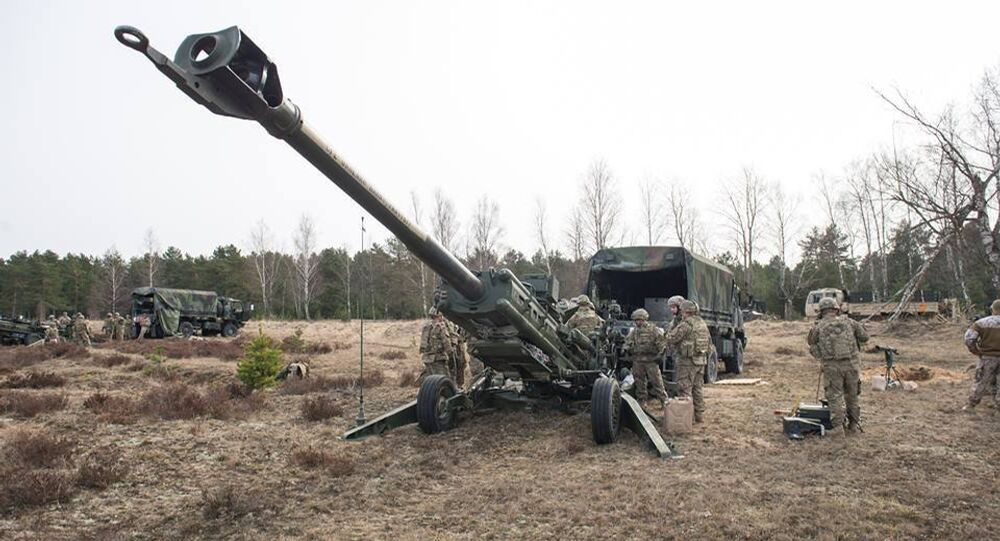 NATO kicked off its 'Summer Shield' exercises in Latvia Monday, with 11 alliance members plus Sweden to drill until the end of the month. Speaking to Radio Sputnik, military observer Boris Podoprigora suggested that even more significant than their military component was the drills' role in support of Western powers' propaganda war against Russia.

The Summer Shield drills, involving over 1,200 troops from the Baltic states, the US, the UK, Germany, Canada, Luxembourg, Bulgaria, Romania, Slovakia, and NATO partner Sweden, will run from Monday until April 30th at the Adazi training area just outside the Latvian capital of Riga.

© REUTERS / Kacper Pempel
Not What 'Poles Dreamed of': MSM Hushes Up Numerous Scandals Involving US Soldiers in Poland
According to organizers, the ambitious exercises include training in artillery support, intelligence gathering, engineering, air defense, anti-tank defense, and the use of measures against weapons of mass destruction.

Summer Shield has been run annually in Latvia since 2004, the same year that the country joined the NATO alliance. Troops from other NATO countries have been participating in the exercises since 2014, when relations between Russia and Western countries deteriorated over the instability in Ukraine. Over 1,300 troops took part in last year's drills, with the US and its allies gradually building up their presence across Russia's borders with troops and heavy military equipment.

Given the limited size of the contingent of NATO troops involved in the drills, some observers have suggested that drills like Summer Shield have more of a psychological significance than a military one.

© AP Photo / Oksana Dzadan
Three US Soldiers Get Poisoned During Military Drills in Latvia – Latvian Defense Ministry
Asked for comment, political scientist and military observer Boris Podoprigora told Radio Sputnik that they were undoubtedly an element of a propaganda war against Russia by NATO.

"I'll give you one example," the commentator noted. "Recently, I had a chance to participate in negotiations to develop a [Russian-Latvian] partnership in the tourism sector with a Latvian entrepreneur. Negotiations were proceeding normally. Then, unexpected, our Latvian guest told us that it's time for him to head back to Latvia, where 'dugout shelters need digging'."

"I was surprised, and asked him what he meant. He answered, 'Well, while your 76th Airborne Division in Pskov makes preparations to jump [into Latvia], during my vacation time and on the weekends I dig dugouts for the forest brothers.'" (The 'forest brothers' were groups of guerrillas in the Baltic region who fought a guerrilla war against the Red Army after WWII).

"Can you even imagine the degree of stupidity here?" Podoprigora asked. "People really believe in these horror stories" (about the Russian boogieman). "And these [NATO drills] are held to support this faith," he added.

© AP Photo / Alik Keplicz
Trump Supports Stationing More NATO Troops in East Europe - Stoltenberg
And there is another, reason for the drills, the observer added. It has to do with the effort to influence the worldview of US President Donald Trump. "The goal is to slip him a piece of paper, a memorandum, which says that the Baltic countries are trembling at the sight of Russia. This is a way to influence the recently elected president," Podoprigora noted.

"But this comes second. The main thing is to maintain the current level of hatred toward Russia. And believe me, it works!" the observer lamented.

International NATO Drills to Kick Off in Latvia on Monday

MSM Hushes Up Numerous Scandals Involving US Soldiers in Poland

Three US Soldiers Get Poisoned During Military Drills in Latvia – Ministry