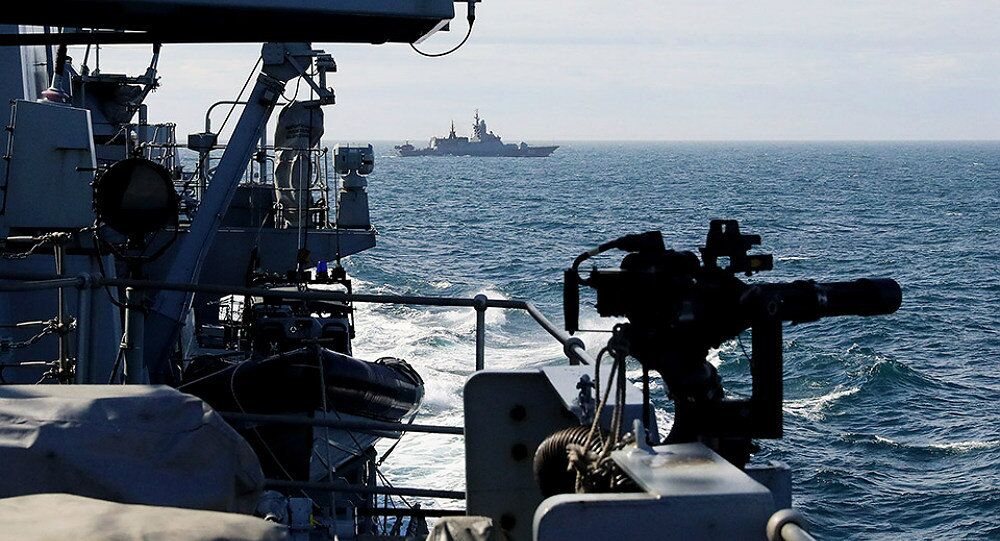 Over the weekend, a British Royal Navy frigate escorted four Russian ships as they sailed through the English Channel on their way to the Atlantic Ocean. The Russian ships were using the free right of transit passage through the body of water. However, British tabloids soon attempted to blow the non-story up into a major diplomatic incident.

On Saturday, the UK's Ministry of Defense issued a statement saying that the HMS Sutherland, a Type 23 frigate armed with anti-ship, anti-air and anti-sub missiles and advanced electronic warfare systems, had been given the task of escorting and monitoring a Russian naval group consisting of two corvettes, a tanker and a tug boat as they sailed through the English Channel later in the day.

Defense Secretary Michael Fallon emphasized that the HMS Sutherland would be "carefully marking these Russian ships as they pass close to UK waters," adding that "the Royal Navy maintains a vigilant watch and is always ready to keep Britain safe."

© Photo : Vicki Benwell, Royal Navy
British Frigate Set to Escort Russian Warships in the English Channel
'Safe from what?' may be the first question that springs to mind. The Russian vessels, including the Soobrazitelnyy and Boiky corvettes, along with a support tanker and an ocean-going tug, were using their right for lawful passage through the international waterway, on their way to the North Atlantic for drills. No incidents or violations of maritime law, or of the UK's maritime boundaries, have been reported.

However, if the British tabloid press's coverage of the 'routine' event is to be believed, the Russian ships' mission was much more sinister, aimed either at 'taunting' Britain, or worse –preparing for an open provocation.

The Daily Mail, for example, prefaced its headline on to the story with the phrase "Putin taunts Britain again," 'astutely' claiming that the Russian ships' presence may be connected to the deterioration in relations between Moscow and London in recent weeks. The Sun, meanwhile, wittily titled their piece "The Russians are Coming…Again," and described the Russian vessels as "Vladimir Putin's warships," in a naming convention that seems to have become standard among UK media in recent years.

#UK media again plays up lawful passage of #Russian #warships thru #English Channel as some sort of threat https://t.co/9XupQ1RptB pic.twitter.com/sCyUjFejvx

"Royal Navy heroes are tailing Russian warships as they steam toward the English Channel – for the THIRD time in just six months," The Sun's lead reads, sounding more appropriate for a wartime propaganda pamphlet than a boring story about some ships passing through international waters.

Willfully ignoring the Russian Defense Ministry's statements from earlier this month that the ships' mission, planned long in advance, was to head to the North Atlantic for anti-submarine warfare drills, The Mirror claimed that the Russian corvettes could really "be on their way to Syria."

The Daily Express was perhaps the most blunt, and most dishonest, in its approach, its headline to the story blurting: "Putin pushes British boundaries as WARSHIPS arrive in English Channel amid global tensions." The paper's tone seemed designed to give off the impression that the Russian leader had personally signed off on sending warships to the UK's coast just to rile up the Brits.

The Daily Star was similarly scary-sounding, its headline dramatically declaring that "Vladimir Putin's warships approach English Channel as Royal Navy ships scramble." Repeating The Sun's line about this being the 'third time in six months' that Russian ships were in the Channel, the newspaper replaced 'months' with 'years' for some reason, making the trumped-up event out to be even more of a non-story. As of this writing, the paper still hasn't corrected the obvious mistake.

© Sputnik / Website Dover-Marina.com
West 'Engulfed in Panic' Over Russian Naval Group Heading for Mediterranean
To Russian observers, the weekend's frenzy was reminiscent to the hysteria caused by the passage of the Admiral Kuznetsov aircraft carrier group through the Channel last October.

Back then, the same tabloids offered similarly ominous and over-the-top stories, writing endless nerve-racking reports on the Russians' 'provocative' move, commenting on potential interception plans by NATO, and citing retired naval officers' excited commentaries saying that the strike group's trip reminded them of the 'good old days' of Cold War-era tensions between East and West.