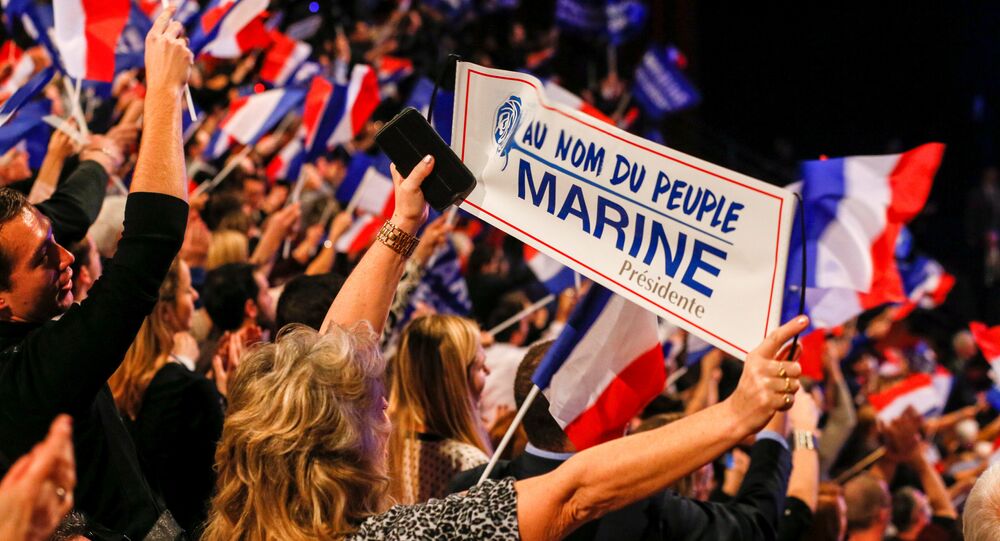 On Wednesday, Serge Portelli, a senior court of appeals judge in Versailles, warned that judicial officers will resign if National Front leader Marine Le Pen is elected president. The French ambassador to Japan, Thierry Dana, earlier said that he too would walk out if Le Pen is elected.

© REUTERS / Stephane Mahe
Le Pen Vows to Make 'Every Second' of Her Presidency Useful for France
In an interview with Sputnik France, Perrine Athon-Perez, a lawyer specializing in administrative and public litigations, said that court workers, state councilors and judges apparently fear that under President Le Pen the government would try to interfere in their daily work.

”Impartiality is the underlying principle of public service. Public servants, with the exception of a limited number of senior officials, should be immune to the political preferences of the government,” Perrine Athon-Perez said.

He added that for public servants, who refuse to work for a far-right government, resignation is the only way to go.

”Many of them could prefer to lose their social status and perks than to work for such an [ultra-right] government. However, their superiors could order them to stay put,” Athon-Perez noted.

“He says he is going to quit? Good riddance! We’ll send in a new envoy who knows how to speak Japanese,” Philippot said. She admitted however, that finding replacements for outgoing diplomats and judges could be a problem.

”This could disrupt the work of federal agencies; many [public servasnts] could go on strike, but I still don’t think that all of our judicial officers would resign at once,” she added.

© REUTERS / Patrick Kovarik/Pool
Macron, Le Pen Running Neck-And-Neck in 1st Round of French Presidential Elections
”If the National Front comes to power and someone wants to call it quits, so much the better. Elderly officials are usually the ones who resign. Those who have no respect for the people’s choice are no democrats. If undemocratic judges and undemocratic ambassadors choose to go, so much the better. We need people who want to serve their country, not an ideology,” he emphasized.