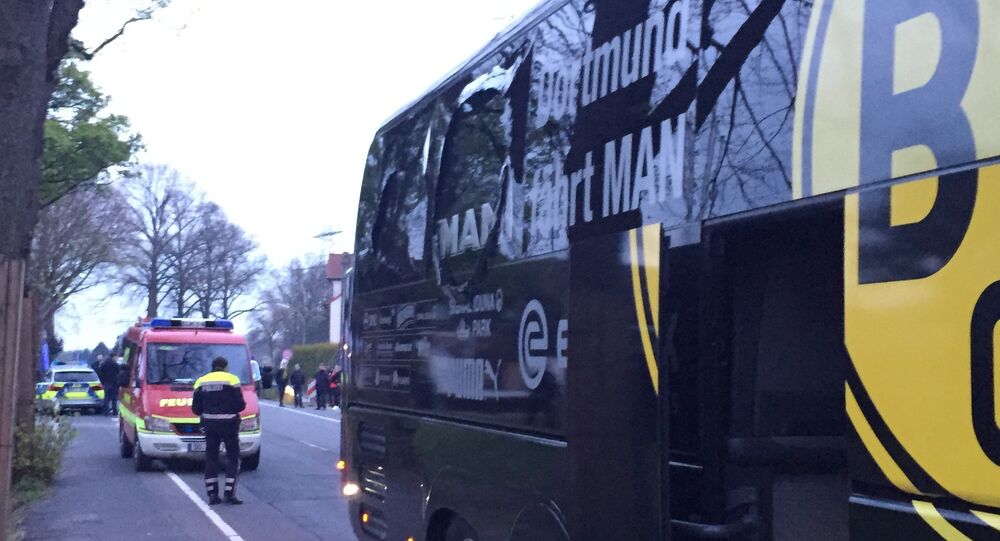 Germany's Prosecutor's Office said Thursday it issued an arrest warrant for an Iraqi citizen detained on suspicion of three explosions took place near the bus carrying players from the German football club Borussia Dortmund on Tuesday.

BERLIN (Sputnik) — On Tuesday, media reported that the far-left Antifa movement (Antifascistisk Aktion) allegedly claimed responsibility for the attack, but the Prosecutor General's Office stated that, according to the results of the initial investigation, the authenticity of the Antifa claim causes "serious doubts."

Earlier in the day, the police stated that according to the preliminary data the explosives could have been planted in the fence near the parking lot. The investigators also found three notes with the same text near the incident site, with the author claiming responsibility for the explosions and demanding to withdraw German Tornado jets from Syria, as well as to close down the US Ramstein Air Base in southwestern Germany.

"The defendant was detained yesterday in connection with the attack on the bus of the Borussia Dortmund football team. The investigation has not yet revealed evidence that the accused is involved in the attack," the office said.

It said 26-year-old Abdul Beset A. is "strongly suspected" of membership in the banned Daesh terrorist group in Iraq.

"The accused is suspected of joining the Islamic State [Daesh] at the latest by the end of 2014 in Iraq. According to the findings, he led the command of a unit of about 10 people," the office specified.