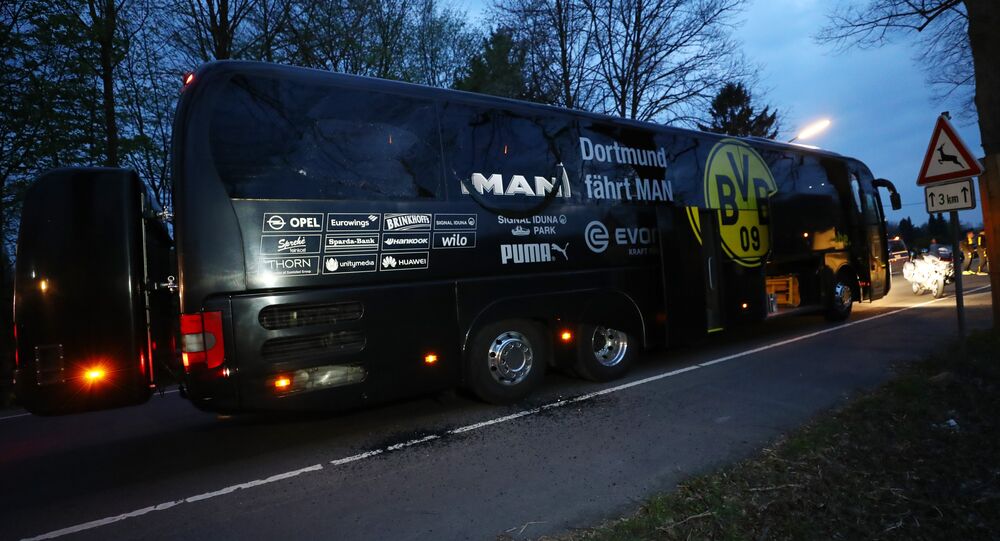 The spokeswooman of Germany's Prosecutor General's Office stated that a recent explosion in Dortmund is officially considered an act of terrorism.

"The circumstances of the crime allow us to talk about its terrorist background, so we took up the investigation," she said, adding that the explosive devices were stuffed with metal items and had the range of over 100 meters (328 feet).

The spokeswoman added that one of two suspects in the Borussia Dortmund football team bus explosion has been detained.

"Apartments of both suspects have been thoroughly searched, one of them was detained, we are currently checking the possibility to request his arrest," the spokeswoman said.

Three explosions took place on Tuesday near the bus carrying Borussia Dortmund players. The explosions occurred in the Hoechsten district of Dortmund, some 9.6 kilometers (six miles) away from the Signal Iduna Park stadium where the UEFA Champions League quarter-final game against Monaco FC was expected to take place. Borussia player Marc Bartra and a police officer escorting the bus were injured in what the police called a "targeted attack" against the team.

© AP Photo / Martin Meissner
German Police Find Note Near Scene of Dortmund Bus Attack
On Tuesday, media reported that the far-left Antifa movement (Antifascistisk Aktion) allegedly claimed responsibility for the attack, but the Prosecutor General's Office stated that, according to the results of the initial investigation, the authenticity of the Antifa claim causes "serious doubts."

Earlier in the day, the police stated that according to the preliminary data the explosives could have been planted in the fence near the parking lot. The investigators also found three notes with the same text near the incident site, with the author claiming responsibility for the explosions and demanding to withdraw German Tornado jets from Syria, as well as to close down the US Ramstein Air Base in southwestern Germany.

The football match between the Borussia Dortmund and Monaco FC, initially scheduled for Tuesday, has been moved to Wednesday.