Even though the Swedish Navy lost the bidding war over the privately-owned submarine port on the Baltic island of Gotland, the Armed Forces sighed with relief when the "strategic" port was sold to a Chinese entrepreneur. Not only was the port guaranteed exemption from any "Russian involvement," but the Navy was promised free access to the dock. 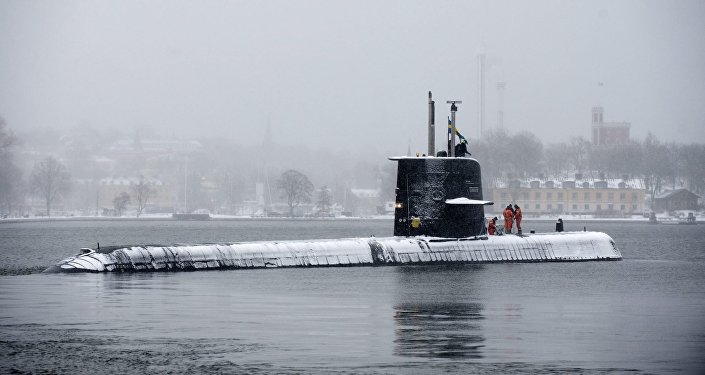 © AP Photo / Henrik Montgomery
Sweden Trying to Reclaim Former Submarine Port Amid Russian 'Threat'
Fårösund port became a bone of contention and repeatedly made national headlines after the Swedish Navy had second thoughts about the harbor it mistakenly privatized in the early 2000s. In the wake of the illusory Russian "threat," which the Swedish army's top brass has taken to promoting, Fårösund port, which features a submarine berth, was declared a strategic location. However, the Armed Forces' bid proved to be the lowest and it was soon out of the game.

When the current port owner, Joachim Kuylenstierna, proclaimed the Navy's bid insufficient, the outlook for the Navy seemed especially bleak, given that the Supreme Commander of the Swedish Armed Forces Micael Bydén declared that the country's Ministry of Defense would like to "ensure access to and control over the port."

The contested port, however, was sold to Artmax AB, which is wholly owned by Hong Kong Chinese Ming Wai Lau. For the Swedish Armed Forces, this news became a dream scenario, as Ming Wai Lau, who was described as a "wealthy Chinese" and a "friend of Sweden" had previously donated 400 million SEK ($44mln) to the Karolinska Institute and pledged to allow the Navy to freely use the facility.

"He has acquired the port, with its facilities, in order to let the Armed Forces use it. It is the only purpose he has. He is willing to let them take advantage of the dock free of charge," press officer Thomas Backteman said, as quoted by the Swedish daily Svenska Dagbladet.

© AP Photo / Henrik Montgomery
Sweden Trying to Reclaim Former Submarine Port Amid Russian 'Threat'
On top of that, the Artmax board also includes Fredrik Lundström, who has a background as an officer, and whose service career was related to Fårösund. According to Joachim Kuylenstierna, it was one of the reasons why the company was allowed to buy the port in the first place.

The purchase price has not yet been disclosed, yet Kuylenstierna previously hinted that he expected the price tag to be far higher than the 18 million SEK ($2mln) he himself had paid. Previously, Kuylenstierna made no effort to conceal that the Navy's modest bid of 20 million SEK ($2.2 mln) was the least attractive option, compared to other bids, which ran as high as 82 million SEK ($9.1 mln).

The Gotland port of Fårösund, which originated in a shipyard which was opened in 1938 to support the Coastal Artillery and the Navy, became of Sweden's most important harbors during the Cold War, owing to its strategic location in relative proximity to the Stockholm archipelago. The port's premises include around 25 facilities ranging from small sheds and garages to office buildings. Additionally, Fårösund port boasts a harbor basin measuring a full 7.25 meters in depth which is specifically adapted for submarines, which made it a valuable Navy asset.

In 2004, the port, which was estimated to have cost 500 million SEK ($55mln) to build, was sold to a private owner. Recently, the Swedish Fortifications Agency and the Armed Forces tried to recover the port after the Swedish island of Gotland (population 55,000) was identified as a possible entry point for a Russian "attack" on Sweden.