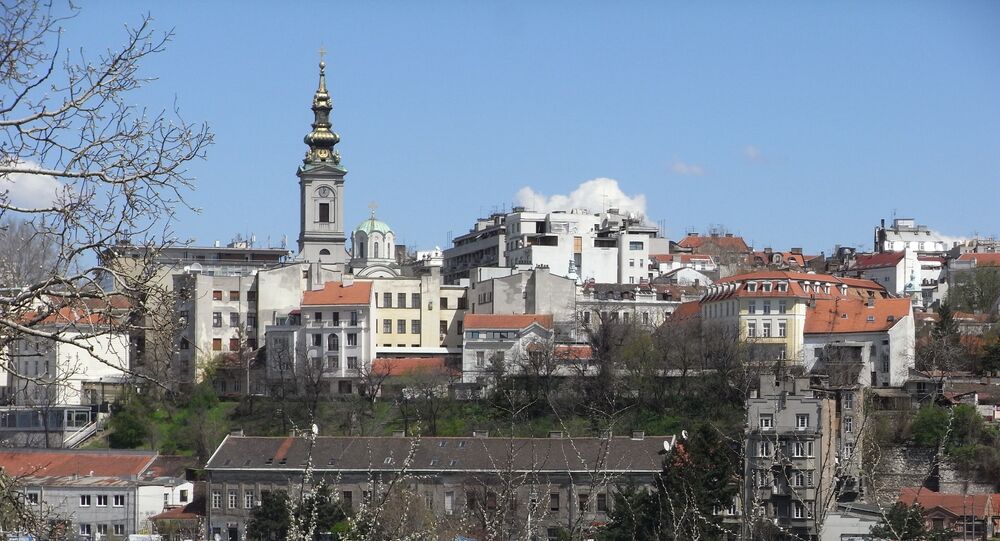 Following the initiative of Sputnik Serbia to erect a single universal monument commemorating all the victims of 1999 NATO aggression of Yugoslavia, more and more prominent politicians, scientists and well-known public officials are voicing their support of the idea. Here are just a few of them.

Almost two decades ago, back in 1999, NATO launched an aggressive bombing campaign on Yugoslavia. However until now, there has been no unifying memorial dedicated to all the victims of the 78 days when NATO bombs fell on Belgrade, then the capital of Yugoslavia and nowadays the capital and largest city of Serbia.

It would be wrong to say that the city does not remember the victims. There is a memorial to the victims of the bombing of the headquarters of Radio Television of Serbia (RTS), where 16 mostly-young people died, asking the simple question: "Zashto (Why)?"

© Photo : Novik A.N.
Memorial to the victims of the bombing of the headquarters of Radio Television of Serbia (RTS), where 16 mostly-young people died, asking the simple question: "Zashto (Why)?"

The country's leaders also lay a wreath every year at the monument to the members of the Army of Yugoslavia and patients of Belgrade’s “Dragiša Mišović” Clinic and Hospital killed in May 1999.

© Photo : Serbian Defense Ministry
Laying wreaths at the memorial to the victims killed in bombing of KBC "Dr Dragisa Misovic"

There is also a memorial tombstone to a three-year-old girl Milica Rakic, who was killed by a NATO shell fragment when she was getting ready to sleep.

"We were just children" reads the inscription on the tombstone.

© Photo : Novik A.N.
a memorial tombstone to a three-year-old girl Milica Rakic, who was killed by a NATO shell fragment when she was getting ready to sleep.

On June 12, 2000, the first anniversary of the end of the NATO bombing, the country's authorities unveiled the Eternal flame memorial (Večna vatra in Serbian) to the military and civilian victims. However the inscription on the monument contains quotes from the poems by Serbian poet Branko Miljković and a list of countries that bombed Yugoslavia.

There are also monuments in other Serbian cities however there is no unifying memorial with the names of all the victims of the NATO aggression. Besides, the exact number of those killed has not been officially released yet. The official data only says that the death toll stands at more than 2,000 people.

© Sputnik / Радоје Пантовић
Serbia Will Never Join NATO After Alliance's Aggression in 1999 - Serbian PM
After Sputnik Serbia came up with the initiative to erect a universal monument to commemorate all the victims of 1999 NATO aggression of Yugoslavia, more and more prominent politicians, scientists and well-known public officials are voicing their support of the idea. Here are just a few of them.

The idea has already been blessed by the Patriarch of the Serbian Orthodox Church Irinej.

On Sunday, Serbian Prime Minister Aleksandar Vučić told Sputnik that the government has every intention to erect a monument of this kind.

"Serbia will cherish all the commitments to the innocent victims of aggression on our country. It is our duty and an indication of our attitude towards our future. A disaster of this kind should never happen again," he said.

Earlier President of Serbia Tomislav Nikolić, President of the Republika Srpska, one of two constitutional and legal entities of Bosnia and Herzegovina, Milorad Dodik, Serbian filmmaker, actor and musician Emir Kusturica,  President of the Serbian Academy of Sciences and Arts Vladimir Kostic and Deputy Director of the Institute for the Protection of Cultural Monuments Ivana Prodanovic Rankovic also voiced their support for the idea.

© Photo : Facebook/ Студенти за истину
Yugoslavia Bombings' Victims May Be Painted on Russia-Donated MiG Fighters to Serbia as a Hint to NATO
"It is our duty to those who had been cruelly killed, to their families, to Serbia, against which this crime has been committed," said President of Serbia Tomislav Nikolić.

"The international aggression on Serbia, which by its intentions and enormity might well be labelled as terrorism, is a crime without punishment in that part of the world which calls itself civilized and which had united under the name of NATO," said Milorad Dodik, President of the Republika Srpska.

"However if there is no punishment, we should support the idea of a memorial in Belgrade, which would be a constant reminder of the innocent victims and of the cruelty and inhumanity of NATO," he added.

It should be a monumental piece of art, commensurate with the country's pain, he said. Which will remind the whole peace-loving world about the horrific and disgraceful deed which led to the deaths of mainly civilians and the destruction of villages, cities and infrastructure.

© Sputnik / Ruslan Krivobok
Sooner or Later, Serbia Will Have to Make a Choice: NATO or Russia
At the same time, the politician said, it should serve as a warning that such a deep wound can never be forgotten and should never be repeated.

Emir Kusturica meanwhile said that the monument should serve as a reminder that what happened to the Serbian people last century was a project aimed at their elimination. Aimed at turning the Serbian people from victims into criminals

"As people who have survived the most horrific sufferings in the last century, who were bombed by the allies four times during the Second World War with the 1999 bombing an Apogee of all that, we deserve a monument which will recall all these crimes against us. We deserve it for the sake of future civilizations and against the novel idea of bombing us to democracy," the filmmaker said.