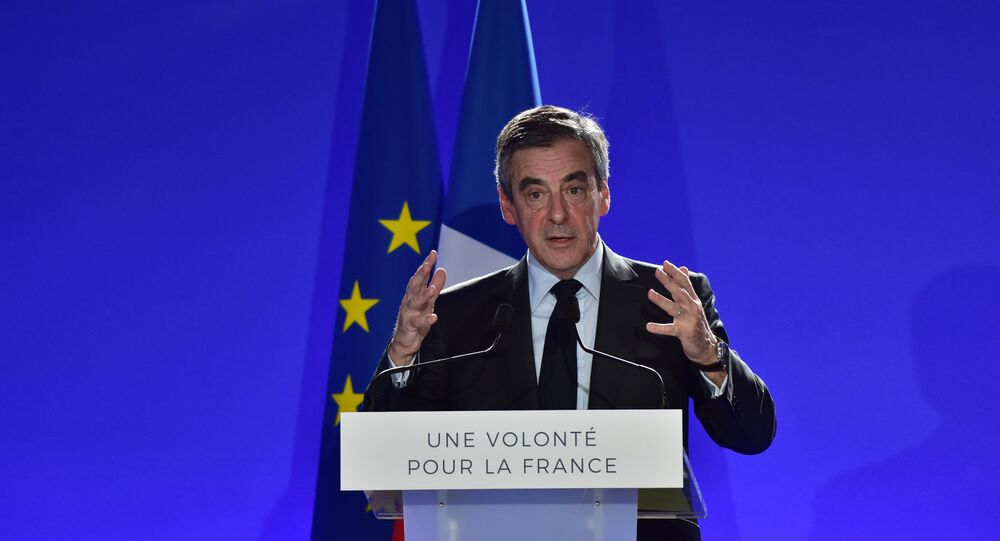 French The Republicans presidential hopeful Francois Fillon refused on Tuesday to comment on new media allegations about his wife Penelope Fillon's fictitious job, the so-called "Penelopegate" corruption scandal, stressing that he would never make statements on this issue again.

© AP Photo / Emilio Morenatti
Fillon Says Border Control Only Solution to Migration Crisis
MOSCOW (Sputnik) – On Monday, French Mediapart information website reported that Fillon had started paying his wife to be a member of the French National Assembly from 1982, rather than from 1986 as the candidate had initially claimed.

"I will not feed this soap opera of slander with its subsequent revelations, carefully distilled by the state services which now date back 36 years… Ten days before the elections: how far will we go?… I will never say a word on these issues again," Fillon told France 2 broadcaster when asked about the Mediapart revelations.

The Canard Enchaine weekly was the first to report that Fillon's wife allegedly did not work as a parliamentary assistant to her husband, a job she was nevertheless paid for. The ensuing scandal led to an investigation into the circumstances of Penelope Fillon's employment. Mediapart also chipped in with its own allegations of Fillon's misuse of public funds.

Fillon has repeatedly denied the allegations against himself and his wife.

The former prime minister was initially seen by the polls as likely to make it to the second round of the presidential elections, but the scandal around his wife's fake employment has seemingly hurt his chances.