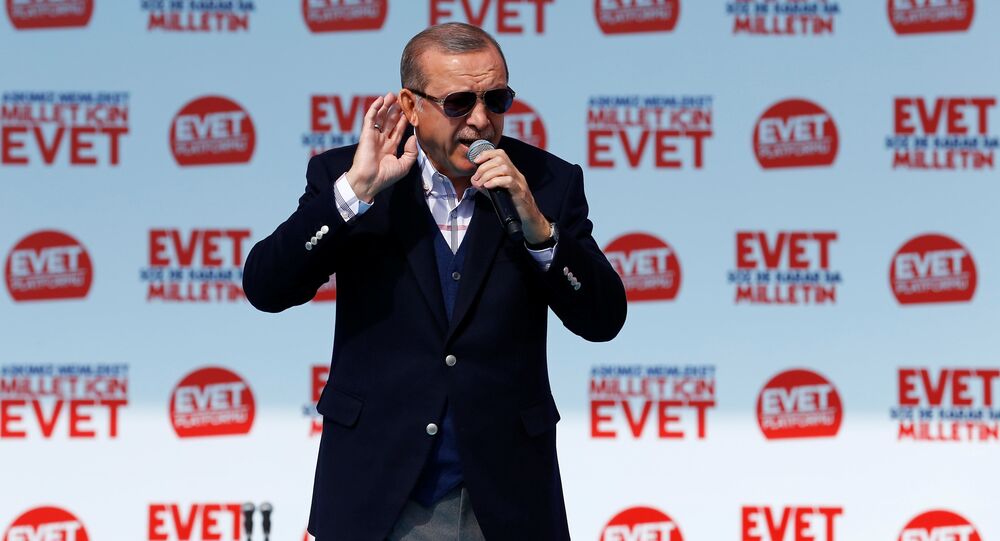 Turkish President Recep Tayyip Erdogan has launched a blistering attack on the EU, describing it as a "sick man," threatening to put the issue of Turkish membership of the bloc on the line, following the outcome of the controversial referendum of giving him extended presidential powers, April 16.

© REUTERS / Murad Sezer
Erdogan: 'Europe Will Answer for Their Treatment of Turks Following Referendum'
Erdogan has already stirred up a hornets' nest over the referendum, which — if the outcome is positive — will give him huge new powers, by calling a series of demonstrations among Turkish citizens in Germany, the Netherlands and Belgium.

"You have seen what happened in Europe. Why did they go crazy? Why did they go berserk? They saw what this system will bring to Turkey. Turkey is leaping, growing. This makes them go crazy.

"Europe will pay for what they have done. God willing, the question of the European Union will again be on the table after April 16. They said a century ago that we were the 'sick man.' Now they are the 'sick man.' Europe is collapsing," he told a rally April 9, referring to the fact that 19th century politicians described the Ottoman Empire as the "sick man."

Erdogan is holding a referendum, April 16 over controversial changes to the country's constitution — effectively handing him more power — with a new executive presidency replacing the office of the prime minister.

In an attempt to gain support for his plans from Turkish citizens living in Europe — with significant numbers in Germany, Belgium and the Netherlands — Erdogan has been using politicians — and his ministers — to promote them in rallies in both countries.

© REUTERS / Osman Orsal
People shout slogans during a protest in front of the Dutch Consulate in Istanbul, Turkey, March 12, 2017.

However, some rallies in Germany have been canceled by the authorities and the Dutch have also banned Turkey's Mevlut Cavusoglu from entering the country and preventing Turkish Family Minister Fatma Betul Sayan Kaya from attending a meeting in Rotterdam where she was due to meet representatives of the Turkish community.

© Flickr / BBC World Service
Moody's Lowers Turkey's Rating Outlook Due to Gov't Actions After Coup Attempt
The issue has made Turkish-EU relations even worse than they have been since the signing of the EU-Turkish migrant deal, which was intended to stem the flow of migrants crossing from Turkey into Europe.

The deal is supposed to allow for the return of migrants refused asylum — or not claiming it — in Greece to Turkey. But this was contingent on accelerating Turkish accession into the EU. However, it has already stumbled over human rights issues and a clampdown by Erdogan on the opposition and the media — especially following the attempted coup, July 2016.

Former Belgian Prime Minister and leader of the Liberals and Democrats (ALDE) Guy Verhofstadt has now called on the European Council and the Commission to freeze the accession negotiations with Turkey — especially after Erdogan accused Germany of Nazi tactics in banning rallies and accusing the Dutch Government of being fascist.

What's the least a journalist can do for imprisioned colleagues in #Turkey? RT our call to #FreeTurkeyMedia or even do a selfie. #wpfd2017 pic.twitter.com/fBr3dBaPms

​"It is very cynical that Erdogan calls the Netherlands 'fascist,' while at the same time he turns Turkey into an autocratic state. He asks for freedom of speech in Europe for his Ministers, but at the same time he is jailing critical journalists. Europe must unite and put pressure on Erdogan to free the German journalist Deniz Yucel immediately. Instead of more declarations, we must freeze the accession negotiations with Turkey now," Verhofstadt said.

Erdogan: 'Europe Will Answer for Their Treatment of Turks Following Referendum'

Erdogan's Self-Branding as 'Guardian of Peace' Raises Many Eyebrows