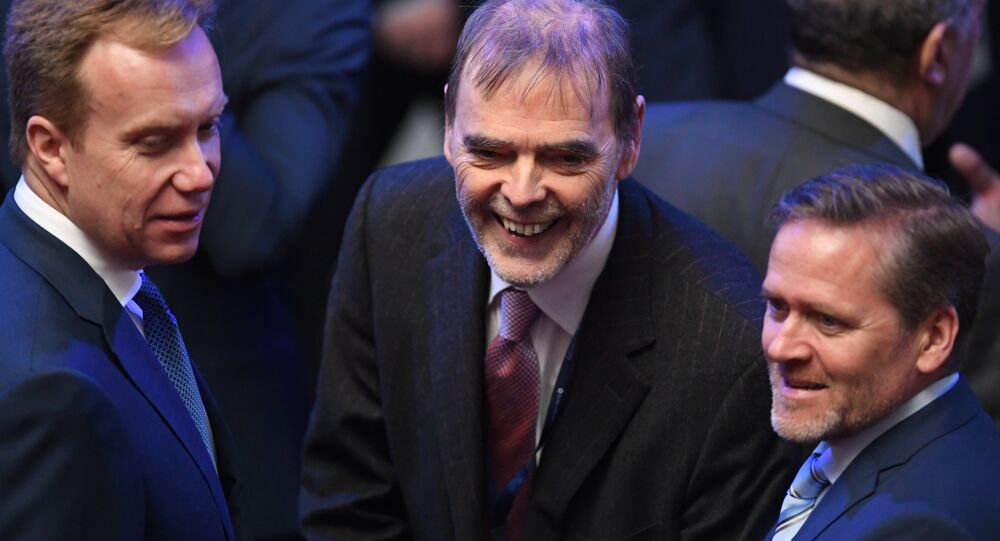 While Norwegian-Russian relations have been put on the back burner in recent years following the overall cooling of Moscow's ties with the West, Norwegian politicians and Russian experts have been repeatedly calling for a re-invigoration of bilateral relations, particularly between business communities.

© AFP 2020 / JONATHAN NACKSTRAND
Norway Admits It 'Ping-Ponged' Refugees to Test Russia
Recently, Norwegian Foreign Minister Børge Brende visited an Arctic forum in Arkhangelsk, Russia. This is the first time a high-ranking Norwegian politician had stepped on Russian soil since 2014, when Norway, in line with many other Western states, condemned Crimea's re-unification with Russia as an "occupation." To extend a cooperative hand to the Russians right after what was perceived as the "annexation" of Crimea would have been absolutely unthinkable for the Norwegian government.

"We should have been in Russia in 2014," Sør-Varanger Municipality Mayor Rune Rafalesen, who believes that the Ice Age between the Norwegian and Russian political establishments has lasted too long, told the Norwegian daily Dagbladet. "We predict dialogue internationally. Why shouldn't it apply to ourselves then? Now, three years later, everyone admits that dialogue is correct," he continued.

A Labor Party member, former leader of the Barents Secretariat and mayor of the border municipality, Rune Rafaelsen has been one of the most outspoken proponents of closer cooperation with Russia. Not only because his municipality shares a border with Russia, but because he believes that it would only do Norway good economically and security-wise.

"The world should be damn glad that there are so few Norwegians," Rune Rafaelsen was quoted as saying.

© Flickr / Utenriksdepartementet UD
Unnerved Norwegians Ask Gov't to 'Do Something' About Anti-Russian Sanctions
While the political climate between the two nations has reached a freezing point, the lion's share of the cooperation has persisted, especially at the personal level.

"I see no obvious holes in the Norwegian-Russian cooperation portfolio, but there is plenty of room for further development, particularly within the business community," Lars Rowe, senior researcher and expert on Russia at the Fridtjof Nansen Institute (FNI) told Dagbladet.

The Western sanctions against Moscow proved particularly detrimental for the Norwegian presence in Russia. The Russian economy has an urgent need of foreign investment, with giant revenues to offer in reward, Rowe pointed out.

Even if tiny Norway is in many aspects dwarfed by vast Russia, the countries are also mutually dependent on each other when it comes to the extraction of energy resources in the Arctic.

"Russia needs investments to get started, partners who can share risks and, last but not least,technology to implement its plans" Lars Rowe pointed out, suggesting that there was no reason to doubt that the future development of the Arctic seabed would be highly relevant for Western oil companies.

© AFP 2020 / Nicholas Kamm
Norway Secretly Wants Trump to Set Example, Rescind Sanctions Against Russia
According to Mayor Rune Rafaelsen, Norway should continue its cooperation with Russia in the Barents Sea, and the broader and more complex, the better.

"What could possibly be more important for the Norwegian security policy? If we don't step in, someone else will do it, and it's only natural that neighboring countries are the first to join," Rune Rafaelsen told Dagbladet.

Yet another potential sphere of cooperation is the further development of the already existing environmental cooperation between Norway and Russia, researcher Jakub Godzimirski of the Norwegian Institute of International Affairs (NUPI), told Dagbladet, arguing that Norway and Russia are facing the same challenges in the north.