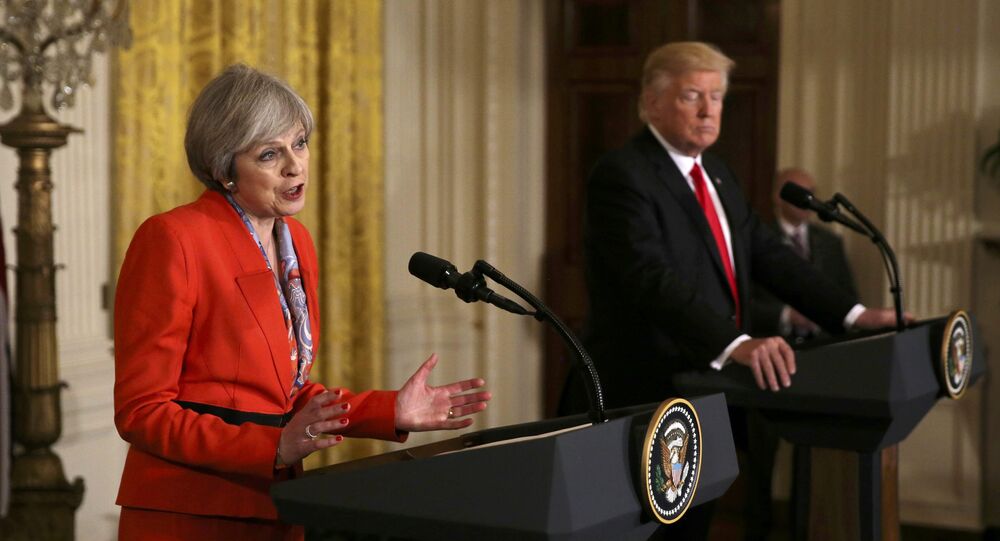 The UK's decision to back the unilateral US military bombing of Syria has been denounced as an act of war. Dr. Hans Kochler, the President of International Progress Organization - a Vienna based group affiliated with the UN - told Sputnik that the US attack is illegal, and indicative of a "double standards" foreign policy adopted by Western powers.

UK Defense Secretary Sir Michael Fallon has rebuffed accusations that the UK is throwing it's support behind an illegal act by US President Donald Trump.

On Thursday, April 6, fifty-nine Tomahawk cruise missiles were fired from two US Navy ships in the Mediterranean. Six people were killed, according to the Syrian army.

The assault came days 72 people died in a suspected sarin gas attack on the rebel-held town of Khan Sheikhoun in north-western Syria.

"Our reaction is we fully support what the Americans have done," Sir Michael told BBC Radio 4's Today Program.

"It's limited, it's wholly appropriate, it targeted the airfield… the equipment the Americans believe was used in this gas attack and is designed to deter the regime from planning similar gas attacks."

When pressed that this unilateral attack could amount to a declaration of war, Sir Michael defended the Trump administration.

"No, it hasn't declared war. The Americans have made it very clear that the attack last night was limited, it was narrowly focused.

"They did everything possible to minimize civilian casualties indeed to avoid Russian personnel on that particular airfield."

UK Defence Sec Michael Fallon says "without intervention more blood would have been spilled". This strike will NOT prevent that #Syria

Dr. Hans Kochler, President of the International Progress Organization — a Vienna-based think tank dealing with world affairs,that has consultative status with the Economic and Social Council of the United Nations, told Sputnik that the UK government's stance is to be expected.

"I am not surprised because this is the policy of double standards, these two and other allied countries, have been practicing all along for several decades, particularly since the end of the Cold War.

"They [the UK] have quite often sided with the US in military attacks, also, for instance not to forget against former Yugoslavia, and they have been calling for the respect of international law only when it serves their interests," Dr. Kochler told Sputnik.

According to Dr. Kochler, President Trump's intervention is undoubtedly illegal under international law.

"This was not the case and for that reason, the attack was obviously illegal."

The US military attack came in the midst of the UK and France trying to renew efforts to broker a diplomatic solution to the six year long Syrian civil war.

Despite the marked deviation in foreign policy that backing President Trump has necessitated, Dr. Kochler believes the UK will continue to publicly back the US.

"As far as the UK is concerned, I think they will just go along with their strategic partner the US, and we have seen similar declarations not only from the UK by the way but also Australia and from NATO countries such as Denmark, and even Germany, earlier today [April 7]."

The UK's swift backing of the Trump bombardment has been widely criticized by anti-war campaigners, and by the leader of the opposition Jeremy Corbyn, who derided the US' actions as risking "escalating the war in Syria still further."

The Stop the War Coalition is holding an emergency No to Trump's attack on Syria protest outside Downing St. in central London on Friday (April 7) evening.

How the Media Transformed 'Committed Jihadist' to Humanitarian Rescuer