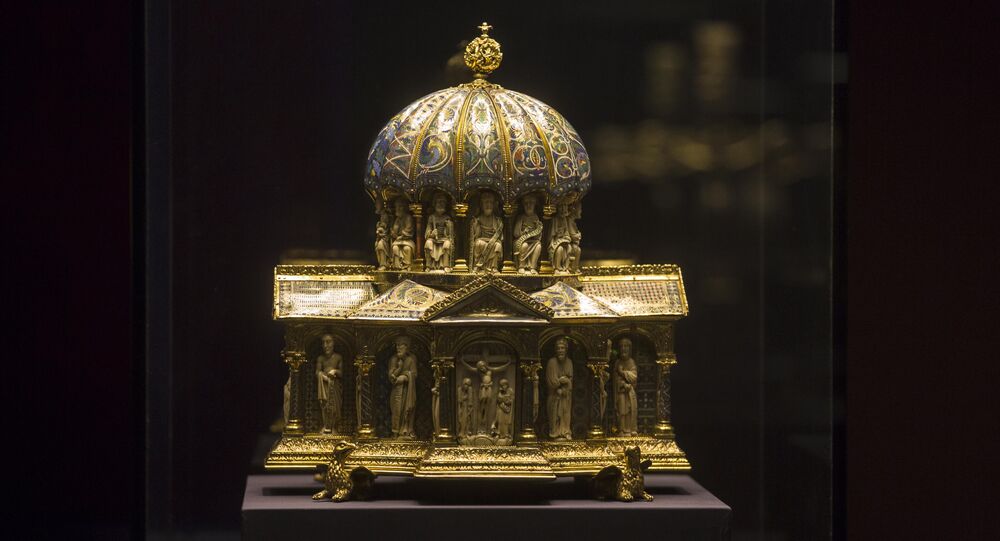 A trio of men, the descendants of German-Jewish art dealers, have spent nine years embroiled in a battle with the German government over the rightful ownership of a collection of church relics their forbears sold to the Nazis.

They have filed a lawsuit against Germany in an American court, which ruled that the treasures were sold under duress to the Nazi government in 1935.

​US District Judge Colleen Kollar-Kotelly in Washington, DC, upheld the heirs' argument that the 1935 sale was a "part of the genocide of the Jewish people during the Holocaust and, accordingly, violated international law."

"We are pleased that the court agreed that a forced sale for an inadequate sum to agents of [Nazi official] Hermann Göring enjoys no immunity from justice," Nicholas O'Donnell, the attorney representing the heirs, said in a statement.

"The facts show beyond all doubt that the 1935 'sale' was nothing more than a sham transaction that was part of the regime of institutional oppression of our clients' ancestors by Nazis at the very highest level."

The 82-piece collection consists of golden crosses and silverwork that once belonged to Prussian nobility dating back to the 11th century. It is valued at $227 million. Jed Leiber, Gerald Stiebel and Alan Philipp claim that their relatives were coerced into selling the relics for a fraction of their value in Nazi Germany. Adjusted for inflation, the dealers took an estimated $176-million loss on the sale.

The dealers purchased the so-called Guelph Treasure in 1929 from Ernest Augustus, the deposed Duke of Brunswick. They sold half of the treasure to museums and collectors before selling the rest to the German state of Prussia. Two of the art dealers fled Germany following the sale. The third died in the Holocaust, but was survived by his children.

In 1935, Prussia's governor was Hermann Göring, a Nazi who founded the Gestapo, commanded Germany's military and was fast becoming Hitler's right hand man. Göring was a noted collector of artwork and relics, amassing a collection valued at $200 million by biographer Roger Manvell. Most of his collection was seized from Jews who had their property repossessed by the Nazi government.

Court documents claim that Göring presented the Guelph Treasure as a gift to Hitler. The pieces were displayed in the Bode Museum in Berlin, still owned by the German government.

In 2008, Leider, Stiebel and Philipp filed a case for restitution for the treasure to be returned to them. German officials argue that the low price at which it was sold was due to the Great Depression collapsing Germany's art market.

In 2014, Germany's Limbach Commission, which was set up to review restitution cases, ruled that the sale was not a forced sale due to Nazi persecution. In response, the three heirs sued Germany in an American court.

While foreign states are typically exempt from lawsuits brought against them in American court under the 1976 Foreign Sovereign Immunities Act, the law makes an exception for property seized in violation of international law. This is the first time Germany has had to defend itself in an American court regarding alleged Nazi art seizures.

Experts say the decision could encourage the descendants of others who suffered during the Holocaust to pursue legal action against Germany.

"It opens all kinds of other claims based on forced sales in Nazi Germany to jurisdiction in US courts if the facts support it," said O'Donnell.

Jonathan Petropoulos, a Claremont McKenna College history professor who specializes in Nazi art restitution, concurred. "The German system for civil litigation presents so many obstacles to claimants," he said. "Victims and heirs deserve their day in court in front of an impartial judge."

The German government may appeal the ruling if they like, a possibility that attorney Jonathan Freiman didn't rule out. "This is a dispute that was already resolved on the merits in Germany, and it doesn't belong in a US court," Freiman said. If the German government chooses not to take any further action, the items will have to be returned to the dealers' families.

The Limbach Commission was created in 2003 to consider still-contested restitution cases regarding artwork and other property seized by the Nazis in the 1930s and 40s. However, it has been criticized for its sluggishness.