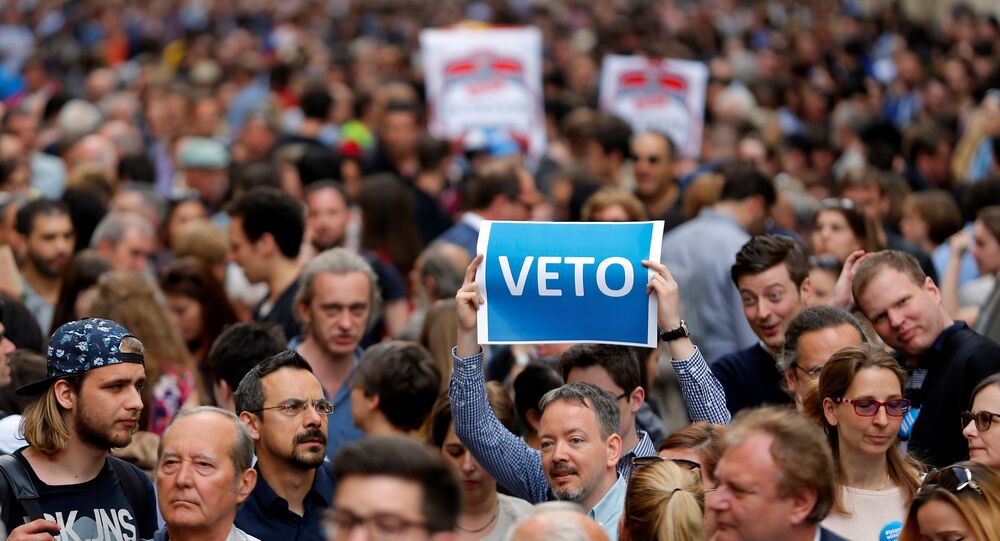 Thousands of people formed a human chain around the Central European University (CEU) in Budapest after the Hungarian parliament passed legislation that could effectively shut down the institution, which was founded by Hungarian-born billionaire George Soros.

The Hungarian Parliament, April 4, passed a motion effectively preventing the Soros-backed CEU from operating as an educational institution in the country. Hungary's governing Fidesz-KDNP coalition — led by Prime Minister Viktor Orban — took just a week to enact the law, which has been condemned worldwide by academics, students and politicians.

​Soros has been a strong critic of Orban and those protesting against the new law said the Hungarian prime minister was using his political weight to stamp out opposition supporters and undermine free speech.

"CEU needs to abide by laws; they don't have to negotiate with us, though maybe they would like to do so, but they are not the American government yet," he said, according to Hungarian online news portal index.hu.

"Several institutions are acting unlawfully when they issue foreign university degrees here in Hungary while not conducting teaching in their country of origin, as prescribed by Hungarian regulations… The government will be making the Hungarian regulations stricter to include the fact that universities from outside the EU can only hold courses and issue degrees in Hungary on the basis of an international treaty," a government statement said.

However, the university responded, in an email to staff and students, that the law was specifically being used to target the CEU and was "unacceptable."

"After careful legal study, CEU has concluded that these amendments would make it impossible for the University to continue its operations as an institution of higher education in Budapest, CEU's home for 25 years. CEU is in full conformity with Hungarian law. The proposed legislation targets CEU directly and is therefore discriminatory and unacceptable," the email stated.

Daniel Penev, a Bulgarian journalist and a member of the Association of European Journalists, said the move was a sign of "Orbanocracy."

"This consolidation of power, reminiscent of current and past authoritarian regimes, has been possible partly due to the EU's hesitant response. Even though they have expressed concern over recent developments in Hungary, EU leaders have mostly stayed by the side, watching the emergence of a political system that is certainly illiberal and largely undemocratic — all this in an EU Member State that probably wouldn't be allowed in, were it to apply for membership today," Penev wrote in an opinion column for Euractiv.