As Germany gears up for a federal election in September, many political voices - including those within Angela Merkel's Christian Democratic Union (CDU) - are taking an increasingly tough stance on immigration in general and Islam in particular, with some lawmakers calling for laws to regulate the religion.

Among the most prominent voices was Jens Spahn, a member of the executive committee of the CDU, who said in March authorities "had to know" what happened in mosques, and sermons should be given in German as a result.

"Is it enough, just to ask that they don't break the law? Should they not encourage cooperation and integration?" he asked local media.

Moreover, Spahn called for a ban on foreign funding for mosques and Muslim organizations, and demanded mosques be registered, saying authorities did not know how many mosques there were in the country, where they were, or who finances them.

© AFP 2019 / SHAH MARAI
Merkel Urges to Ban Burka 'Wherever Legally Possible'
Germany currently collects money from members of Christian churches in the form of a so-called Church Tax, the proceeds of which are passed on to religious authorities in Germany. However, this levy is controversial, with suggestions some formally quit the church to avoid paying it.

Spahn's proposals were supported by CDU deputy head Julia Kloeckner, and Merkel herself largely echoed their sentiments in her weekly podcast April 1, saying refugees living in Germany must respect the values of tolerance, openness and freedom of religion. The Chancellor has shown a willingness to employ anti-Islam rhetoric for electoral purposes, saying in December she was mulling the implementation of a veil ban.

However, Merkel's spokesman Steffen Seibert dismissed the idea two days later, saying such a law "is not an issue for government business."

Seibert also emphasized the value placed on religious freedom in Germany by the ruling coalition, stressing it was one of "the central freedoms promised by our constitution." Ruprecht Polenz, former secretary-general of the CDU, slammed Spahn's suggestions as "populist crackpot" ideas.

Spahn's efforts represent the latest attempt by right wing elements of the CDU to sway Merkel, and the wider party, to a more conservative agenda, and assuage concerns among the party's base. For much of the Chancellor's third term, re-election seemed all but assured, but her support suffered a dip in the wake of her "open door" migrant policy, which saw almost a million mostly Muslim migrants enter Germany in 2015.

The far-right Alternative for Germany (AfD) was the initial beneficiary of the slump, but its ratings have tanked considerably over the course of 2017.

Now, polls indicate the Social Democratic Party (SDP), led by the popular Martin Schulz, is neck and neck with the CDU.

While the increasingly harsh tone on Islam is avowedly an electioneering tactic, there are suggestions Islamic extremism is on the rise in Germany. 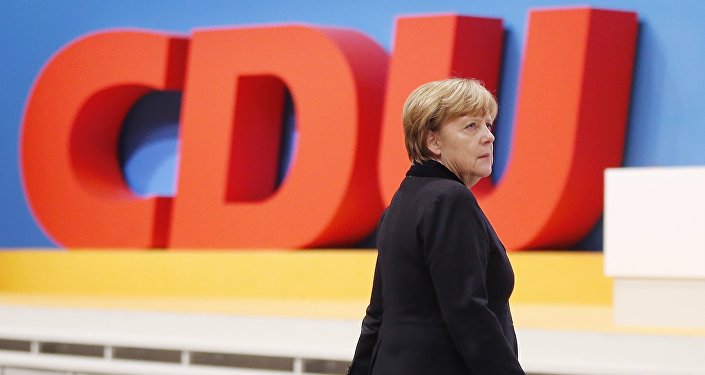 On April 2, Germany's Federal Office for the Protection of the Constitution warned of an alarming rise in the popularity of Salafism, the fundamentalist form of Sunni Islam which condemns theological innovation, advocates strict adherence to Sharia law and demands the institution of a theocratic Islamic state. Intelligence services are said to have identified at least 10,000 adherents of the movement in the country, a figure which has more than doubled over the past decade.

In May 2016, it was revealed a 24-year-old Islamic extremist who was "active on the Salafist scene" was allowed to work in the high-security areas of Berlin's two airports for years.

Estimates indicate Germany's Muslim population stands at around six million as of December 31, 2016, 7.5 percent of the country's population overall.

Merkel’s Conservatives Catch Up to Socialists in Opinion Poll