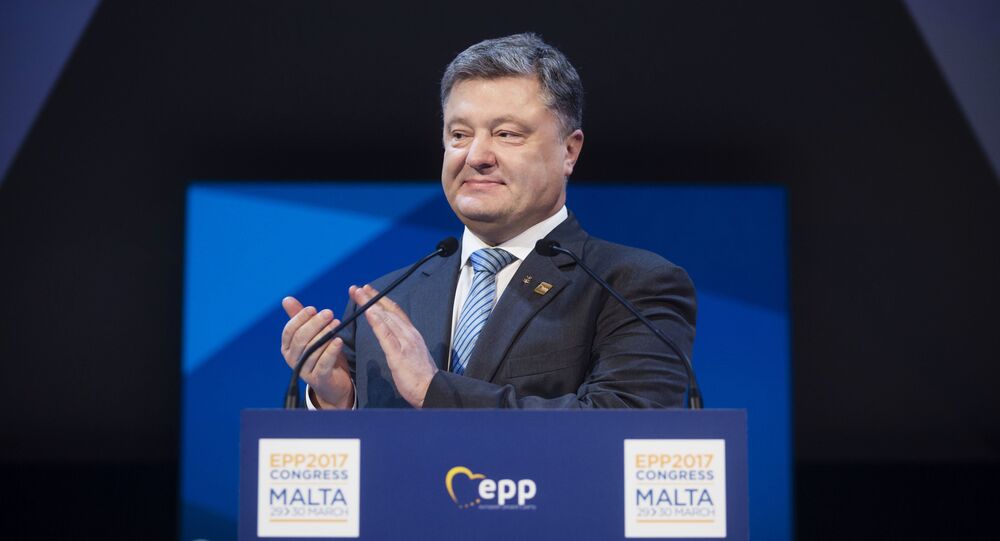 Kiev Comes Up With Ingenious Plan to Save Economy: Ask West for More Money

Ukrainian President Petro Poroshenko has asked the EU to create an economic assistance program for Kiev similar to the Marshall Plan, the US initiative which helped Western Europe rebuild after World War II. However, observers say Ukrainians shouldn't get their hopes up about any major economic assistance coming from Brussels any time soon.

Ukraine's president attended the summit personally to push the pan-European party to take steps to create this 'Marshall Plan for Ukraine'.

© AP Photo / Mindaugas Kulbis
Gimme, Gimme More! Poroshenko Hopes EU to Adopt ‘Marshall Plan’ on Extra Financial Aid to Ukraine
"Wonderful news from Malta on the results of my visit to the Congress of the European People's Party," Petro Poroshenko jubilantly wrote on his Facebook page Friday evening. "My thanks to the EPP family for the very important resolution on the initiative of our Lithuanian partners to develop a long-term plan to support Ukraine, a so-called 'Marshall Plan for Ukraine,'" he added.

According to the president, the passing of the resolution was "proof of the determination of Europe's most influential political force" to support Ukraine and its aspirations for European integration.

"I look forward to the further steps of the European partners in implementing the idea of creating a 'Marshall Plan for Ukraine', and will be ready to discuss this issue during the next contacts with the leaders of the EU institutions and member states," Poroshenko remarked.

The resolution explained that "in order to keep motivation of Ukrainian people" at sufficient levels to implement the necessary "difficult reforms," Brussels should establish "a broad investment package ('Marshall Plan for Ukraine') aimed at boosting Ukrainian economic recovery." The package, the document stated, would be "conditional on achievements and concrete policy decisions made by [the] Ukrainian government."

Observers say that the term 'conditional' is the key, and what Poroshenko should have focused on, rather than the promised riches of billions of euros in EU assistance. They noted that IMF's credit program was a perfect example of just how difficult it's been for Kiev to actually receive even moderate assistance, and the kinds of painful concessions it's been forced to make to get even those funds.

The third tranche of the IMF's loan package was held up for nearly half a year, pending painful and politically risky reforms in the social spheres. Last month, the provision of the fourth tranche of $1 billion was also postponed. Ukrainian officials have indicated that they expect to get the loan later this week, although the expected concessions remain unknown. According to Ukrainian media, they may include the requirement to raise the retirement age, reduce social benefits, further increase utilities prices and lift the moratorium on the sale of agricultural land.

© Sputnik / Stringer
IMF Meeting on Ukraine Financial Aid Planned For April 3 - Source
Russian political and economic analysts say that Kiev has few real reasons to get its hopes up about any large-scale injections of European aid in the form of a new Marshall Plan. In fact, according to political scientist Alexander Shatilov, both Europe and the US have enough problems of their own to deal with.

"One can understand Poroshenko," the observer said. "The economic situation in his country is awful, and all that's left for him to do is conjure up images of a bright future for Ukrainians. Earlier, this was the image of Ukraine's European integration. Now, it's clear that European integration isn't working out, and so it's necessary to look for some alternative slogans so that the country's citizens do not get out of control."

"That's why Poroshenko jumped on the idea of a Marshall Plan 2.0 with such joy…It's worth recalling that this topic has been discussed for a long time, almost as long as the idea of Ukraine's European integration, its entry into NATO, and financial support from international organizations."

In reality, Shatilov noted, "we see that even the IMF, which previously approved a [$17.5 billion] credit line for Kiev, is constantly postponing the provision of new tranches. Now it's no longer about tens of billions, but about minimal sums, and the IMF is not in any hurry to give even these, seeing Kiev as an insolvent debtor."

Furthermore, the analyst recalled that Europe already has enough problems and concerns of its own to deal with, and is unlikely to take billions in tax money from its own citizens to "throw it out the window" in the form of aid to Ukraine. "This is especially true given the high levels of corruption among Ukrainian officials who, without any hesitation, will squander all the Western grants for personal purposes," Shatilov stressed.

© AP Photo / Sergei Chuzavkov
Russia's Largest Bank Leaves Ukraine, 'Country With Zero Investment Reliability'
Poroshenko, according to the analyst, is "grasping at straws," facing a very difficult political situation, where he is forced to balance between opposition politicians, public discontent and disaffected radicals. "He finds himself having to maneuver, and to show maximum flexibility, to search for non-standard moves, trying to maintain a level of optimism and thus to prevent a complete collapse of the system. This, I think, is the reason behind the president's cheerful [Facebook] posts."

As for the EPP resolution, Shatilov noted that for now, it remains little more than a declarative document, with Brussels unlikely to approve such colossal and risk-laden spending.

"As for the US, practice has shown that that the new president will pursue a fairly tight [fiscal] policy, and does not plan on making heavy investments in dubious projects. Washington is bargaining with Germany even regarding the financing of NATO. With this kind of approach, they're even less likely to throw serious money at Ukraine," the observer said.

Still, Shatilov emphasized that opponents of Ukraine's present coup-installed government shouldn't get their hopes up about any possible end of the current government. "The West will continue to give Kiev the minimum amounts of money necessary" to prevent total collapse, he said. "Ukraine is perceived as a kind of 'anti-Russia' – a tip on the Western spear directed against our country."