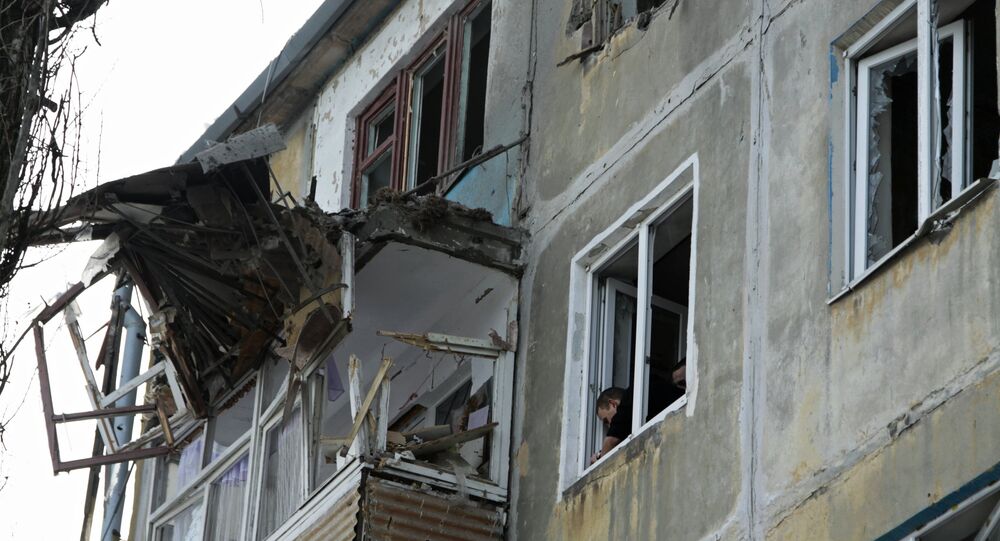 The Trilateral Contact Group on Ukrainian reconciliation coordinated on Wednesday a new ceasefire along the separation line in Donbass for the duration of the Easter holidays starting on April 1.

© Sputnik / Mikhail Voskresenskiy
Over 20 People Killed, Nearly 100 Injured in Donbass Since Start of 2017 - OSCE
"The good news is, definitely, today's statement by the Contact group, which reiterates the absence of alternatives to the Minsk peace accords, and stipulates the agreement by all sides to respect full cessation of hostilities starting midnight April 1 in light of Easter holidays," Russian envoy to the Contact Group Boris Gryzlov said.

The conflict in the eastern Ukrainian region of Donbass erupted in 2014, as a popular reaction to the Maidan coup in Kiev that toppled President Viktor Yanukovych. Residents of the Donetsk and Lugansk regions held independence referendums and the so-called Donetsk and Lugansk People’s Republics were proclaimed. Kiev has since been conducting a military operation in the region, encountering stiff local resistance.

In an interview with Radio Sputnik Bogdan Bezpalko, a political analyst and a member of the Russian Presidential Council for International Relations, doubted that Kiev would adhere to the recently achieved agreements.

"The developments of the last three years prove that the Ukrainian government makes agreements but doesn’t observe them. Recently, Kiev has not even tried to show commitment to the Minsk agreements. Of course, I welcome the negotiating process, but I’m not sure that the agreements will be observed by Kiev," Bezpalko said.

© Photo : YouTube/Golos UA
Economic Blockade of Donbass to Cost Ukraine 1% of GDP - Ukrainian Prime Minster
The expert also said that it could not be ruled out that Kiev would resume shelling in Donbass after it received a new tranche of financial aid from the International Monetary Fund (IMF).

On Thursday, Ukrainian Finance Minister Oleksandr Danilyuk said that the IMF would review the disbursement of a $1 billion loan to Ukraine on April 3.

Earlier this month, the IMF Executive Board postponed a planned meeting which expected to review the loan. The Ukrainian Finance Ministry said that the reason behind the delay was due to the need to re-evaluate the economic consequences of a cargo blockade imposed by Kiev against the self-proclaimed Donbass republics.

"If Ukraine receives new tranches, for example from the IMF or World Bank, it is likely that Kiev will resume military actions and everything will happen again, including the blockade and shelling," Bezpalko said.

© AFP 2020 / THOMAS KIENZLE
Why Ukraine Has Reasons to Be Concerned Over IMF Tranche Delay
He added that the United States could pressure Kiev on the implementation of the peace agreements but this is unlikely because Ukraine is not among the priorities on the Washington’s current agenda.

"If [US President] Donald Trump set conditions for the implementation of the agreements during his planned meeting with [Ukrainian President Petro] Poroshenko, this would surely have an effect. But the fact is that Washington has distanced itself from the Ukrainian problem and Trump is unlikely to pressure Poroshenko," the analyst concluded.

The IMF approved a four-year $17.5-billion loan program in exchange for reforms in Ukraine in March 2015. The aid package to be paid out in installments is open for review on a quarterly basis. Kiev has already received $7.7 billion in aid, with the last tranche unveiled in September 2016. In 2017, Ukraine expects to receive from the IMG another $5.4 billion.

© Sputnik / STR
IMF to Review Next $1 Bln Loan Disbursal to Ukraine on Monday - Finance Minister
Stanislav Byshok, a political analyst at CIS-EMO international non-governmental organizations, said that the domestic situation in Ukraine may undermine the disbursement of the new IMF tranche.

"On the one hand, Kiev has been implementing its obligations [to the IMF] to reduce social spending. But there are still problems with corruption and financial transparency. On the other hand, the conditions for the loan are very strict. First of all, they are bad for the poor Ukrainians," Byshok told Radio Sputnik.

Echoing Bezpalko, Byshok also argued that now the US is not that interested in the Ukrainian problem and Washington is unlikely to pressure the IMF on the loan for Kiev.

"The US plays a key role in the IMF. I think that some aid is possible. But the problem is that the new US presidential administration has less interest in Ukraine than during Barack Obama’s presidency. In Washington, there are no lobbyists of financial aid for Kiev," he pointed out.