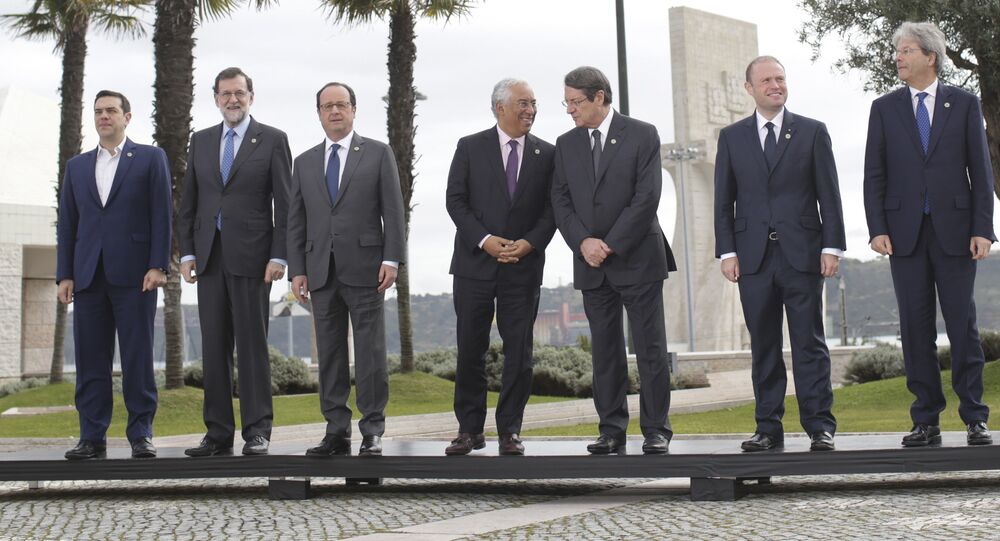 Spain is to host a gathering of Southern European Union countries to discuss Britain and EU's negotiations on leaving the bloc, it has been announced.

Spanish Prime Minister Mariano Rajoy and the leaders of Cyprus, France, Greece, Italy, Malta and Portugal, will gather April 10 at the El Pardo palace outside Madrid, with the main goal being "to discuss all the work being carried out" to ensure "good Brexit negotiations," a statement said.

The will be the group's third meeting — sometimes derisively dubbed "Club Med" — since last September, following gatherings in Athens and Lisbon.

In the wake of the latter, Greek Cypriot President Nicos Anastasiades called for the adoption of measures to battle unemployment and attract investments to the region in order to prevent the growth of euroskepticism.

© AFP 2020 / JOHN THYS
"We have to restore dignity. Currently, populists and radicalization are on the rise. The best way to deal with it is by undertaking concrete measures to battle unemployment, create the basis for investment growth, security and development of Europe that we deserved and that we have dreamed of," Anastasiades said.

The group includes some of the countries hardest hit by the financial crisis.

Greece was the most savagely affected, and continues to suffer from bailout liabilities and austerity economics imposed by Brussels.

Portugal likewise, required an international bailout worth tens of billions of euros, and similarly faced demands for "tough" economic reforms.

Southern European leaders have previously sought to use meetings to forge a common front on growing challenges, including the refugee crisis and influence of Northern Europe within the EU.

In a timely twist, the announcement of the meeting coincided with UK Prime Minister Theresa May's formal notification the country was beginning the process of seceding from the EU.

Rajoy has previously said Brexit would be bad not just for the UK but for the rest of Europe too, and the goal must be to ensure "the best possible relationship" between the two both during process and in future — although he said it should be made "very clear" that countries "cannot be better off" outside the EU than inside.

Moreover, Spanish Foreign Minister Alfonso Dastis has said Madrid will not accept Brexit terms that put its interests at risk in Gibraltar, the tiny British Overseas Territory in southern Spain.

"We will not agree to any documents that will undermine Spain's position on [Gibraltan] sovereignty or back Gibraltar's economic activities that hurt Spain's interests. We have made a very generous co-sovereignty offer, but two can't dance if one doesn't want to," he explained.

We'd like to invite you to our discussion event in Gibraltar on Brexit & citizens rights on 25 April @SimonManleyFCO https://t.co/PWL5xyNrRn pic.twitter.com/xRxkMOE0oV

Gibraltar was ceded to Britain in 1713. Madrid continues to lay claims to the region, despite two referendums showing an overwhelming number of inhabitants upheld UK sovereignty.

Although in the June 23 Brexit referendum, nearly 96 percent voted in favor of remaining in the EU, the region will be leaving the EU together with the UK.