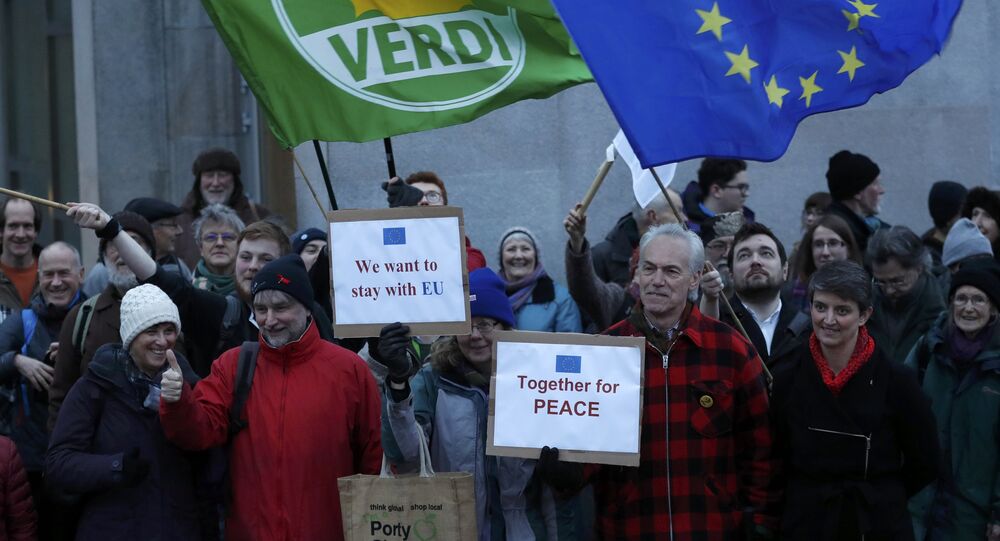 The Scottish Parliament has backed a new independence referendum that could eventually see Scotland leave the UK. The parliamentary approval gives First Minister Nicola Sturgeon the green light to ask the UK parliament for a new plebiscite within the next two years. Radio Sputnik discussed the issue with English political scientist John Curtice.

John Curtice said that what Nicola Sturgeon could do now was persuade the UK MPs to back Holyrood and also convince the majority of pro-Union-minded Scots that Scotland will be better off as an independent country.

During her recent visit to several European countries, Nicola Sturgeon tried to drum up support for the idea of Scotland remaining inside the EU after Brexit. Her calls pretty much fell on deaf ears though.

© AFP 2021 / James Glossop
Theresa May in Battle to Keep Scotland in UK, Britain Out of EU
When asked if this negative attitude could cause problems for her negotiating strategy going forward, Curtice said that the problems Nicola Sturgeon now faces are closer to home than to Europe, which remains circumspect about the issue of Scottish independence.

“It’s not clear that Brexit is an issue which is capable of changing the peoples’ minds about the merits of Scotland becoming an independent country. This is a clear example of ‘democratic wishes of a country can be overturned by a vote in a country south of the border,’ just as happened with the UK referendum,” John Curtice continued.

He added that Scotland remains almost equally divided on the independence issue, just like it was before the first referendum in 2014.

He also said that if British Prime Minister Theresa May eventually fails to deliver on the promises that Britain will be better off outside the EU, this could change the minds of the pro-Union-minded people in Scotland.

© AFP 2021 / Andy Buchanan
Ex-First Minister Says Independent Scotland May Leave Currency Union With UK
“They might say that ‘hang on, we’ve apparently been sold [on Brexit promises], and maybe independence is a better idea after all,’” Curtice noted.

He added that this would not necessarily lead to a constitutional crisis in the United Kingdom.

“The UK government’s position is that Scotland joined [England] voluntarily in 1707 and, therefore, always has the right to secede, much in the same way as the UK is now exercising its right to secede from the European Union,” Curtice said.

'It's still unclear whether Brexit can persuade Scots to leave the United Kingdom,' he added.

On Tuesday the majority of lawmakers in Edinburgh supported the call of First Minister Nicola Sturgeon to authorize the secession vote.

In 2014 Scotland rejected independence with more than a half of voters wanting it to remain a part of the United Kingdom.

However, after the Brexit vote, which wasn’t supported by the majority of Scots, First Minister Sturgeon said that the people of Scotland have the right to decide on their future before Britain’s breakaway from the European Union.