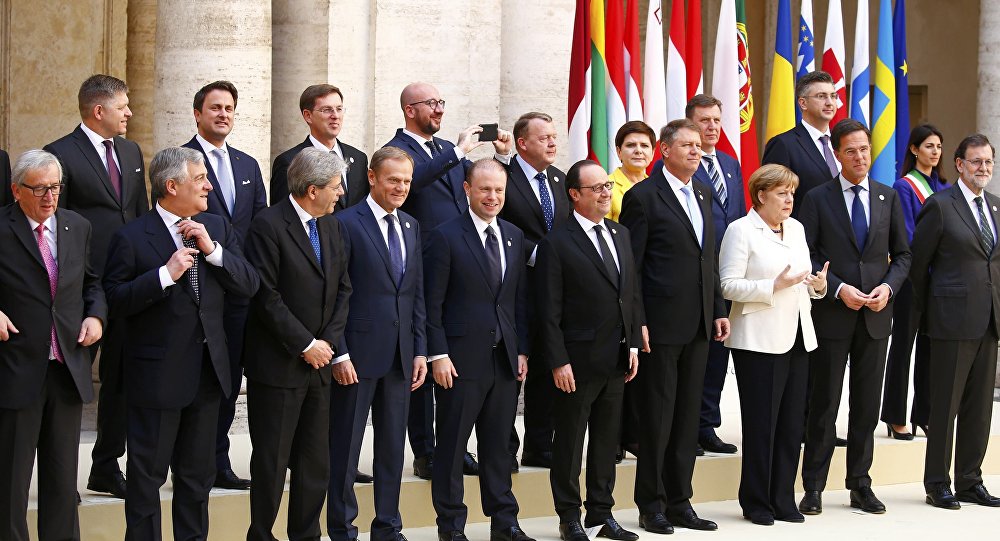 On March 25, the leaders of the 27 EU member-states signed a declaration to “restart” the badly divided European Union. In an interview with Sputnik, Gian Micalessin, a military reporter with the Italian newspaper Il Giornale, spoke about the political crisis facing the EU and its future relations with Russia.

© REUTERS / Alessandro Bianchi
The EU 'Could See Even More Political Tensions in Coming Years'
Speaking about the worst mistakes made by the EU, which is marking the 60th anniversary of the 1957 Treaty of Rome, Gian Micalessin singled out cooperation with those who ousted Libyan leader Muammar Gaddafi, which set off the migrant crisis Europe is now grappling with.

“Another big mistake was our support for the terrorist cutthroats in Syria who are now running wild in Europe, and also the 2014 breaking of ties with Russia. We lost our best ally in the war on terror. These are the three mistakes that caused the present crisis in Europe,” he said.

Gian Micalessin also mentioned the economic and political damage caused by the conflict with Russia.

“Russia is our main economic and political partner and one of the closest ones too. We lost each other,” he added.

Speaking about the principle of a “multi-speed” Europe the EU leaders approved in Rome, Gian Micalessin said that it would hardly help steer Europe out of the deep political crisis it is now going through.

“It’s like giving aspirin to a cancer patient. Europe should change its foundations, it needs new rules. In its present form it is no longer working. With different gears it will keep going back instead of moving forward,” he emphasized.

© Photo : Pixabay
Versailles Summit Called to Rethink EU Project 60 Years After Treaty of Rome
During an EU summit in Versailles on March 6, the leaders of France, Germany, Italy and Spain called for the creation of a so-called "multi-speed" Europe.

On Saturday, the leaders of 27 EU member states signed a declaration on the challenges and priorities of the bloc post-Brexit at a summit, devoted to the 60th anniversary of the Treaty of Rome. The UK was the only member state which didn’t sign.

The Treaty of Rome marked the foundation of the European Economic Community, the EU’s predecessor. It was signed on March 25, 1957 by Belgium, France, Italy, Luxembourg, the Netherlands and West Germany.