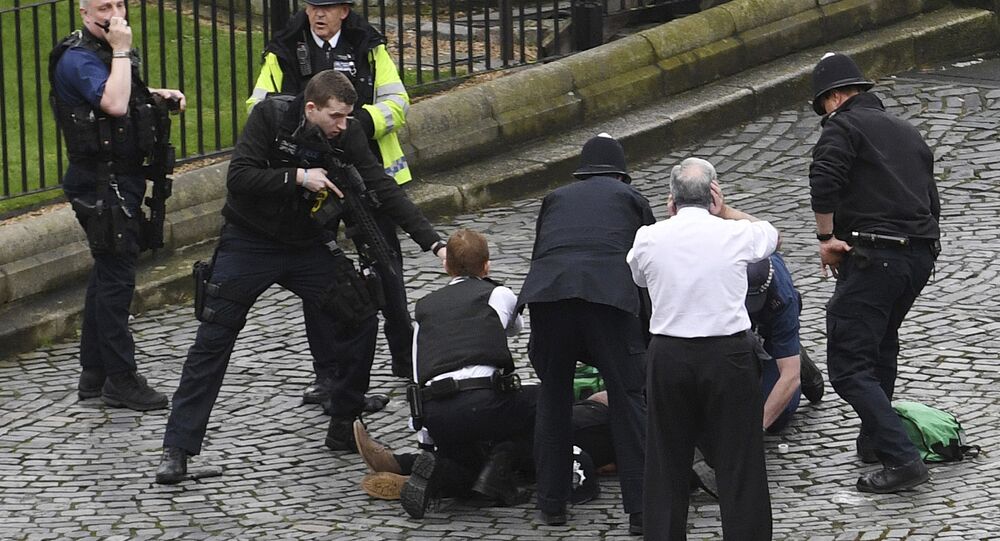 British Members of Parliament to Reconsider Armed Police at Westminster

British members of parliament are likely to backtrack on their hostility to armed police at the perimeter of the Houses of Parliament, following the March 22 terror attack, which saw five people - including a policeman at the palace gates - and fifty other injured, Sputnik has been told.

Security at the home of British democracy — the Houses of Parliament — is to be reviewed following the terror attack, when 52-year-old Briton Khalid Masood drove a car into pedestrians on Westminster Bridge before stabbing a policeman to death inside the gates of parliament.

© AP Photo / Matt Dunham
Floral tributes to victims of Wednesday's attack are tied to a lamppost outside the Houses of Parliament in London, Friday March 24, 2017.

There was concern that the policemen at Carriage Gates — one of the entrances to the Palace of Westminster (the meeting place of the House of Commons and the House of Lords, the two houses of the Parliament of the United Kingdom) — were unarmed.

Although there are armed guards within the confines of the palace at all times, those on the perimeter gates do not normally carry guns. Most British police do not carry arms and successive polls have shown that both the police and the British public prefer ordinary policemen to be unarmed.

© Photo : Niklas Halle'n
British police officers work on Westminster Bridge, adjacent to the Houses of Parliament in Westminster, central London on March 22, 2017, in the aftermath of a terror incident.

In the Westminster attack, Masood crashed his car into the railings at Westminster before running through the gates with a knife, where he was apprehended by PC Keith Palmer, who was stabbed by Masood and died at the scene. Masood was quickly shot by armed officers and also died at the scene.

​"I think the Sergeant at Arms [the person responsible for keeping order in the parliamentary estate] will review it and get through to the ministers. My inside sources say they've been trying to implement and install more robust security around the Palace of Westminster, but it's been the MPs that have opposed it," a senior UK security expert, Will Geddes, founder of ICP Group, told Sputnik.

"In the wake of the nasty scare they had last week, [MPs] will be slightly more compliant to the fact that more resilient measures need to be put in place," he said.

Heartbreaking. This is not the first attack on London or our Parliament — and won't be the last — but our values will prevail.

"We have a people police force, rather than a state police force. It is about interacting with the general public, rather taking a state stance, as in France, Germany, the US and most places around the world. So there is a fine balance to be struck between accessible and being draconian."

"What we have to be very cautious about — even in the wake of the Westminster attack last week — that we can't move to a more draconian stance, because we will lose all the key values and cultures that the UK police have generated and worked hard achieve over many, many years."

​"I think, while there needs to be [tighter security], there still needs to be an unarmed contingent, because — is in the case of PC Palmer — perhaps 90 percent of the work that he did was interfacing with the general public. It comes back to this whole people policing, rather than state policing [philosophy]. He was there having photographs with kids and tourists," Geddes told Sputnik.

Geddes told Sputnik that the immediate response to the March 22 by all the emergency service — known as the blue lights — was fantastic.

"The response was amazing. It goes to show how well prepared we are for these kind of events. When you compare our response to other nations when they have had attacks, ours is considered, tiered, well-managed, introduced at all the right implication thresholds. It's [proof that all our blue light services have been very well-drilled in terms of what they need to do," Geddes told Sputnik.