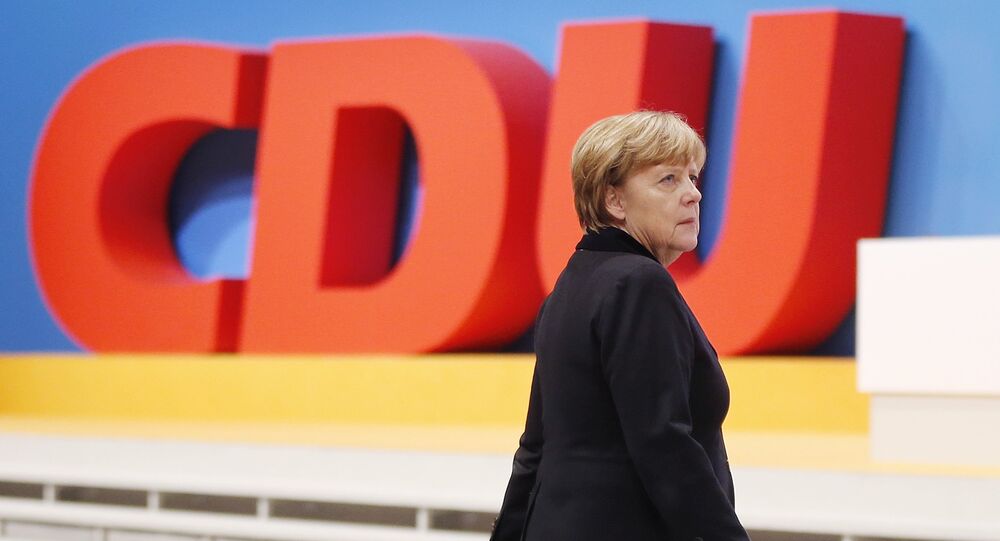 A group of right-wing critics of Angela Merkel in the Christian Democratic Union (CDU) have joined forces in an effort to sway the party towards more conservative values.

© REUTERS / Fabrizio Bensch
Merkel Slips in Polls as Majority Calls for Ex-EU Chief Schulz to Form Gov't
Members of Angela Merkel's Christian Democratic Union (CDU), critical of her leadership, have formed a group which aims to steer the party in a more conservative direction ahead of federal elections this autumn.

On Saturday, 70 representatives of local CDU branches around the country met in Schwetzingen, in the state of Baden-Wuerttemberg in south-west Germany.

They voted to form a group called the Liberal-Conservative Beginning (FKA), which opposes Merkel's policies.

"We have received an incredible amount of encouragement from all levels of the party," Alexander Mitsch, who was elected the group's chairman, said.

"We want the CDU to adapt its policies," and "provide a home for disappointed members," he explained.

Mitsch said that one of the group' main criticisms of Merkel is that her open-door migrant policy doesn’t reflect their more conservative views on the issue.

"We call for the introduction of a limit on the intake of refugees," a proposal that Merkel has so far rejected.

© Photo : Pixabay
'Be Braver and Save Europe': Germany's AfD Party Rallies Voters After Dutch Eurosceptic Defeat
As the FKA held their inaugural meeting on Saturday, the German magazine Der Spiegel reported that the CDU leadership is planning to tighten its migration policy ahead of federal elections in autumn.

"We want to do everything to ensure that the number of refugees remains permanently low," a paper prepared by the CDU's Federal Committee for Internal Affairs said, Der Spiegel reported.

The proposed measures include a plan to stop family reunions after March 2018 for asylum seekers who don't qualify for refuge under the Geneva Conventions or German asylum law, but have been given "subsidiary protection" because of the threat of death or torture in their homeland.

Subsidiary protection is usually granted for one year and may be prolonged at the discretion of the authorities.

The paper also criticizes the lax deportation practices of some German states, and proposes to sanction states if they don't accept refugee quotas. The CDU also proposes setting up "regional reception centers" for refugees in North African countries.

The traditionally center-right CDU party, which governs Germany in coalition with its sister party the CSU and the Social Democratic Party (SPD), is facing competition from the right wing Alternative for Germany (AfD).

The anti-immigrant AfD has enjoyed significant success in several state elections over the past year. In September, the party received 20.8 percent of the vote in Merkel's own state of Mecklenburg-Vorpommern and 14.2 percent in Berlin, where the CDU received 19 percent and 17.6 percent respectively.