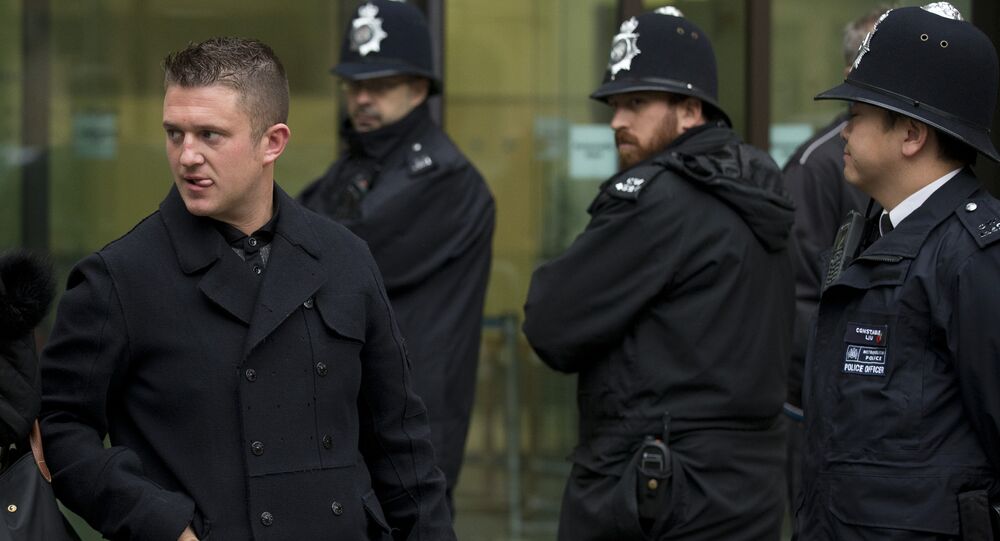 Right-wing activists and political figures took to social media in the wake of the March 22 attack in London attributing it variously to the creeping 'Islamization' of the UK, disastrous immigration policy and the failure to take the terror threat seriously.

Among the most prominent agitators was Tommy Robinson, former chief of the English Defence League (EDL) and founder of 'anti-Islamization' group Pegida UK. He arrived seemingly within minutes of the shooting, before the full-scale of the attack was known — while panic and confusion reigned, he told assembled media representatives the incident "is Islam" and "an act of jihad."

The scene of where I am in London. This is islam pic.twitter.com/PY0phkr00V

When asked why he was so quick to attribute the attack to Islamic elements, Robinson replied that he didn't "have his head up [his] a**e."

"450 former [Daesh] fighters have been allowed to return to our country. He will have been radicalised in a prison or on the streets of the UK with the full knowledge of our government and the security services," Robinson claimed.

He added that the attack would have followed guidance from the Islamic State and its online Inspire magazine.

He remained at the scene until dusk, haranguing gathered crowds and firing an inexorable salvo of incendiary messages on Twitter — however, while he was quick to retweet his supporters' praise, his account was also deluged with condemnation from critics, who claimed he was exploiting the attacks to disseminate Islamophobic propaganda.

Muslims make up only 4% of the uk population, look at the continued chaos & destruction they cause, what do u think it will be like with 20%

Is Tommy Robinson really just another racist or is he bringing up genuine issues which are being brushed under the carpet? It's hard to tell

I'd like to apologise to @TRobinsonNewEra for ever thinking he might be wrong on Islam in UK. This is coming from a Iraqi-Arab. #westminster

Tommy Robinson literally ran to Westminster to incite racial hatred. Media orgs giving him a platform are facilitating that. Ignore him.

Very upset and depressed by the terrorist attack in Westminster, but unfortunately not surprised.

While the soon to be ex-MEP did not expand on his statement via Twitter, in a subsequent radio interview he urged Britons to uniformly support any anti-terror initiatives launched by the UK government in response, saying the controversial ban on laptops for people flying from countries in the Middle East and North Africa had not been enacted by governments because they were "bad people" but "because they genuinely are trying to make us safer."

@StinsonHunter @njjea @Nigel_Farage So you also now believe in enflaming a sensitive situation to take political advantage of the fall-out?

Others still claimed the attack served as an argument for Brexit, suggesting the attack was at least indirectly caused by the 'open borders' necessitated by the bloc's freedom of movement policies. However, while the identity of the attacker is yet to be released, it has been confirmed by Prime Minister Theresa May that the culprit was "British born" — and there are suggestions Brexit could exacerbate security issues in the UK, rather than resolve them.

Why this attack now?
Islamists do not want #Brexit & border control. #Article50 means no more entry or exit for this vermin.#Westminster

@Nigel_Farage Before Muslim immigration there were NO beheadings NO terror attacks. Completely stupid politicians have blood on their hands.

For instance, the UK is a member of Europol, which helps police crime across borders, signatory to the European Arrest Warrant system, in which EU members transfer people sought by another. EU countries also share data on air passengers and information on suspects. These assets may no longer be applicable post-Brexit.

French presidential frontrunner Emmanuel Macron also made the case for "much increased cooperation on intelligence sharing" with both the UK and Germany following the attacks.

My thoughts are with London. Together we will never cease to prove that love triumphs over hate, tolerance over fear https://t.co/s77BAS89N7

My thoughts are with the victims of the Westminster attack. Europe stands firm with the UK against terror and ready to help.

Among the notable figures calling for calm was Brendan Cox, widow of MP Jo Cox, murdered June 2016 by a far right extremist. He urged the public to not let the attack "divide us" and sent his thoughts to the injured.

In the days to come I hope we will remember the love & bravery of the victims not just the hatred &cowardice of the attackers.