The death of former IRA terrorist, Irish republican Martin McGuinness will undoubtedly leave a giant hole in Northern Ireland politics, with the passing of a man who renounced the Armalite and forged the Good Friday Agreement which brought peace to the province.

However, before his death he precipitated the biggest political earthquake since the peace process began, leading to the end of a unionist majority at Stormont, leaving the Northern Ireland executive and Assembly in limbo.

McGuinness is widely acknowledged to have been a senior commander in the Provisional Irish Republican Army (IRA) which fought a murderous campaign for three decades in an attempt to achieve a united Ireland, separate from the clutches of the United Kingdom and London. 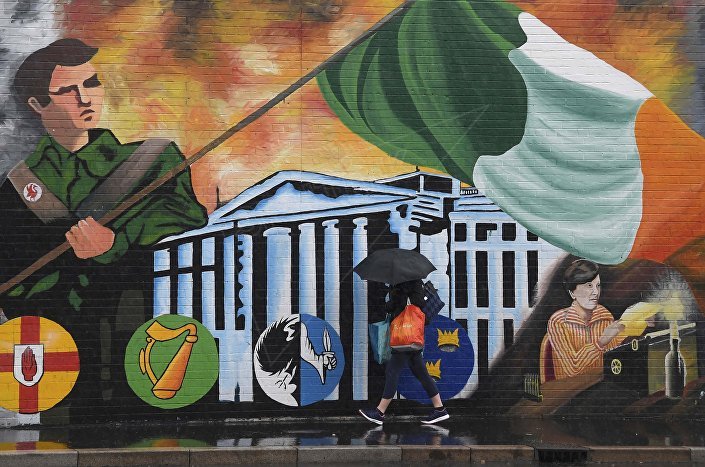 Although he claimed to have left the IRA in 1974, he was widely associated with it for years, as he took up the cause of the republican political party Sinn Fein.

Tonight we will gather at the Old Andersontown Barricks Site at 7.30pm to remember and to pay our respect to Martin McGuinness. All Welcome pic.twitter.com/LfleG0M3rY

The IRA's killing and bombing campaign reached its zenith in 1984, when it claimed responsibility for the bomb that exploded in the Grand Hotel, Brighton, England, where — then — Prime Minister Margaret Thatcher was staying during the party conference that year.

Sputnik's Jim Ensom was drinking in the hotel on the night the bomb went off and followed Thatcher — who was left uninjured in the bombing —in the aftermath of the atrocity, which left five dead and 31 injured.

"Thatcher was taken to the local police station, from where she emerged to talk to us. She was defiant in the face of the bombing — as per her 'Iron Lady' persona — and vowed to deliver her conference speech as normal, on time at 9.30 am. That she did, gaining her approbation for her resolve against the IRA," Jim said.

The Brighton bomb marked a turning point in the Northern Ireland Troubles and McGuinness gradually used his influence to argue that a political solution — rather than violence — was the inevitable way forward. In this he was joined by Thatcher's successor John Major and, then, Labour's Tony Blair.

"There will be some who cannot forget the bitter legacy of the war. And for those who lost loved ones in it that is completely understandable. But for those of us able finally to bring about the Northern Ireland peace agreement, we know we could never have done it without Martin's leadership, courage and quiet insistence that the past should not define the future," Blair said.

The Prime Minister's statement on the death of Martin McGuinness: https://t.co/8TNbOUPjiZ

© REUTERS / Clodagh Kilcoyne
Northern Ireland Deadlock Continues as Assembly Left in Limbo
The peace process resulted in the Good Friday Agreement, April 1998, which has brought about peace in Northern Ireland, but has also led to the political limbo that McGuinness now leaves as his legacy, after having resigned, January, as deputy First Minister, triggering political stalemate.

Under the unique system in Northern Ireland, the two major parties elected to the Northern Ireland Assembly enter into a power-sharing agreement, whereby the majority party nominated the First Minister to the Executive, which carries out the work of the devolved government, while the second largest nominates the deputy First Minister.

On my way home from Brussels to my home town of Derry — a city broken with grief — We love you Martin — always have & always will #RIP pic.twitter.com/VCgG8mBFdT

​Following the elections, May 2016, the Democratic Unionist Party (DUP) and Sinn Fein won the most seats, with the DUP winning 38 and Sinn Féin winning 28 of the available 108 seats. The DUP nominated Arlene Foster as First Minister and Sinn Fein nominated former IRA paramilitary commander Martin McGuinness as deputy First Minister.

However, McGuinness resigned, January 9, after a row between the two parties over a botched green energy scheme originally overseen by Foster, which was supposed to incentivize people to switch to renewable, but which ended in farce when the scheme paid out more than the cost of the fuel, leaving taxpayers with a bill of up to US$486 million.

RIP Martin McGuinness. A giant of republicanism and an inspiration to us all. pic.twitter.com/4cdZe3LqvS

​In the ensuing election, March 2, the DUP lost its long term majority and all parties are now deadlocked. If no agreement on a coalition is reached in a week's time, direct rule could be reimposed from London — a politically dangerous route to take, historically — or another election could be called.

McGuinness began his adult life a gun-carrying leader of the IRA, which attempted to blow up Thatcher, moved into politics and played a major role in bringing peace to Northern Ireland. He dies having created the biggest political shock since the Good Friday Agreement. In life, in death, his influence is massive.