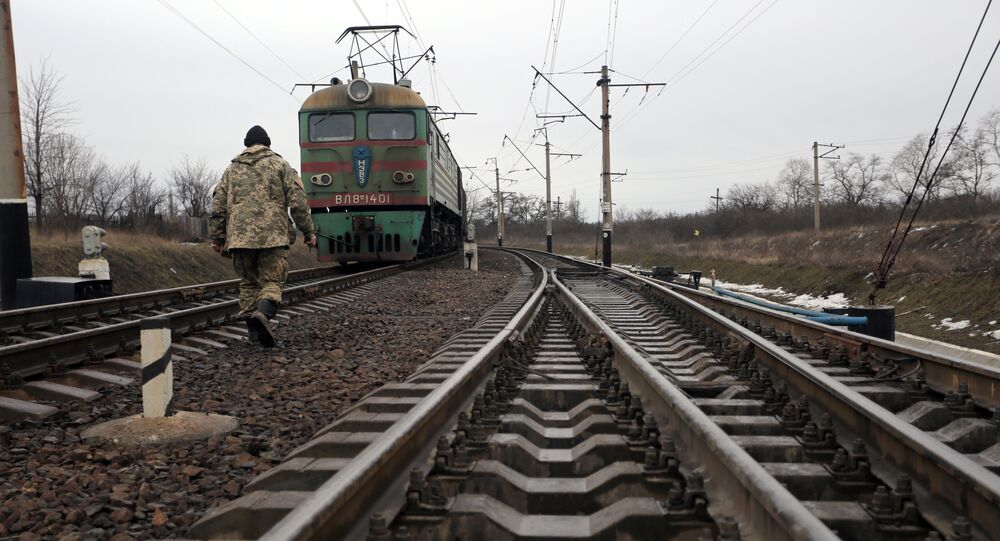 Kiev's cargo blockade of the self-proclaimed Donetsk and Lugansk People's Republics is putting their planned reintegration into a centralized Ukraine at risk.

© AFP 2020 / TOBIAS SCHWARZ
On the Precipice: Poroshenko's Own Gov't, US, EU Attack Him Over Donbass Blockade
On March 16, Ukrainian President Petro Poroshenko signed a decree officially severing the rail connection with the self-proclaimed Donetsk (DPR) and Lugansk (LPR) People's Republics in eastern Ukraine.

The decree legitimized a makeshift blockade of the railway tracks between Ukraine and the breakaways, initiated by a few radical lawmakers and nationalist volunteer fighters, which had been in place since late January.

The blockade led to irregularities in supplies of anthracite coal from Donbass, leading to power shortages in Ukraine and prompting Kiev to declare an energy emergency.

In response to the blockade, the authorities in DPR and LPR nationalized companies in Donbass which had until that point been subject to Ukrainian jurisdiction and paid taxes into the Ukrainian budget.

© Photo : Pixabay
Tit for Tat: Donetsk Republic Punches Back and Declares Trade Blockade on Kiev
Poroshenko explained that his order legitimizing the blockade was intended to force these companies to return under the control of Kiev.

His decision represented a U-turn on his earlier disapproval of the blockade and its financial costs. The controversial blockade has also been criticized by Prime Minister Volodymyr Groysman and opposition MPs.

Writing in Deutsche Welle, Ukraine analyst Bernd Johann notes that the decision will have grave consequences for the eventual integration of the territory into a decentralized Ukraine in line with the Minsk Accords agreed in February 2015.

"The Ukrainian plans for a reintegration could become so much wasted paper with such action. Politicians in eastern Ukraine — along with many in Kyiv — have long pointed out that Ukraine is doing too little to win back the people of Donbass. Now those goalposts seem to be moving further and further away," Johann wrote.

He pointed out that not only does the blockade deprive the rest of Ukraine of valuable energy supplies, it leaves companies in Donetsk and Lugansk no choice but to export their goods via Russia.

"The economic blockade and nationalization of Ukrainian firms massively increases the influence of Moscow on Donetsk and Lugansk. Now, these areas can only export to or over Russia. Kiev is on the verge of losing the regions of Donetsk and Lugansk long-term," Wehrschutz warned.

On Sunday, ZN.au reported sources in the Ukrainian Finance Ministry who said that the government stands to lose around two billion hryvnia ($74.5 million) in direct tax revenue from around 40 companies in the DPR and the LPR.

"The situation with payments to the pension fund and income taxes is much worse — after all, salaries at large companies with a lot of employees are paid officially, on the whole," the source said.

While the Finance Ministry says it stands to lose 1.3 percent of GDP from the blockade, opposition politicians have estimated it could cause a drop in GDP of up to ten percent.