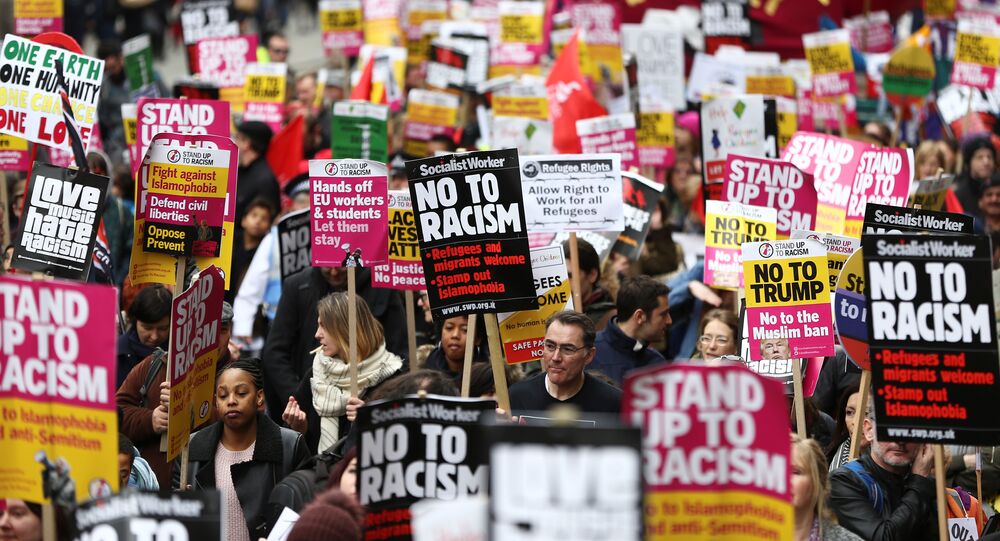 Approximately 30,000 people in the UK capital took to the streets on Saturday ahead of the International Day for the Elimination of Racial Discrimination to rally against what they regard as manifestations of racism and discrimination in the UK government's and US President Donald Trump's immigration policies, media reported.

© Photo : War on Want/iDJ Photography
Thousands in UK March Against 'Politics of Division and Hate'
MOSCOW (Sputnik) – According to a video footage published by RT Ruptly, the march started in front of the BBC Broadcasting House in Portland Place and went further to Parliament Square, where a demonstration took place.

The protesters reportedly carried banners, which read, in particular, "Stand up to racism," "Migrants and refugees are welcome here," "No to racism" and "Stand up to Trump."

In June 2016, the United Kingdom voted in a referendum to leave the European Union, with the pro-Brexit campaign focusing, among other things, on tighter immigration control amid huge influx of refugees and migrants from North African countries and the Middle East. The large-scale immigration also resulted in the rise of far-right parties across Europe.

Trump faced sharp criticism after he issued an executive order that restricted individuals from such Muslim majority countries as Iran, Iraq, Libya, Somalia, Sudan, Syria and Yemen from entering the United States for 90 days, and suspended refugees from entering the country for 120 days. After the first order was suspended by a US court, the US president issued another order, which excluded Iraqi nationals from the list.

On the Line on Duty: Number of UK Soldiers Abusing Marching Powder Rises

Thousands in UK March Against 'Politics of Division and Hate'