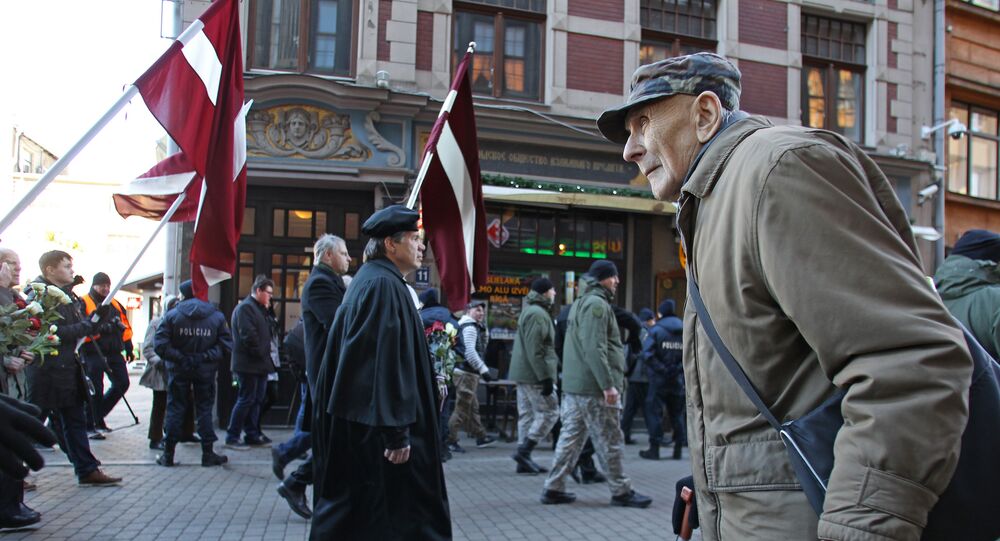 The latest annual march of Waffen SS veterans that was held in the Latvian capital on Thursday, March 16, may have dire consequences for the country, according to prominent Israeli political analyst Avigdor Eskin.

© REUTERS / Ints Kalnins
Turning Blind Eye to Neo-Nazi Marches in Latvia 'Shame for EU, NATO'
In the 1990s, the Baltic States were at the vanguard of World War II revisionism and the lionization of the Nazi war criminals, Eskin wrote for Russian newspaper Izvestia.

However, while previously the Remembrance Day of the Latvian Legionnaire — a commemorative event dedicated to the Waffen-SS formations formed by the Nazis in occupied Latvia – was observed as a national holiday, this year most Latvian politicians, save for several MPs from the right-wing National Alliance, opted not to participate in the event.

"Russia played a key role in the taming of the neo-Nazi fervor in Latvia. All these years Moscow was acting diplomatically and with restraint, and its incessant appeals to OSCE, European Parliament and to the UN committees finally had an effect on the Baltic States," Eskin remarked.

While Ukraine rushed to adopt the ideology of its own Nazi collaborators as the official state ideology, the Baltic States proved reluctant to follow their example, Eskin added.

He pointed out that the example of Ukraine which, despite the wave of Russophobia which engulfed the West, became barred from joining the EU, has apparently became a sort of deterrent for the Baltic States and other Eastern European states that exhibit revanchist attitudes.

"The European anti-Nazi legislation swiftly outlaws any attempt to absolve, promote or lionize Nazism. And in that regard the monsters'' victorious march in Riga, sanctioned by the local authorities, becomes a challenge to the whole of civilized Europe. While banning such abominable events at home, Europe is willing to exercise leniency towards what’s going on in the Baltic States… It’s hard to shake the feeling that this double-standards policy is not just related to Russophobia, but also caused by the perception of the Baltic States’ citizens as second-class people," he wrote.

All in all, Eskin surmised, nothing good will come out of the events like the Waffen SS march in Riga because as old proverb goes, "You can’t grow rye by sowing lie."

"By portraying people who betrayed Latvia and fought for Hitler as heroes, these falsifiers of history risk casting doubt not just on their right to be a part of Europe that defeated Hitler, but on their very independence as well. Because we all know where the ideology of hatred towards people leads to," Eskin said.