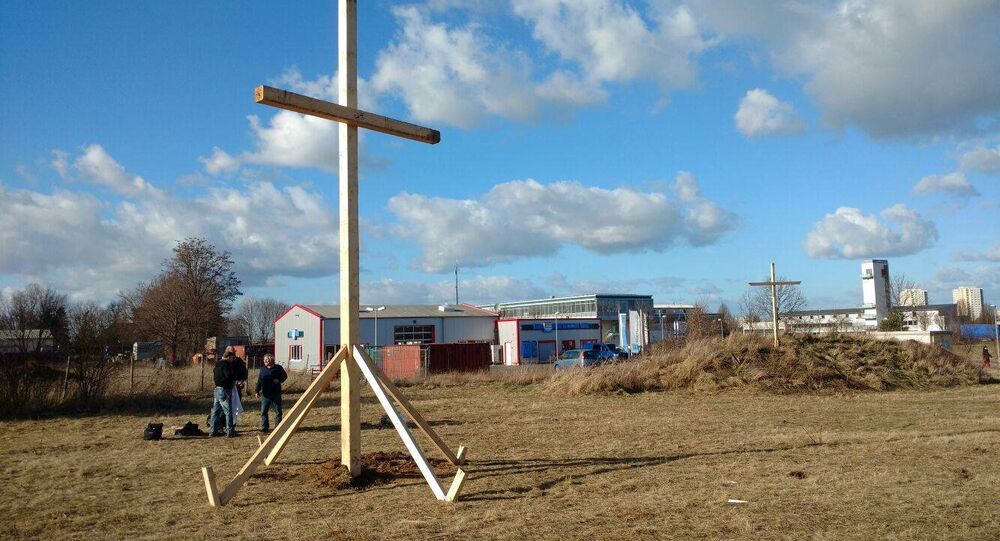 Construction of the first mosque in Thuringia has been hampered by opposition from right-wing activists who have hammered ten crosses into the construction site in a sign of protest, Sputnik Deutschland reported.

© REUTERS / Fabrizio Bensch
Turkish Foreign Minister: 'Holy Wars Will Soon Begin in Europe'
Muslims in Erfurt, the capital of Thuringia in east-central Germany, are being discouraged from building a mosque there by right-wing extremists who have rammed ten crosses into the planned construction site.

The group, called "Citizens for Erfurt," planted the crosses at the beginning of March. According to the local MDR news network, the owner of the construction site is planning to take legal action against the group, which maintains a Facebook page with its activities.

The mosque is being constructed in the settlement of Marbach for the local Ahmadiyya Muslim community, a sect of Islam which was founded in 1889 by Indian religious leader Mirza Ghulam Ahmad. Ghulam Ahmad claimed he was the Messiah and Mahdi prophesized by Prophet Muhammad. In this way, Ahmadi Muslims differ from the rest of the Muslim world, which is still awaiting the second coming of Jesus.

However, Imam Said Ahmad Arif, imam of local Ahmadi Muslims, told Sputnik Deutschland that the demonstration won't stop the construction of the mosque.

The community "will not allow ourselves to be provoked."

"This is not something that scares us," Arif explained. He said that local people in Erfurt have given the community "incredible support."

The activists who planted the crosses "are in the minority," Arif said. He added that his fellow believers have received political support from religious communities and politicians across the spectrum, "apart from Alternative for Germany (AfD)."

"The cross stands there as a symbol of the Western world (and for the) Christian-religious Enlightenment tradition of Europe. For me this is not an abuse, but an appropriate use (of the cross)."

Herold said that Muslims don't need to build mosques in order to practice their faith, and should be content with prayer houses. In her view, the Ahmadiyya Muslim sect is a "conservative and very prescriptive kind of Islam," which is "not entirely compatible with the German constitution."

​However, local evangelical Christians told Sputnik they are supportive of the Muslims' right to construct a place of worship.

Pastor Ricklef Muennich condemned the use of the cross to protest against the mosque. He told Sputnik that Muslims and Christians in Erfurt enjoy good relations and even hold an interreligious discussion group together.

"There is no reason to ram ten crosses into the ground as a sign of battle. The cross of Jesus really stands for love, for love of your neighbor and your enemies," he said.

"According to our constitution, this freedom is not only for Christians but also for Jews and Muslims. Therefore, we support the right of the Ahmadiyya community to set up a mosque here."

The protests with the cross "are supposed to be a signal that we are stopping Islam from beginning to spread out here, (but) it's not true that we – as some are worried – are under threat from Islam."

"I think people in Marbach are misused for other and much greater outside interests," said the pastor.

© AP Photo / Juergen Schwarz
German Right-Wing Party Reacts to Mosque Construction With 'Go to Africa' Flyers
He agreed with Thuringia state government spokeswoman Inga Hettstedt, who said that the protests are largely being carried out by people who are not from the local area.

She told Sputnik that the local government was prevented from removing the crosses from the field because they were on private land.

"There was no danger arising from these crosses," Hettstedt explained.

Erfurt respects religious freedom and "is receptive to the planned construction of a mosque for the Ahmadiyya community," she continued.

Experience in other cities shows that initial fuss over the construction of a mosque tends to "largely settle down" after building begins and local people get to know their Muslim neighbors better, Hettstedt said.

"The Catholic and the Protestant congregations also make an important contribution and show that many common misunderstandings can be avoided with community dialogue," she added.

Cuba to Build Its First Mosque