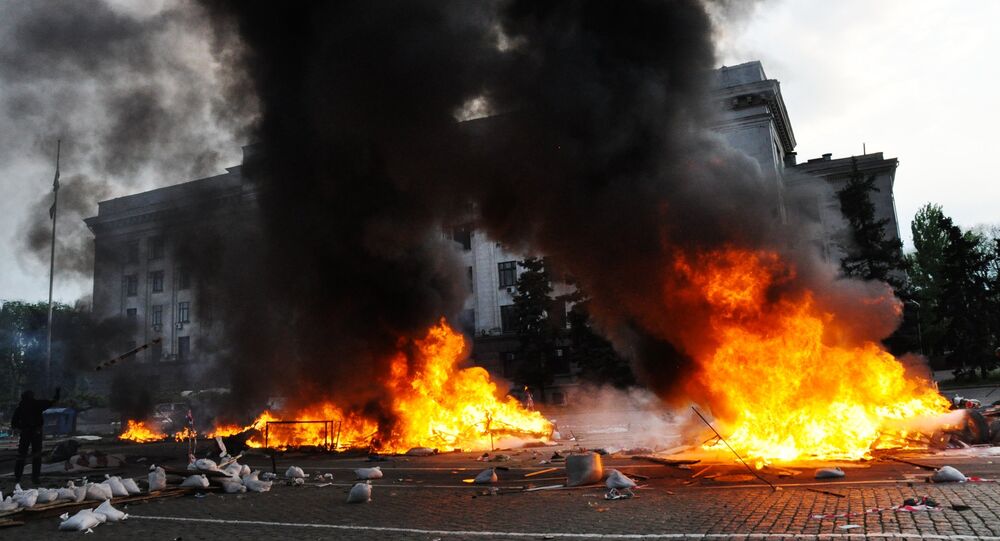 Ukrainian authorities are giving the cold shoulder to activists calling for tackling political repression in the city of Odessa, one of campaigners told Sputnik.

"The Odessa Solidarity Campaign released our statement on the political repression in Odessa, Ukraine, on March 6. A few days earlier, I had written directory to Valeriy Chaly, the Ukrainian ambassador to the United States, raising the same concerns in my capacity as a newspaper reporter," Wilayto said. "We have not heard back from the ambassador or any other Ukrainian official."

In their latest statement, the US activists urged the Ukrainian government to immediately release Alexander Kushnarev, father of a victim of the Odessa massacre, as well as to stop harassing members and supporters of the Council of Mothers of May 2.

Wilayto explained "the main purpose of the written contact and the statement was to alert the government of Ukraine that people in other countries, including the United States, are aware of, are concerned about and are monitoring the situation in Odessa."

Kushnarev was arrested by Ukraine’s Federal Security Service in February, and accused of planning a kidnapping of Rada deputy Alexei Goncharenko. The deputy went missing for a short period of time, but then reappeared and said that his abduction was staged to prevent a real attack.

Wilayto pointed out that since the 2014 coup in Ukraine, the Ukrainian people’s right to free speech has been steadily restricted.

"The continuing demand of Odessans for an international investigation into the massacre of May 2, 2014, has been a particular irritant to the federal government," he stressed. "If the voices of the brave people of Odessa are allowed to be silenced, Ukraine will have taken another huge step toward becoming an undemocratic police state in collusion with murderous fascist groups."

When asked about a possible role the United States could play in the Odessa issue, Wilayto said, "The US government has already played a big role, by supporting the 2014 coup against President Viktor Yanukovych."

Wilayto also stated the US government should stop interfering in the internal affairs of other countries, regardless of whether initiating and supporting coups in Ukraine, promoting "regime change" in Syria or bombing Libya, Somalia, Iraq, Pakistan, Yemen.

"Despite the softer tone the new administration has taken toward Russia, all those criminal activities are continuing as before, as well as plans for a massive new military build-up," Wilayto pointed out.

The activist also underlined that the activists did not get much attention for their efforts from the previous US administration of Barack Obama.

Earlier in March, the US State Department said in its 2016 human rights report that the Ukrainian government did not take proper steps to investigate abuses committed by national security forces or prosecute those responsible for mass riots in Odessa and the Euromaidan shootings in Kiev.

On May 2, 2014, pro-Kiev radicals blocked anti-government protesters in Odesa's House of Trade Unions and set the building on fire by hurling Molotov cocktails inside. The incident left some 50 people dead while the overall number of casualties exceeded 250.

Several lawsuits over Odessa's massacre, including riots, murders, negligence of police and firefighters, have been considered by a Ukrainian court since November 2014.

In July 2016, the Office of the United Nations High Commissioner for Human Rights (OHCHR) accused Kiev of protracting the probe into the massacre despite UN appeals.

The Odessa Solidarity Campaign was founded in May 2016 by the United National Antiwar Coalition after it sponsored a delegation of US human rights activists to attend the second memorial of the Odessa massacre held at Kulikovo square.