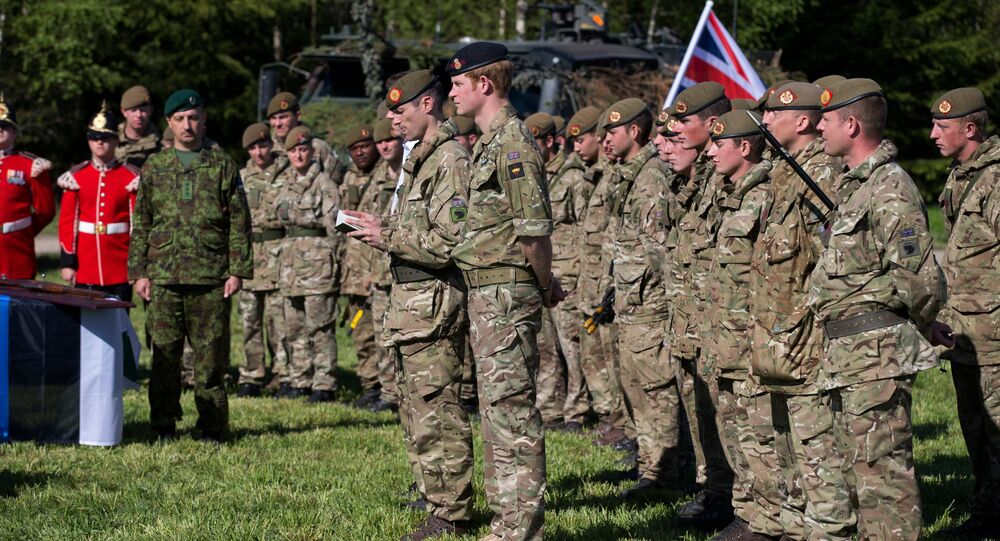 UK Ambassador to Estonia Theresa Bubbear has said the 800 British troops due to be stationed in the country as part of a NATO force will be as crucial to the security of not merely the Baltic states, but also Berlin, London and Paris - but a defense expert has told Sputnik the deployment should not be viewed as a hostile act by either side.

Soldiers from the 5 RIFLES regiment, along with tanks and armored vehicles, are to be based a mere 80 miles from the Russian border from April for a scheduled five years, the UK's first long-term deployment to a Russian neighbor since the end of the Cold War in 1991.

"This isn't a big country protecting a small one, this is an alliance of equals. However, this isn't about protecting Tallinn or Estonia — this protects Berlin, Paris, London and every NATO partner. We should all care enormously about this," Bubbear said.

Great to be back @ukinestonia. Highlights of a busy day: cake with the team + interview with @CharlotteBFBS on UK troops coming to Estonia pic.twitter.com/RTmuLk0cWJ

The UK deployment will be supported by Danish and French soldiers, and join the 200 US soldiers already stationed in Estonia.

British troops to arrive in #Estonia this Friday https://t.co/1pi17v2uC8 pic.twitter.com/w8a457mS3U

The contingent was requested by the Estonian government, on the ostensible basis the country is "threatened" by neighboring Russia. Exaggeratedly nightmarish pronouncements about the looming threat of a Russian incursion into the country, issued by the Estonian government, have spooked citizens to such a degree that some have volunteered for the country's official paramilitary force, the 6,000-strong Defense League (EDL), which states it is on standby in the event of a Russian invasion. The group has drawn on tactical lessons from insurgent groups the world over, including the Taliban.

A key area of concern, the Estonian government has claimed, is the border city of Narva, where 90 percent of inhabitants speak Russian and many moreover identify as Russian.

Presently, the Narva River divides Estonia and Russia. Despite protestations from the city's Russian language newspaper that "there is no such desire" on the part of the Russian Federation to absorb the city into its own borders, and cordial relations existing between the pair behind closed doors — the two governments are collaborating on treaties regulating land and maritime rights — Estonian ministers have made a number of alarmist statements on the matter.

Claims of Russian designs on the city of Tallinn are not the only ones that stretch believability to breaking point, however. Mikk Marran, director general of the Information Board, Estonia's main intelligence agency, has expressed concerns for the safety of British troops when they arrive in Estonia — he believes they are at risk of getting into drunken bar fights with locals, orchestrated by attractive female Russian agents running strategic "honeytrap" operations.

Nevertheless, despite the provocative potential of the deployment, defense consultant Nick Watts believes it, and Bubbear's comments, may be an exercise in diplomatic signaling to allies and enemies alike by London.

"In a post-Brexit world, the UK is keen to still be perceived as a good neighbor and defense partner by its European allies. The country has long-favored a 'NATO-first' card in Europe, and wishes to be seen as a leading player in the alliance — UK leaders are putting their money their mouth is, and reassuring Europe and the US we still think the continent, and NATO, are important," Mr. Watts told Sputnik.

Mr. Watts stresses that the force is far from huge, and largely symbolic — a "significant" symbol of the UK's commitment to NATO, but a symbol nonetheless.

Furthermore, the likely reconciliation of Russia and the US under the Presidency of Donald Trump will undoubtedly mean a further cooling of tensions in future.

"Trump may well end up being similar to Reagan — a tough talker who also open to and looking for opportunities to collaborate and engage with Russia. I can't believe diplomatic conversations aren't currently taking place between the two countries, and other NATO members are likely involved in similar discussions of their own with Russia too. The deployment may only last a year," Mr. Watts continued.

"That will mean an opportunity to revive the NATO-Russia Council. Russia always took it seriously, the Russian ambassador always attended. While it hasn't really functioned since the Ukraine crisis, it hasn't been destroyed — rather, it's been held in abeyance."

NATO has been steadily building its military presence in Central and Eastern Europe ever since 2014, using alleged Russian aggression as a pretext. Russia has repeatedly voiced its protest against the increased number of NATO troops near its borders.

"The alliance is known to have deployed hundreds of military bases along the rather big perimeter around Russia. The real increase in the number of NATO troops in countries neighboring Russia through permanent rotation of contingents as well as the lack of the constructive dialogue with us urge Russia to take serious retaliatory steps," Russia's Ambassador to Lithuania Alexander Udaltsov said in February.

NATO Battalions to Be Deployed in Baltic States, Poland by June – Stoltenberg