Under the terms of the Northern Ireland Act 1998, the devolved government in Belfast must comprise the largest party from each of the unionist and nationalist communities, and must be headed by nominees of those two parties.

However, when Sinn Fein's Martin McGuinness resigned, January 9, as deputy First Minister, it triggered the automatic loss of office of the Democratic Unionist Party's (DUP) First Minister Arlene Foster and the effective collapse of the Northern Ireland administration, the Executive, forcing an election, March 2.

This election is about equality and respect for all our people and integrity in the institutions. Vote SF for the politics of hope not fear.

​McGuinness' resignation was — ostensibly — over a green energy scheme originally overseen by Foster, (known as the Renewable Heat Initiative, or RHI) which was supposed to incentivize people to switch to renewables, but which ended in farce when the scheme paid out more than the cost of the fuel, leaving taxpayers with a bill of up to US$486 million.

The results of that election, March 2, was that the DUP lost its overall majority, winning 28 seats and Sinn Féin gained, taking 27 seats. However, negotiations over power-sharing have been hampered by a lack of trust between the two main parties, with Sinn Féin refusing to accept Foster as First Minister until the results of an investigation into the RHI scheme has been concluded.

Crucially, according to analysis by the UK Institute for Government, the results also mean the DUP will no longer have the 30 members necessary unilaterally to wield a "petition of concern" — a mechanism established to ensure that crucial votes have cross-community support, and which has in the past allowed the party to veto legislation that has majority support in the Assembly such as on marriage equality.

The 90 representatives of the Northern Ireland Assembly will register by 1600 UK time, March 13, but will then disperse, as there is still no agreement on power-sharing.

The leader of the Traditional Unionist Voice (TUV) party, Jim Allister, described the situation as "a fiasco" and symbolic of the failings of the Northern Ireland peace process. 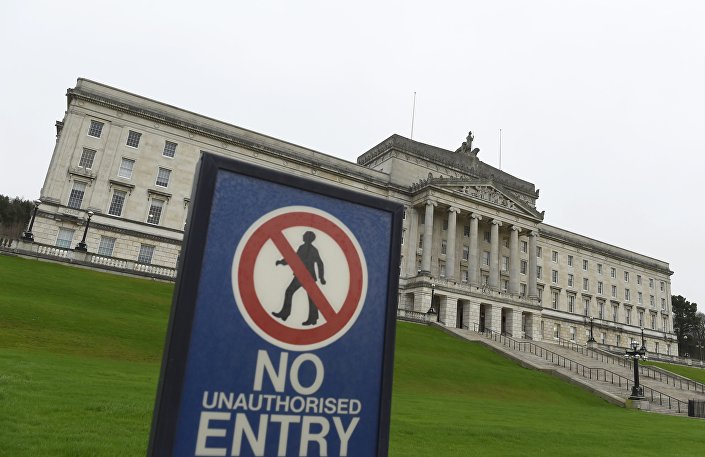 © REUTERS / Clodagh Kilcoyne
The Parliament Buildings at Stormont are seen behind a no entry sign, a day after deputy first minister Martin McGuinness resigned, throwing the devolved joint administration into crisis, in Belfast Northern Ireland, January 10, 2017.

If no agreement is reached within the next two weeks, in theory, power returns to London and direct rule is imposed, once again fanning the flames of disunity within Northern Ireland and threatening the whole peace process.