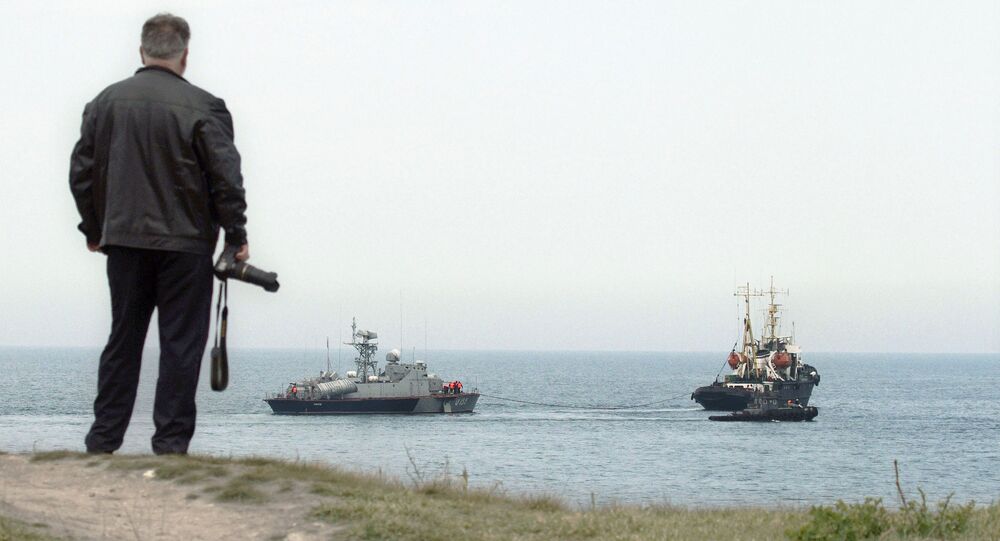 The Ukrainian Navy is considering buying decommissioned NATO gunboats. Russian politician Nikolai Starikov told Sputnik that even if NATO gave Ukraine its old Island-class patrol ships for free, it would still cost more money than Kiev has to modernize them.

“This is scrap metal the Americans are selling Ukraine. First, they are ramping up tensions on the Russian border and, simultaneously, are making money by getting rid of what they no longer need themselves,” said Starikov, who is the leader of the Great Fatherland Party.

Meanwhile, First Deputy Commander of the Ukrainian Navy Andriy Tarasov said that the US patrol boats that can be handed over to Ukraine are either obsolescent or obsolete and will be replaced by new vessels with extended capabilities, but they still remain combat-capable.

© AP Photo / Sergei Polyakov
Bargain Basement Gunboats: Ukraine Hopes to Rebuild Navy Using Old NATO Ships
"To make it clear – these are not second-hand [vessels]. A boat that is delivered by a NATO member country has been maintained in the way that its combat capacity remains almost unchanged. For example, 20 years are quite okay for a missile boat, it remains fully combat-capable," Tarasov assured.

Nikolai Starikov said, for his part, that “this is a simple arrangement that benefits the Americans, not Ukraine.”

“Ukrainian officials are like children always happy to get some toys from the big guys to play with. They never think about earning money to reequip their armed forces though.”

“The pattern is always the same: the Americans give Ukraine loans to buy pensioned-off armored vehicles and other equally obsolete weapons. The Ukrainians wind up neck deep in debt and the Americans get their money back,” Starikov added.

Following the Maidan coup and Crimea's return to Russia, the size of Ukraine's Navy was cut in half, with many of its officers and seamen leaving the Navy and volunteering to join the Russian Black Sea Fleet instead.

© Photo : BalamoothKh
Gunboat Diplomacy: Donetsk Forces Prep for Amphibious Attacks by Ukraine's Navy
The Navy's size dropped from about 15,000 to 6,500 men, and its center of operations moved from Crimea to Odessa. Many senior officers, including vice admirals and rear admirals, joined the Russian Navy.