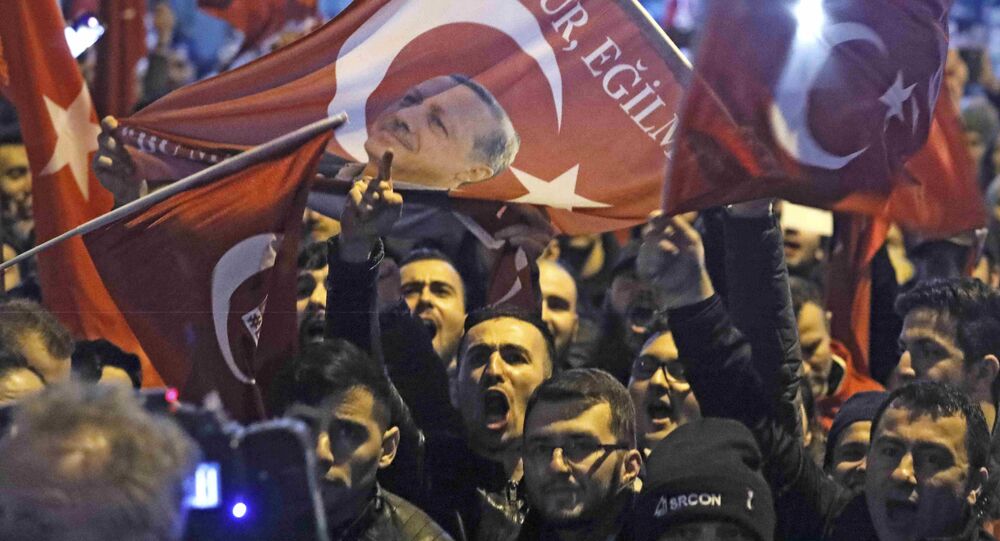 Earlier in the day, Cavusoglu threatened the Netherlands with sanctions, in case he is prevented from meeting with Turkish expats.

"They do not know politics or international diplomacy. These Nazi remnants, they are fascists. You can stop our foreign minister’s plane all you want, let’s see how your planes will come to Turkey from now on," Erdogan said speaking at a rally in Istanbul.

Ankara has been seeking support from Turkish expats for a constitutional referendum on transition from the existing parliamentary system to an executive presidency.

If the amendment is passed the Turkish president will have the right to issue orders, dissolve the parliament, impose a state of emergency and appoint ministers and other senior officials. The office of the prime minister will be abolished by 2019. The vote on the constitutional amendment is scheduled for April 16.

© AP Photo / Christian Charisius
Dutch Police Disperse Protesters at Turkish Consulate in Rotterdam
Despite the Turkish leadership's efforts, a number of pre-voting rallies have been canceled in Germany, the Netherlands and Switzerland.

According to Vladimir Kornilov, a political analyst and director of the Center for Eurasian Studies, suggested that the diplomatic spat is related to the electoral situation in the Netherlands.

Cavusoglu’s planned visit was actively criticized by Dutch right-wing activists, in particular by the Party for Freedom and its leader Greet Wilders, who called for banning it.

© REUTERS / Murad Sezer
Constitution Changes to Plunge Turkey Into Authoritarianism - Council of Europe
In an interview with the Russian online publication Vzglyad, Kornilov pointed out that the Dutch government made the move due to rising anti-immigration sentiments and public support for nationalist parties and movements, in a bid to save its fragile electoral chances.

General elections are planned to be held in the Netherlands on March 15.

"Since Prime Minister [Mark] Rutte doesn’t want an open conflict with Turkey the government expects to find a way to reconcile with Ankara after the election. But the problem is that no one knows who will be prime minister after the election and what balance of forces will be in the government. This is why the current situation in Dutch-Turkish ties is unpredictable," Kornilov said.

Meanwhile, according to the analyst, the row between Ankara and Amsterdam is harmful for both countries.

© REUTERS / Umit Bektas
Turkish Family Minister Arrives in Netherlands by Road Amid Rally Row
Kornilov explained that both Turkey and the Netherlands are major economies with a broad network of bilateral ties. The Netherlands is also home to a considerable Turkish diaspora, which can influence the domestic political situation.

The Dutch government has to consider the opinions of the Turkish part of its electorate. Moreover, the Turkish community itself is divided over relations with Erdogan.

"Opposition sentiments against Erdogan are on the rise [in the Dutch Turkish community]. His political opponents are prominent. All of the above have an effect," Kornilov said.

The expert continued: "The fact that Cavusoglu threatened the Netherlands with sanctions is actively being discussed. The situation is actively exploited by right-wing politicians. In fact, the scandal has shifted the agenda prior to the election. Now, foreign policy issues are being widely discussed."