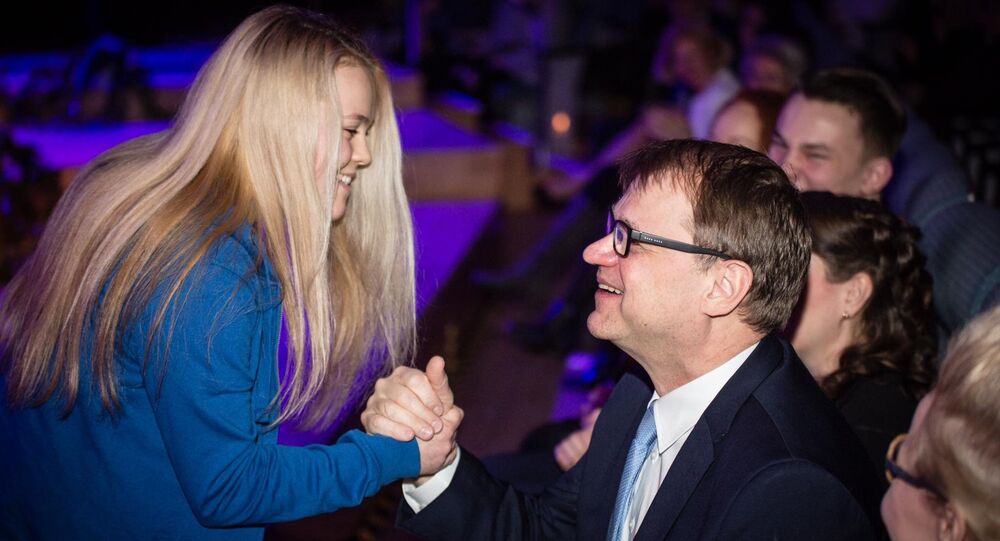 Prime Minister for a Day: Finnish Girl Takes Over Finland

On October 11, which is recognized as International Girl Day, Finnish Prime Minister Juha Sipilä will step aside as the chief minister and head of the government. Instead, a teenage Finnish girl will call the shots. This move is part of the worldwide #GirlsTakeover challenge.

© AFP 2020 / FRED DUFOUR
While the Genders are More Equal Than Ever Before, Festive Feminism is Still Needed
For one day, 15-year-old Katariina Räikkönen from the town of Raisio in western Finland will take over as head of the Finnish government in honor of International Girl Day, Finnish national broadcaster Yle reported.

Despite her tender age, Räikkönen is a member of the children's board of the Finnish branch of Plan, an international human rights organization. Earlier, Plan issued a challenged to the world's top politicians and captains of industry to let a girl take their position, using the #GirlsTakeover tag.

Finnish Prime Minister Juha Sipilä was quick to pick up the gauntlet during an equality event earlier this week in the Finnish city of Tampere.

"We need more women in decision-making. My calendar for October 11 says 'Katariina is on the case,'" Juha Sipilä said in his speech. Later on, he challenged his fellow prime ministers around the globe to do likewise in a tweet.

I will participate in the @PlanGlobal #GirlsTakeover day in October. I challenge my fellow Prime Ministers around the world to do the same.

Last year, girls from Plan temporarily took over as Nepal's president, Egypt's education minister and Canada's Minister of Status of Women. The goal of these "amicable takeovers" is to highlight girls' prospects and promote equal rights, career opportunities and chances to make a difference in society.

© Photo : Twitter/realDonaldTrump
Trump Emerges Unscathed From 'Brawl' With Swedish Feminists
Plan is an international non-profit organization working in 50-something countries across Africa, the Americas and Asia to promote and safeguard children's rights. Recently, it became known for its involvement in the Because I Am a Girl campaign, which addresses the issue of gender discrimination.

During the event in Tampere, Prime Minister Juha Sipilä also announced a new biennial international accolade celebrating gender equality, calling Finland "a long-standing pioneer" in this field. The International Gender Equality Prize, worth €150,000, will be given to a person or a group of people every two years for their exceptional promotion or defense of gender equality.

Finland ranks among European nations as having the biggest proportion of high-achievers among women, as well as women in the managerial positions and in parliament.

Earlier this year, though, a somewhat similar-minded Finnish PR-stunt, this time for diversity, backfired, as the choice of a black immigrant girl as Miss Helsinki 2017 triggered a massive outcry on the social media.