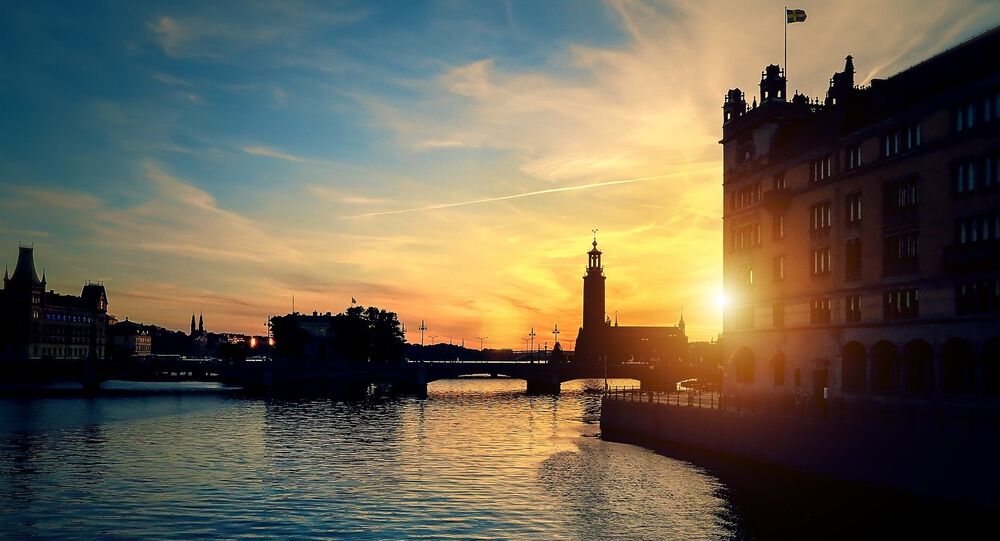 Almost all of the several hundred jihadists that have left Sweden to join terrorist paramilitary groups in the Middle East have been found to be collecting some form of government assistance. To make things worse, jihadists were found to be leaving fewer traces, complicating the authorities' preventive work.

© AP Photo / AP Photo via militant website, File
Danish Daesh Recruits Claim State Benefits at 'Home' While Waging War in Syria
Almost all of Sweden's 300 so-called "foreign fighters" share something in addition to their zest for religious warfare. They're all receiving government grants and maintain accomplices in Sweden, who handle their mail and give the impression that their cohorts are still in the country, a new report commissioned by the Financial Supervisory Authority has revealed.

"This is hardly surprising, as we have seen more or less the same pattern in other countries. What is surprising is that almost all of them had this in common," Magnus Ranstorp, a researcher of terrorism at the Swedish National Defense College and one of the men behind the report told the Swedish national broadcaster SVT, citing deficiencies in security monitoring.

Ranstorp argued that there was no lack of money in circulation among Sweden's jihadi circles, whereas Magnus Norrmark of the Swedish Defense Research Agency stressed the role that the immediate circle of friends and relatives plays in terrorism support, complicating matters for the authorities.

© REUTERS / Anders Wiklund/TT News Agency
Jihadi 'Veterans' Return to Sweden, Establish Islamist Extremist Networks
The most common form of "jihadi support" involves grants from the Social Insurance Agency, such as housing allowances, child support, student loans, as well as maintenance and parental benefits. In the report, many jihadists were identified as applicants for student loans for studies abroad, which are paid in one substantial tranche and were therefore particularly attractive to "foreign students" of the jihadi kind. Yet another common pattern involves jihadi beneficiaries left in Sweden to send the money to their accomplices in conflict zones.

Even if some of the individuals may subsequently be found liable and obliged to reimburse the state for their ill-gotten assistance, there is little prospect for success in reclaiming the money, which is most often transferred abroad.

"It's no big money, they don't get rich on it, but it can get you a long way in a conflict zone," Magnus Ranstorp said.

© REUTERS / TT News Agency/Christine Olsson
Sweden's Awkward Attempts to Whitewash Its Public Image Backfire
Another closely-related problem which has left Swedish authorities with a major headache is that it has become increasingly difficult to trace down "foreign warriors," despite their shrinking numbers. Jihadists planning "foreign trips" were found to have adapted themselves to security services' monitoring efforts and take care to no longer leave tell-tale evidence. While car purchases and SMS-loans still occur, jihadists were reported to have become increasingly cautious. Among other things, they reportedly take significantly less time to prepare, to reduce the risk of possible detection.

"For instance, these people are trying to avoid bank cards when traveling abroad, making them more difficult for the authorities to follow. They have become more cautious," Magnus Ranstorp told Swedish Radio.

Fraud and tax crimes are other types of crime that is being more often revealed in connection with jihadism. A number of companies were thus reported to be used for reselling mobile phones and transferring money between different companies in order to successfully avoid taxation. In the report, tens of millions of kronor were expected to have been withheld from the Swedish state using tax-dodging schemes.

© REUTERS / Zohra Bensemra
Swedish Star Reporter Finds War-Ravaged Mosul Safer for Women Than Stockholm
Furthermore, extremists were found to have founded "assistance companies" to take advantage of the help from the Social Insurance Agency. Sweden spends 30 billion SEK ($3.3bln) annually on assistance allowances, which is more than the combined budgets of the police and the Security Service SÄPO. The cost has doubled over the last decade, with the number of people eligible for assistance remaining fairly constant, the Swedish daily Svenska Dagbladet reported.

The authors of the report found plenty of room for improvement for the authorities in order to nip the financing of terrorism the bud. In particular, things need to be sped up, since the report identified a number of cases when people continued to amass various contributions despite having joined terrorist groups months ago.