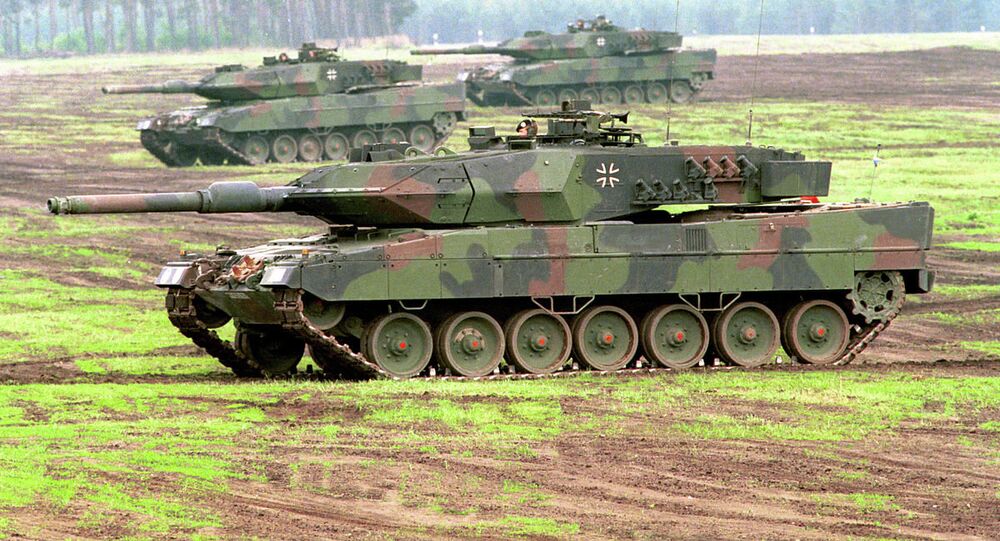 Earlier this week, EU members established a joint military headquarters to coordinate military operations abroad. For now, the joint command center, approved Monday, will be limited to coordinating European military training operations in Africa. However, German Foreign Minister Sigmar Gabriel has said that the creation of the center was "the first major step toward strengthening a common European defense and security policy."

© Sputnik / Alexey Vitvitsky
EU Establishes Plan for Foreign Operations Military Headquarters
Europe's leaders have voiced resistance to US President Donald Trump's insistence that each NATO member commit at least 2% of GDP to defense. In recent months, rumors about the creation of a European defense union have grown louder and louder.

In an analytical article for RIA Novosti, military analyst Ilya Plekhanov recalled that Trump isn't actually the first US president to ask NATO's European members to fall in line on defense. "As far back as 2011, then-Secretary of Defense Robert Gates prophesized that NATO would have a 'dim if not dismal future' if its European members didn't pony up and increase their spending." Gates warned that future US administrations may decide that the US's massive and disproportionate investments in NATO may come to an end if Washington finds that they are no longer worth it.

Former President Barack Obama has also complained of 'aggravating free riders' in the NATO alliance – countries which refused to contribute the 2% of GDP figure, the analyst noted. In his own time, Obama even privately told London that the UK would no longer be eligible to claim a "special relationship" with Washington if it did not commit to the required spending.

The Trump administration, of course, has been even more adamant, issuing what Plekhanov called "almost an ultimatum" to the Europeans. Addressing fellow defense ministers at a NATO conference in Brussels last month, Secretary of State James Mattis warned the US's European allies that "Americans cannot care more for your children's future security than you do."

"America will meet its responsibilities, but if your nations do not want to see America moderate its commitment to this Alliance, each of your capitals needs to show support for our common defense," Mattis said.

"It may seem, based on these figures, that NATO members really are 'free riders', as Obama put it," the observer noted. In reality, however, things are much more complicated, he added.

"In reality, the 2% figure says very little. China, for example, spends 1.3% of its GDP on defense, and even that is worrying to Washington." At the same time, "Greece spends over 2%, but who can say that the nearly bankrupt country is making a significant contribution to financing the alliance's common defense? What real military contribution is made by Estonia?"

Indeed, the latter country seems more concerned about sexy Russian secret agents provoking bar fights with NATO troops stationed on its soil than anything of any real significance.

© AP Photo / Andreea Alexandru
A serviceman of the "Fighting Eagles" 1st Battalion, 8th Infantry Regiment, walks on a tank that arrived via train to the US base in Mihail Kogalniceanu, eastern Romania, Tuesday, Feb. 14, 2017. Five hundred U.S. troops began to arrive in a Black Sea port in Romania with tanks and hardware to bolster defense in this East European NATO nation.

In other words, Plekhanov noted, "the percent of GDP spent says nothing. What exactly is being done with this money – how many tanks a country maintains, or how many new missiles has it acquired," those are the real questions. "The US excluded, NATO members spend the equivalent of about $260 billion US a year on defense – with the US spending just over $600 billion."

The US and Europe have different goals for their spending, the analyst stressed. "The US has global aims, and is prepared to intervene in a conflict in virtually any region of the world, and constantly supports an immense material, logistical, military and IT infrastructure, along with a string of military bases, for this purpose."

Europe, on the other hand, "thinks, in the best case scenario, about issues and problems in its own region, and generally only in defensive terms. They have few joint operations with the US, and for this reason the '2% for all countries' figure does not evoke excitement in European capitals, and not out of greed. They simply do not have the same global ambitions that the US does."

© AP Photo / Alik Keplicz
Jean-Claude Juncker: 'The European Defense Must Become Real'
At the same time, Plekhanov emphasized that Europe nevertheless does almost everything that the US asks of it. "Its countries have participated in the wars in Iraq and Afghanistan, in Libya and Mali. Europe is participating in the air campaign in Syria, and training the Kurds in Iraq. They've taken the burden of a number of peacekeeping missions across Asia and Africa. European countries have more troops in the Balkans than the US does. They patrol the waters of the Mediterranean Sea and the Indian Ocean." And they do it all "with defense budgets of less than 2%."

Furthermore, the defense analyst wrote, "the US too aren't in Europe on terms which can be described as free market rates. Many military facilities are provided to the US free of charge or with significant tax breaks. The infrastructure around US military bases is built at the expense of European taxpayers."

© AP Photo / Czarek Sokolowski
Pushing for War? US-Funded Think Tank Calls for Deployment of 7 NATO Brigades Near Russian Border
This in turn has an impact on the US's logistical capabilities. "By virtue of its geography, and the deployment of its forces in Europe, America can, at significantly reduced cost, fight in the Middle East, even if the Europeans themselves do not participate in these wars. Washington does not need to carry out their missions directly from the US, or from the decks of its aircraft carriers. These costs borne by geography should also be added in the European defense budgets' favor."

Finally, and perhaps most importantly, Plekhanov noted that 'collective defense' does not necessarily mean military defense. After all, "it is Europe that has to face the consequences of military conflicts," often instigated by the US, "including taking in the flow of migrants, and participating in humanitarian, rescue and educational missions, investing in the reconstruction of countries that have been destroyed. In the field of this kind of 'soft power', the Europeans are often more effective than the Americans."

In other words, the journalist noted, the 2% figure is a constant source of irritation, displeasure and debate among European members of the NATO alliance. Moreover, for most European countries, 2% is a criterion that is simply unachievable – both for political and financial reasons.

Instead, Plekhanov stressed, Europe should consider the capabilities gets for the money it already spends. "The main thing is not how much is spent – but how." Sometimes, throwing money at a problem isn't the answer – the F-35 Lightning II being an excellent example of that.

For now though, Plekhanov wrote, it seems that the US plans to continue to exert pressure on Europe, demanding an increase in military spending, intimidating the continent by vowing to reduce US defense commitments or review relations, and trying to scare the Europeans via the one size fits all boogieman of the so-called Russian threat.