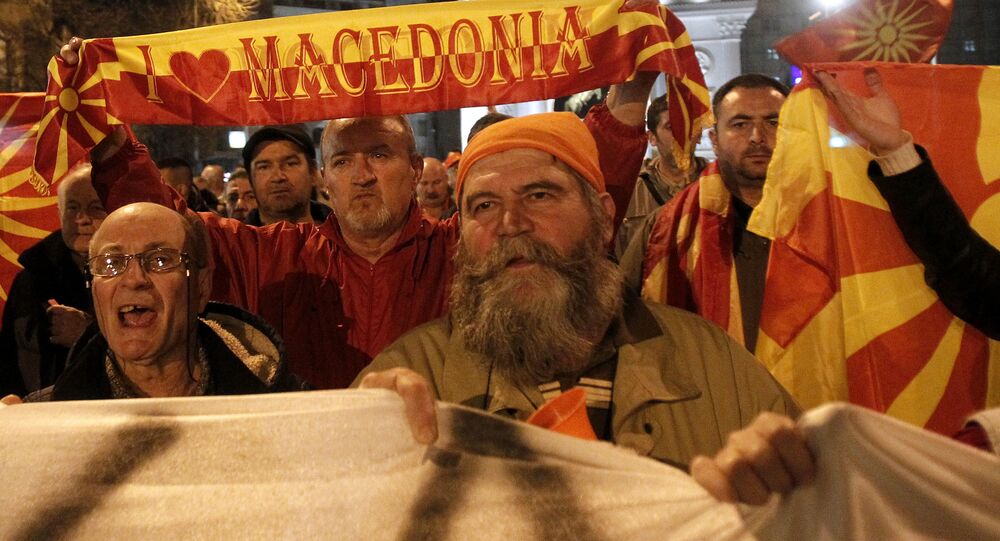 Macedonia is sinking deeper and deeper into a severe political and institutional crisis. Three months on from snap parliamentary elections held in December, a new government still hasn't been formed. Speaking to Sputnik, Svetin Chilimanov, former advisor to the Macedonian president, warned that the crisis may lead to the country's disintegration.

The SDUM, which came in second in December's elections, began talks with the Albanian minority Democratic Union for Integration (DUI) party after the Christian Democratic VMRO-DPMNE, the other of Macedonia's two major parties, failed to secure a coalition with the DUI in late January after winning a plurality in the elections.

© AP Photo / Boris Grdanoski
It's Time to Trust Russia, Not Trump, on Macedonia
Ivanov called the SDUM-led coalition's platform, which among other things proposes granting Albanian the status of second official language, unconstitutional. The president also warned that the "Tirana platform" (so-named after the capital of Albania, where Macedonia's minority Albanian parties met in January to outline the terms for their participation in a coalition) would lead to ethnic strife and threaten Macedonia's territorial integrity. Ivanov has appealed to US President Donald Trump, Turkish President Recep Tayyip Erdogan, and even NATO Secretary General Jens Stoltenberg for support against the opposition.

Former Prime Minister Nikola Gruevski, leader of the VMRO-PRMNE, has said that his party would support a SDUM-led minority government, if it gives up the Tirana Platform. Together with the language status issue, the platform is also believed to demand changes to the country's flag and national anthem.

"We are ready to support the SDUM to form a minority government if they give up on the law on languages, the Tirana Platform, and the proposal to redefine and degrade Macedonia," Gruevski said, appearing on Macedonian television late last month. "If Zaev wants to be prime minister so much, we'll let him implement his program, so long as it isn't jeopardizing state and national interests. He can attack us if he wants, but not the state," he added.

© AP Photo / Boris Grdanoski
Balkan Knot: Macedonia's Political Crisis Threatens to Redraw European Borders
Zaev rejected Gruevski grand partnership proposal, although this would have resulted in a coalition of 100 of the 120 total seats in parliament. This, observers say, indicates that the opposition leader seeks to ally himself exclusively with the Albanians. The DUI has already declared that a government can be formed even without the president's approval.

Asked to provide some insight into Macedonia's ongoing political crisis, Svetin Chilimanov, former advisor to the president, told Sputnik that if the parliamentary opposition moves forward and attempts to form a government without presidential approval, this will become a sort of 'overture to a coup d'état', because such a cabinet of ministers still won't be able to take the necessary instruments of power into its own hands by constitutional means.

"The legitimacy of such a government would be challenged, and not just in Macedonia itself, and would likely result in serious tensions," Chilimanov warned. "It is absolutely obvious that all of this has been invented in order to provoke such a reaction, because the demands of the Albanian parties run contrary to the country's constitution," he added.

Chilimanov recalled that opposition leader Zaev has repeatedly, and for several years now, indicated that he works actively with officials and ambassadors from other countries.

© AP Photo / Boris Grdanoski
Not Even 'Blood in the Streets of Macedonia' Would Deter NATO From Greater Albania Project
"It's clear that he has support from outside the country, especially from those states where social democratic parties are in power. He himself named the individuals who helped him during the election campaign; among them were members of the former Obama administration. He had apparently worked on some sort of project along with foreign countries, and when it became clear that he could not win the December elections, he turned to Albanian voters."

In other words, Chilimanov noted, "Zaev led two campaigns – one for the Albanians, and the other for the Macedonians who supported him."

Worryingly, the expert noted, Zaev has even hinted during the campaign that he might annul the Ohrid Agreement, a peace deal signed by the government and ethnic Albanian separatists back in 2001, in favor of an agreement more favorable to the Albanians. "Albanians," Chilimanov said, "understood this as a proposal for the country's federalization and division."

At the same time, Chilimanov warned that the president's authority is by no means unlimited, meaning that the Constitutional Court might revoke his decision not to give a mandate to the opposition government. Such an eventuality wouldn't end the crisis, but create a situation of dual power which could only further exacerbate the crisis in the Balkan country.