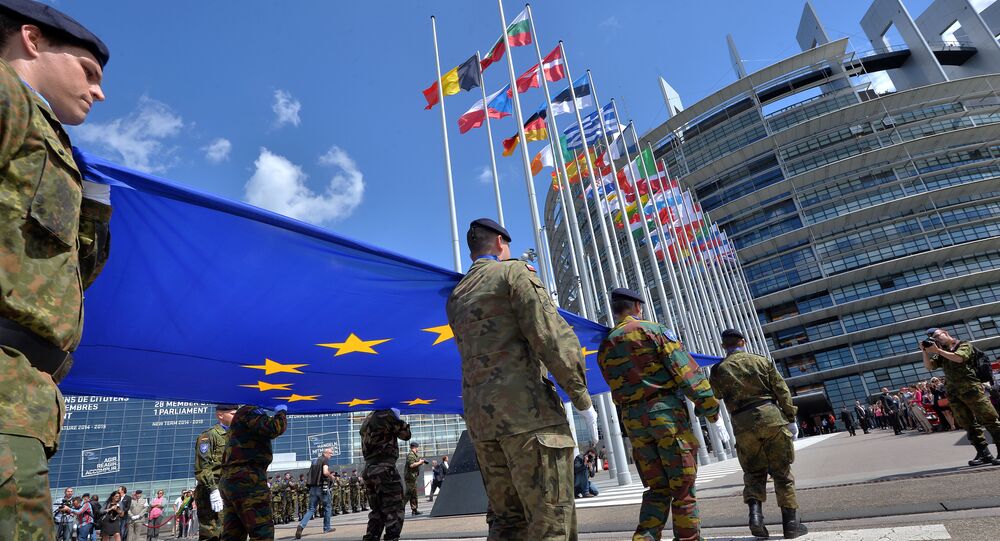 Germany should avoid joining a European army because it would put German military might at the disposal of its war-mongering neighbors, German politician Willy Wimmer told Sputnik.

The idea is supported by EU officials including Commission President Jean-Claude Juncker, who has called for "a new approach to building a European security union with the end goal of establishing a European army."

German CDU politician Willy Wimmer, former vice-president of the Parliamentary Assembly of the Organization for Security and Cooperation in Europe (OSCE) and former Parliamentary State Secretary to the Defense Ministry, told Sputnik Deutschland that Berlin has nothing to gain from an EU army.

He said that Germany needs a debate on its membership of NATO, which is "a danger to peace across the world," but Berlin shouldn't replace its membership with a European military alliance.

"In Bonn at the time of German reunification, we saw clearly that two parties were very interested in the potential of Germany's military apparatus. On the one hand the Anglo-Saxons, for their global wars, that has been exposed. On the other hand, the neighboring French Republic, which calls for one war after another in Africa in accordance with its economic and other interests," Wimmer said.

"This is the background of the European army which is being blathered about now. It is not an issue of creating a common military apparatus for European security policy but also of putting German military potential at the disposal of countries like France, Great Britain and the United States so that they can wage their wars with our soldiers."

Wimmer also discussed the criticism that politicians of the European establishment have directed at National Front leader Marine Le Pen, who is leading opinion polls ahead of French presidential elections in April and May.

On Monday, French President Francois Hollande, who decided not to put forward his candidacy for forthcoming elections, acknowledged that Le Pen has a chance of being French President come May.

"The threat exists" of a Le Pen victory, Hollande said, adding that "my ultimate duty is to do everything possible," to stop that from happening, he told the French newspaper Le Monde.

© AFP 2021 / JOHN MACDOUGALL
'We Want Peaceful Foreign Policy': German Leftists Call for Détente With Russia
Wimmer said that establishment politicians are quick to criticize right-wing movements such as the National Front but fail to acknowledge that they bear the political responsibility for their rise.

"It is quite absurd that those who are responsible for the change in the political situation in Germany, France and Europe, namely the established parties, now reproach people who make use of their right to vote for other parties."

"Europe should not have been allowed to be turned upside down by all these wars. We are involved in all these wars, led particularly by France, and then we wonder about the results. We lay responsibility on the people for the fact that they are not comfortable with the parties responsible for these wars. France is on the brink of civil war. They should be making sure that there are once again orderly conditions there and then this phenomenon will stop," Wimmer said.