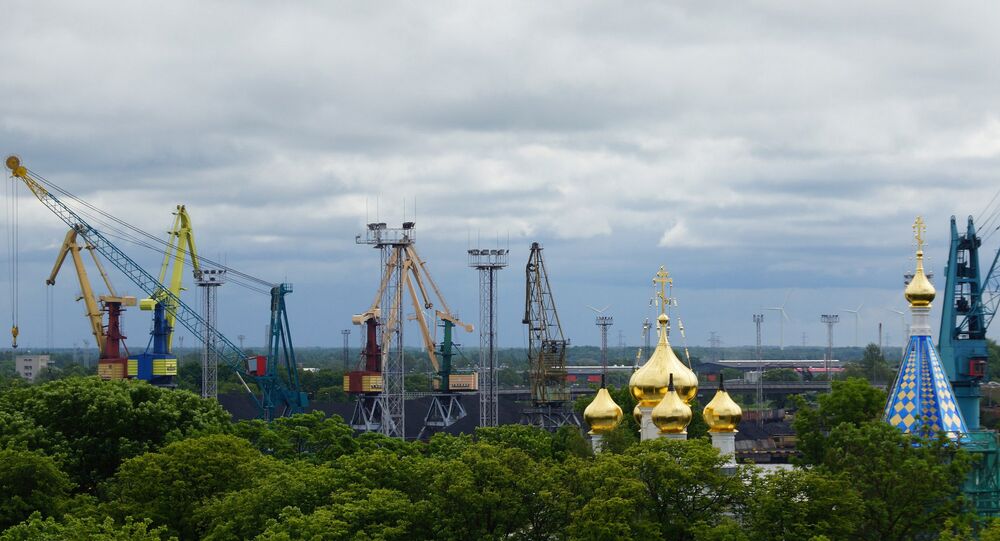 Latvia's State Language Center, the country's official language regulator, has begun to investigate Aivars Lembergs, the mayor of the town of Ventspils. The mayor's 'crime'? Speaking Russian in front of a Russian-speaking theater audience.

According to Latvian news portal mixnews.lv, Lembergs' troubles began at a signing ceremony with the Mikhail Chekhov Riga Russian drama theater last Tuesday. The mayor gave a short spur-of-the-moment speech in Russian after greeting the audience in Latvian. Lembergs explained that since most of the audience was Russian-speaking, it was only logical to speak to them in Russian.

© Flickr / Lukas Plewnia
Latvian National Detained After Flying Drone Over Polish President's Residence
"If the event is organized by the state or local government, the working language is Latvian. If a member of parliament makes a speech, he or she always needs to speak the state language," Berzina said.

If the State Language Center's investigation finds Lembergs guilty, the organizers of the event where he spoke will face an administrative fine of between 35-70 euros.

Commenting on Lembergs' legal troubles on Facebook, Riga Mayor Nils Usakovs, who has himself faced repeated harassment from the VVC, jokingly wrote "Welcome to the club!"

Usakovs has faced a long and drawn out investigation by the country's language police, most recently for speaking in Russian to students at a local job shadowing event last month.

© Sputnik / Mikhail Voskresenskiy
Estonia Worried Sexy Russian Secret Agents Could Provoke Bar Fights With NATO Troops
While Lembergs' investigation continues, Usakovs has already promised to appeal any SLC fine, and to take the matter all the way up to the Constitutional Court if necessary. The mayor has already faced fines from the agency for writing in Russian and English on social networks, and an investigation over his remarks in Russian at a May 9 commemorative Victory Day event.

Although it is spoken by nearly 40% of the population, Russian is officially considered a 'foreign' language in Latvia. About a quarter of the country's population comes from Russian-speaking nations of the former Soviet Union, including Russia, Belarus and Ukraine. Latvian, meanwhile, has 1.75 million native speakers, including both residents of Latvia and the country's extensive diaspora. The country's population, which peaked at 2.667 million in 1989, has since fallen to below 1.95 million, as citizens leave to pursue opportunities in wealthier parts of the European Union, which the country joined in 2004.

© Sputnik / Sergey Pyatakov
'Disgrace and Stupidity': Riga Mayor Slams Latvia's Bans on Russian Media
After gaining independence in 1991, Latvian authorities have made a concentrated effort to remove and limit the Russian language from public spaces.

The country's non-Latvian residents have also faced widespread and systemic violations of their rights, most ominously through the country's so-called 'non-citizens' law. That law affects about two thirds of non-Latvians, limiting their right to vote, pension rights, the ability to hold certain government offices, etc. The UN Committee on the Elimination of Racial Discrimination has described the government's treatment of these 'resident aliens' as discriminatory.