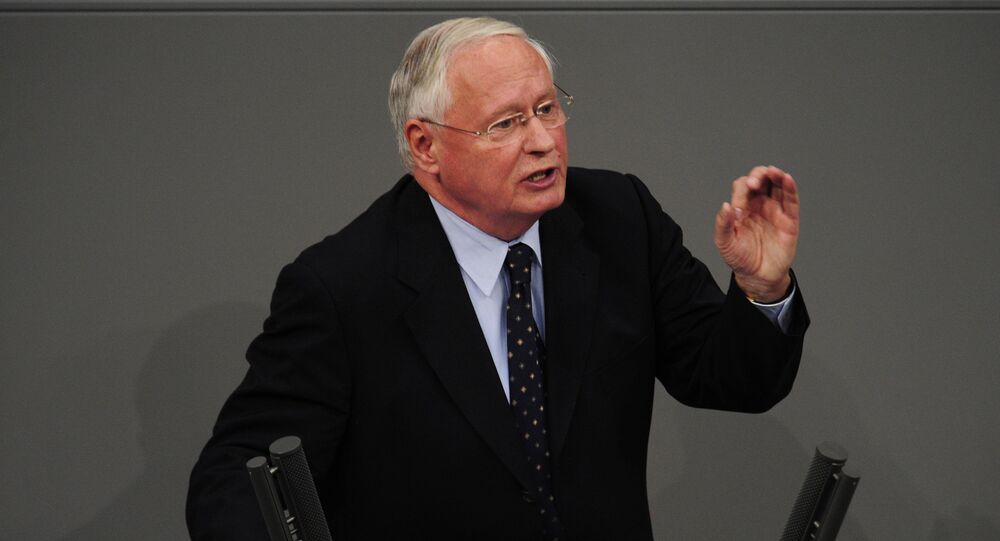 © REUTERS / Ints Kalnins
'Stop These Madmen': Germans Blast NATO Muscle-Flexing in the Baltics
Elections take place in three German states this spring, ahead of federal elections this autumn. Voters in the state of Saarland in southwest Germany go to the polls later this month.

The leading candidate on the party list of the leftist Die Linke is Oskar Lafontaine, former Prime Minister of Saarland and former German Finance Minister in the government of Gerhard Schroder.

He told Sputnik Deutschland that his party is hopeful of attracting support from people disillusioned with the economic policies of the governing CDU/SPD coalition.

"We need more infrastructure investment to boost the economy, unemployment is still too high. On the federal level, policy is concerned with the welfare state and a peaceful foreign policy," he explained.

With regard to foreign policy, Die Linke wants the German government to co-operate better with Russia.

© AP Photo / dpa, Bernd Wuestneck
Bundeswehr 'Almost Completely' Out of Ammunition, German Media Report
Lafontaine evoked the advice of former German Chancellor Willy Brandt, who served as Chancellor from 1969 and 1974. He pursued a policy of Ostpolitik, in which he sought to improve relations with Poland and the Soviet Union and create closer ties between West and East Germany.

"We can build on Willy Brandt's foreign policy, which was based on peace and balance, and on what he said: "Let us not upgrade, let us disarm and use the money for the hungry." In Africa, people are starving and we don't do anything and chatter about rearmament," Lafontaine said.

"We want a peaceful foreign policy. Here the Greens are a big problem, as the two top candidates have advocated a flight ban in Syria and are even talking about ground troops. They are also contributing to the confrontational policy towards Russia."

"Therefore, it is gratifying that the SPD at least want to use words – not yet deeds – to follow the détente policy of Willy Brandt. Regardless of your view of the system, one must be clear about German politics: we need not only good relations with the USA, we also always need good relations with Russia. This is in German and European interests."

© CC0 / Pexels
'Unprecedented Arrogance': German Media in Outrage Over Erdogan's 'Nazi' Comment
On Sunday, Turkish President Recep Tayyip Erdogan reacted to the German authorities' decision to cancel political rallies in Germany ahead of a referendum in Turkey that proposes to change Turkey's constitution and increase the powers of President Erdogan.

Several Turkish government ministers had planned to address potential voters in Germany, where there are approximately 1.4 million people eligible to vote in the referendum.

At a rally in Istanbul on Sunday, Erdogan lambasted the decision, calling it "no different than the Nazi practices of the past."

Lafontaine agreed with the decision to stop the rallies, but added that German politicians also bear responsibility for worsening relations.

"This is definitely an escalation, and one must see that the main problem is development in Turkey. Of course, there were also mistakes by the European community. Certainly, Germany made a mistake in giving Turkey false hopes of EU membership for so long," Lafontaine said.

"But if we look at how democracy in Turkey is being more or less abolished, thousands of people have been imprisoned, there is no more freedom of the press, then we have to quite clearly tell Turkey that we reject this policy. We must also clearly say that Germany can't be an arena for election campaigns in which the abolition of democracy is advocated."

With regard to domestic policy, Lafontaine said that the rising popularity of the Alternative for Germany (AfD) party is due to the failure of mainstream politicians to ensure citizens have stable employment.

"The fact is that many jobs have become uncertain. This means that people often don't know whether they can pay their bills at the end of the month, or whether they will have any work at all in a few months. So, all those who are responsible for the so-called 'precariousness' of the labor market – the CDU, CSU, SPD, FDP and the Greens – are responsible for the rise of the AfD."

Lafontaine said that while German politicians and some observers are keen to portray political opponents as "populists," their use of the term contains little substantive criticism.

"Politicians accusing each other of populism is a rather fashionable phenomenon. If one asks them what exactly they mean by populism, they usually start to stammer. I think you always have to argue so that people understand you, so you have to argue 'popularly.' Of course, there is one thing you must never do, and that is to create an atmosphere based on lies."

According to an opinion poll of voters in Saarland carried out last week by INSA for the German newspaper Bild, the CDU is currently supported by 36 percent of voters, followed by the SPD on 33 percent, Die Linke on 12 percent and Alternative for Germany on seven percent.

According to an average of two opinion polls taken on Tuesday and Wednesday, if Germany held federal elections this Sunday, the CDU/CSU and the SPD would both get 31.8 percent of the vote. The AfD would be next with 9.5 percent, followed by Die Linke on 7.8 percent and the Greens on 7.3 percent.