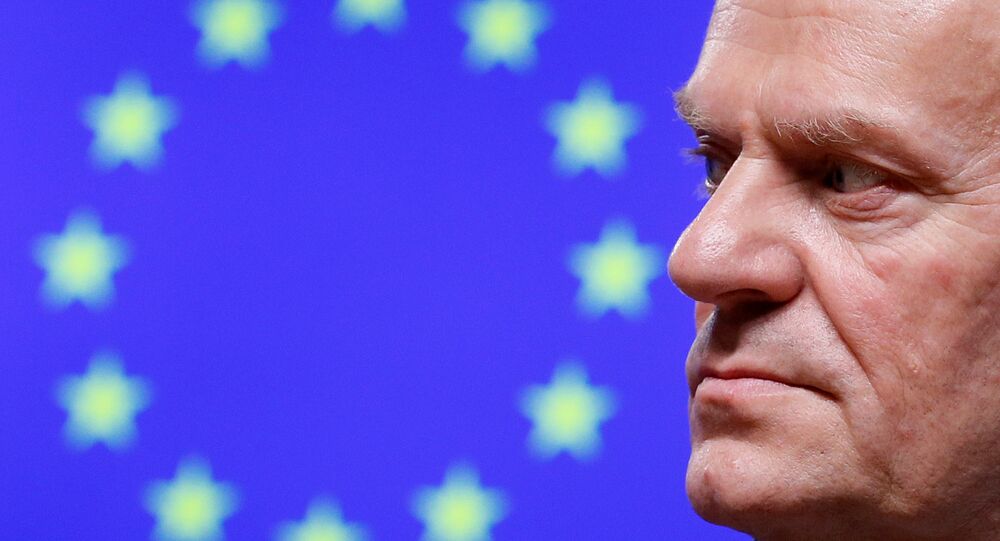 Donald Tusk could well become the first European Council (EC) president to be re-elected to the post against the will of his own country's government - Poland's ruling Law and Justice (PiS) party has not only barred Prime Minister Beata Szydlo from backing Tusk's candidacy, but put forward an alternative candidate.

On March 9, EU heads of state will meet for a two day summit, and "elect" the EC President — Tusk is widely considered a shoo-in for a second 30-month term. However, the Polish Ministry of Foreign Affairs has formally nominated Jacek Saryusz-Wolski, an MEP from Tusk's center-right Civic Platform, in his place — on the basis that Tusk was a "German candidate."

Furthermore, PiS MEP Karol Karski told a local radio program that Tusk had published tweets supporting Poland being hit with fines of €250,000 (US$265,000) for each refugee it failed to relocate from Italy and Greece — although no record of such tweets exists.

Saryusz-Wolski, an MEP since 2004, will likely be unheard of in Western Europe, although he served as one of the Vice Presidents of the European Parliament between 2004 and 2007, and Chairman of the EU Foreign Affairs Committee between 2007 and 2009.

Despite being a Civic Platform member, he has been at odds with the party's higher echelons for some time, and was banned from representing the party's delegation in the European Parliament. In the wake of his nomination for president, the party has moved to formally expel him from its ranks — and European People's Party group president, Joseph Daul, has summoned him to an emergency meeting, where it's likely Saryusz-Wolski will lose his position as vice president of the group.

I just summoned EPP VP @JSaryuszWolski for an explanatory meeting first thing on Monday in light of latest news. 1/3

The EPP statutes clearly state that any EPP VP must be a member of an EPP member party & I fully respect the decision of @Platforma_org. 2/3

As already stated before, the EPP family stands fully behind its candidate for @eucopresident Donald Tusk. 3/3

Furthermore, EPP Chair Manfred Weber issued a statement saying Saryusz-Wolski would be expelled from the group entirely unless his candidacy was revoked.

"It is symptomatic that the Polish government once again pursues a Polish domestic policy agenda, and has completely abandoned any constructive ambition at European level. Every further attack on Donald Tusk will only jeopardize Polish interests in Europe," he said.

Saryusz-Wolski has amassed a fairly sizeable Twitter following and he regularly posts, occasionally in English. In a March 5 tweet, he attacked Tusk, although stopped short of naming him, saying that "no government would allow itself to support [a] candidate who abuses [their] international position to actively instigate opposition against democratic verdicts."

Tusk is the second European Council president since the post was created following the Lisbon Treaty. Both he and his predecessor, Herman Van Rumpoy, were Prime Ministers at the time of their election.

The failure of Poland to endorse the re-election is unsurprising, given the harsh brickbats hurled at Tusk by PiS over the course of 2017. Foreign Minister Witold Waszczykowski has been particularly vicious in his condemnations, describing Tusk in January 2017 as "the icon of evil and stupidity."

Weeks later, Waszczykowski again eviscerated Tusk, his failure to visit his home country for talks with the government while seeking re-election. The "absurd" Tusk, Waszczykowski said, was "behaving grotesquely, ignoring his own government."

The rift between Tusk and Kaczynski runs deeper than political differences — Tusk was Polish Prime Minister in 2010 when Kaczynski's twin brother, President Lech Kaczynski, died in a plane crash near Smolensk, Russia, along with many other high-ranking state and military officials.

Kaczynski has long-alleged Tusk bears moral responsibility for the tragedy, accusing him of not assuring better security procedures. Reports have even suggested Kaczynski told German Chancellor Angela Merkel that he might issue a European arrest warrant for Tusk over his alleged role in the crash.

PiS leader Jaroslaw Kaczynski has also lashed out at Tusk, saying in a February radio interview that it was "not in Poland's interest" for "someone like that" to sit as president, as Tusk had damaged Poland's national interests.

The standoff between Tusk and the PiS is just one of the battles being fought between Poland and the EU. The sides have conflicting views on the degree of autonomy that should be afforded to EU member states, with the PiS alleging the EU seeks to strip national governments of power to boost its own, and the EU asserting "the European model of democracy" is being undermined by the PiS constitutional reforms, which in turn poses a "strategic risk" to the EU itself.

The ongoing spat between Poland and the EU has led to calls from many European leaders, most recently, Luxembourg's foreign minister, for Poland to be expelled from the bloc.

"Poland no longer respects the Copenhagen criteria that the country had to meet before EU accession… the government is more and more involved in restricting the rule of law," Minister Jean Asselborn said.