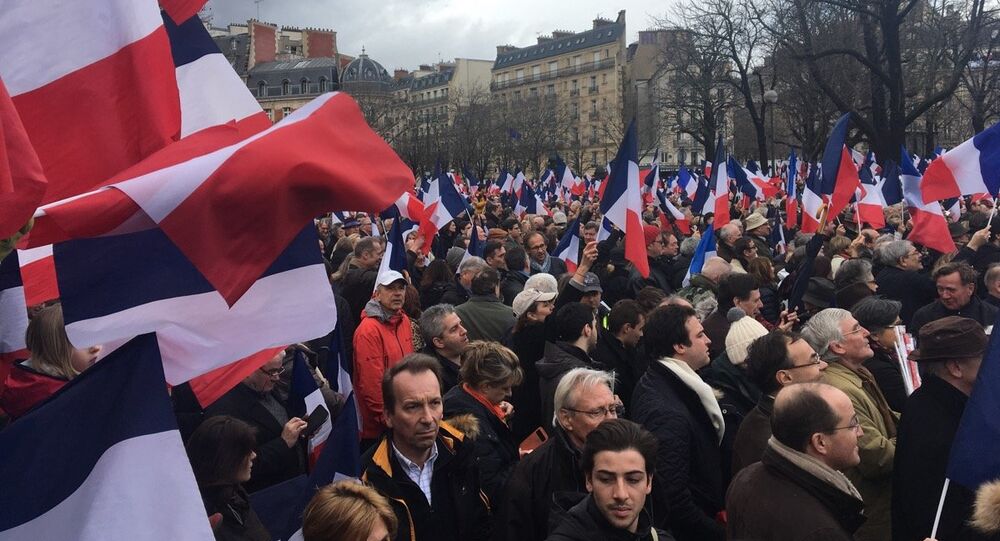 Fillon Rallies Supporters as The Republicans Look for Solution to 'Penelopegate'

French presidential hopeful Francois Fillon on Sunday rallied thousands of supporters in Paris amid the escalating "Penelopegate" corruption scandal around his wife's fake employment while his party The Republicans pondered over a "plan B" on what to do with its embattled candidate.

© AP Photo / Francois Mori
Francois Fillon’s Wife Wants Him to Continue Presidential Race 'Until the End'
MOSCOW (Sputnik) — In January, an investigation was opened following media reports on Fillon employing his wife as his parliamentary assistant, for which she was allegedly paid without performing her duties. The employment by Fillon of his children was also questioned by the media.

The center-right candidate has repeatedly denied all accusations and pressed on with his election campaign despite a dip in popularity. His party has been pressed to look for alternatives for his candidacy, with his former primaries rivals among those rumored to be up for replacing him.

Fillon has called the media storm a "political assassination." He is expected to face investigators on March 15, after which formal charges may be made.

The first round of the French presidential election is scheduled for April 23, with the run-off set for May 7.

"They think that I am alone. They want me to be alone. Are we alone here?" Fillon said at Sunday's rally on the Place du Trocadero square, with the crowd chanting a resonant "no."

© REUTERS / Philippe Wojazer
'They Think I'm Alone': Fillon Addresses Thousands of Supporters in Paris Amid Penelopegate Scandal (PHOTO, VIDEO)
He went on to address accusations over his wife's fake employment that had generated a media storm ahead of this year's presidential election.

"Despite the fact that the accusations against me are unfair, insulting and are used for specific ends, I should apologize to you. In particular for the fact that I have to defend my honor and the honor of my wife while I should be defending the country," he said.

Fillon admitted to making a mistake by employing his wife as his assistant but vowed to press on with his campaign despite the mounting obstacles.

© Sputnik
Thousands of supporters of French presidential hopeful Francois Fillon attending a rally to support the politician in Paris on March 5, 2017.

"It is my fault that the project which I represent has encountered such obstacles. I made the first mistake when I asked my wife to work with me. The second one was how I went about telling you about it," he told the crowd.

Over 40,000 people were set to attend, with Fillon's website asking participants to avoid bringing banners in order to avoid any controversy. Participants only brought French flags with them which they waved vigorously during the rally.

© AP Photo / Francois Mori
French Presidential Election: Poll Shows 71% of Voters Want Fillon to Quit Race
Opponents of the candidate also took to the streets on Sunday, gathering at a rival event on the Place de la Republique. The demonstrators protested against corruption among presidential candidates as well as calling to respect "the press, the courts and the people." The first anti-corruption rally took place in late February.

Despite the show of support, Fillon's chances of victory have waned. Recent polls indicated that Fillon's former primaries rival Alain Juppe could beat both right-wing Marine Le Pen and independent Emmanuel Macron in the first round of elections. Meanwhile, Fillon's own voter support slipped from around 25 percent to less than 20 percent as the Penelopegate scandal unfolded.

"I will continue to tell my fellow party members that they both do and don't have a say, as the final say belongs to you," Fillon said at the rally.

© REUTERS / Eric Feferberg/Pool
Juppe to Come Second in First Round of French Election if Replaces Embattled Fillon - Poll
The Republicans has been feverishly searching for a way out, with former President Nicolas Sarkozy and former primaries contestant Alain Juppe among those most active in the search for a solution.

Sarkozy met with party heavyweight and Senate Speaker Gerard Larcher as well as party Secretary-General Bernard Accoyer on Friday before talking to Juppe on Saturday.

On Sunday, Provence-Alpes-Côte d'Azur Regional Council President Christian Estrosi, a party member, said that the party plans to shortly propose a solution to the dead-end situation.

"We will voice an initiative on Fillon in the coming hours," Estrosi said.

The proposal may be made by the early hours of Monday, he added without outlining any further details, but noted that it was backed by several other regional heads, including Hauts-de-France's Xavier Bertrand and Ile-de-France council head Valerie Pecresse.

Fillon Addresses Thousands of Supporters in Paris Amid Penelopegate Scandal